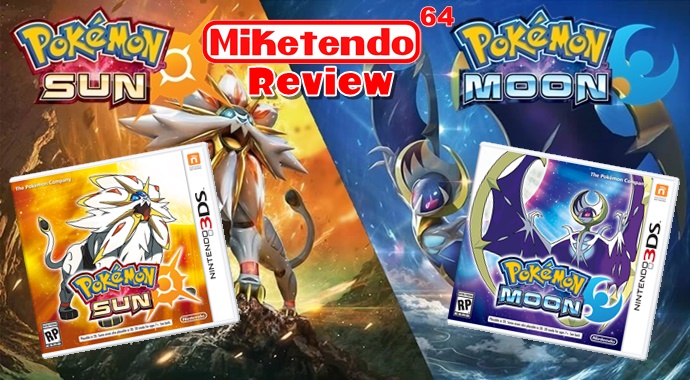 No Jacktendo Review this time around, just a singular lengthy review on Pokémon Sun & Moon, penned by yours truly, a born again Pokémon fan and the Editor-in-Chief of Miketendo64.

I’ll be the first to admit that this review has been a long time coming, what with me taking my sweet time with writing all of this, but then can I help it if Pokémon Sun & Moon are so addictive? Sure I only needed to play through one of the titles to write my review, but where’s the fun in that? So I brought both, played both and even completed the Rotom Dex in Moon and am now ready to get this spoiler free review underway.

There were fears that Sun & Moon would be a reboot and although many have said it isn’t, I’d gladly hold my hand up and say “yes, yes it is a reboot.” Gym battles and badges are gone, as are HM’s and the regular rulebook that most Pokémon games were built around and you know what? Their loss only added to the games appeal. Because old traditions are gone and replaced by things such as Poké Ride, Island Trials and Totem Pokémon, Sun & Moon was able to shine and feel like a whole new experience Gen 7 in a nature, but a true Gen 1 experience that is reminiscent of Red and Blue.

Then of course there’s the story, although some games have boasted a decent enough story, it was pretty much the same story, just reused and reworded, up until Gen 4, after that the stories started to get better, but they are not a patch on the story Sun & Moon has. Sure a few childish jokes are still in there and Team Skull come across more as a comedic act, as opposed to a team of youths wishing to steal Pokémon belong to others, but Sun & Moon has a great more mature and darker story than previously scene. Part of that which makes the story so dark is the inclusion of the Ultra Beasts, who are certainly a surprising twist. A twist that feels a forced, especially in the post-game when they are literally forced down the player’s throat, and you are instructed to catch multiple versions of them.

But what really makes the story stand out the way it does is the focus and emphasis on character development and relationships, it feels like Game Freak spent more time building on these things and it certainly paid off as the blossoming relationships between the protagonist and those he or she depending on your preference, encounters. Then there’s the characters themselves, Lillie the runaway, Nebby who refuses to stay in the bag, the lovable Hau who makes for worst kind of rival, Gladion and of course, Professor Kukui. If you prefer your Pokémon Professors to wear a t-shirt, then you will hate Kukui and if you prefer them to not where a t-shirt, just remember Kukui is married, so hands off ladies and gentleman.

Moving away from the story and the characters who help drive it, let’s talk about the setting of the new game. Far removed from other regions previously explored in the main series of Pokémon games, Alola is a region that takes huge inspiration from Hawaii and is made up of five islands. Although one of those five islands is man-man and belongs to the Aether Foundation, a group dedicated to Pokémon Conservation. As far as Alola is concerned though, it truly is a beautiful region, with a lot of stunning scenery to take in and locations to explore. And to really make the games stand out, there is a huge difference between the two games and that is they are set 12 hours apart, so while Sun is played at real-time, when you’re playing Moon during the day-time, get ready for some night-time Pokémon catching!

As for the protagonist’s journey through the game, because Gym Badges and Battles are gone, the protagonist undertakes the Island Challenge, a series of trials that stretch across four islands. Not all of the trials require a battle, most of them will test your memory and focus and see you collect a number of items, but battling is still present. Especially high-powered battles against the Kahunas, the toughest and most skilled trainers, with one residing on each of the four islands, Melemele, Akala, Ula’Ula and Poni. If you don’t take their Pokémon down as quickly as you can, they will unleash their full might upon you by using a Z-Move. An all powered move that can only be used once per battle and requires the player to have both the Z-Ring and the correct Z-Crystals assigned to their Pokémon partners.

But don’t worry, Z-Moves have not replaced Mega evolution, Pokémon can still Mega evolve, but that isn’t available until way late in the game, during the post-game adventures and there aren’t any new Mega evolutions either, due to focus going elsewhere, now what of the new Pokémon? Well as always a main series Pokémon game would be a Pokémon game if there weren’t a ton of Pokémon for us to catch, so that’s why we have 300 Pokémon that can be caught and registered to your Rotom Dex, with the option of getting Magearna via QR code and even more Pokémon that are only available via Island Scan. The way Island Scan works is by enabling you to scan QR codes belonging to Pokémon caught by yourself and others, so that you can scan them to add their data to your own Dex and rack up a number of points, which once it hits 100, you’ll be able to scan the island your own for an ultra rare Pokémon. These ultra rare Pokémon consist of Pokémon we’ve seen from previous gens, but can only be caught in Alola via Island Scan, but if you do set out to catch them all, just know there are 7 on each of the four trial islands and the Pokémon do change daily as part of a weekly rotation.

As for the Pokémon you can catch, due to the lower number of available Gen 7 Pokémon, a lot of them are actually really hard to find. Not only can some be found during S.O.S chain battles, whereas some, despite appearing in a number of available areas, are just really hard to encounter due to their rarity rate, but if you stick to it, you can go on to catch them all and raise a formidable team. Still just because Pokémon is in the title, it doesn’t mean there game is all about the actual Pokémon, there’s plenty of new features to, although a lot of them do heavily centre around Pokémon.

For starters there’s Poké Ride, which is exactly what it sounds like. There’s Poké Finder, which sees you use your Rotom Dex as a camera and take photos of Pokémon you encounter in specific location. There’s Poké Pelago, a really cool function with a whole range of islands that can help you grow berries, encounter Pokémon who can be added to your team and even raise your team if you choose too. Then of course there is the Festival Plaza, a place where you can trade, battle and encounter trainers from other games and complete little missions to earn Festival Coins that can go a long way and be spent on all manner of items and there is also Pokémon Refresh. A nice little way of showing your team how much you care about them, cure any of their ailments and treat them to a snack when they deserve it. Then of course there is the Battle Royal and trainer customisation! Don’t like the way your character looks? Not a problem, there are clothing stores on every island except Aether Foundation and there are a range of options, so finding something you like is very likely!

Now because I can go to an even greater length talking about these games, I think now is as good a time as any to wrap this review up. So as far as the Sun and Moon games go, there really is plenty to see and do and after hours upon hours fully immersed in the Alola region, I can honestly say they are the best instalment we have seen in the main series games in a long time and they just have it all. Great story, great region, great graphics and even a great soundtrack, so they deserves a great score and that score is 9/10! Great job Game Freak, you really knocked it out of the park! So if you haven’t got any of these games yet, you really should, only make sure you play it on a New 3DS as opposed to a 3DS as the New 3DS offers a smoother experience.