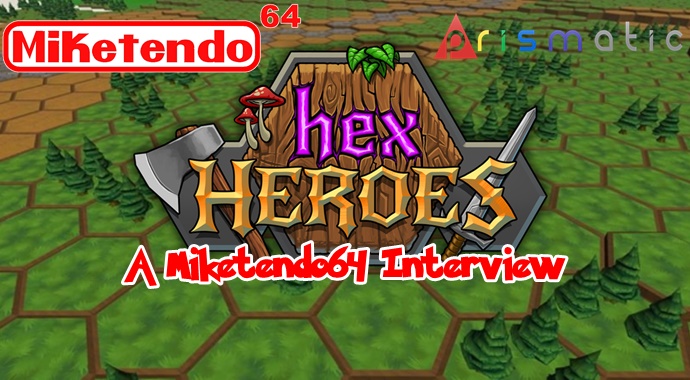 Prismatic Games: A Miketendo64 Interview (Getting Down with Hex Heroes)

In 2013, Prismatic Games was founded and if you’ve never heard of that name before then there’s a good chance you have never heard of Hex Heroes either. Well Hex Heroes is an upcoming title for the Wii U and you know what, it may look a little odd, what with being very different indeed, but it also looks a lot of fun and is bound to be one of those games that take us by surprise.

So with it being a game that is bound to surprise us, it’s only natural to want to contact the guys behind the game, find out how the game is doing and of course ask a bunch of questions pertaining to it, so that’s what we did. Not only did they take our questions, but they did answer them and we can now share them with you all, so it’s time for a little Hex Heroes/Prismatic Games Q&A:

Miketendo64: “Right off the bat, what’s the latest with regards to Hex Heroes? Are you any closer to announcing a release date and will the release still happen this year?”

Chris Jennewein: “While we’ve strived for a couple dates in the past, optimization on Wii U and certification throw too many unknowns in the mix. We’ve burned our backers announcing hopeful dates before, and right now we don’t want to reveal a date until it’s something we can truly promise.”

A Simultaneous Release is Planned:

Miketendo64: “Can we expect to see a simultaneous release across all regions, or will it be one after the other?”

Chris Jennewein: “We plan to release Hex Heroes in all markets simultaneously. We’ve already started building our relationships with other Nintendo regions.”

A Retail Version Could Happen (Does Depend on Digital Sales Though):

Miketendo64: “Any chance of Hex Heroes seeing a retail release, or will it solely remain available as a digital purchase?”

Chris Jennewein: “Retail releases usually come after a really warm digital reception. If the game’s beloved enough, and a publisher/distributor is willing, then we’re down.”

Miketendo64: “During your last update on Kickstarter, you wrote about how you managed to finally find an answer to your combat issue. What other issues have you had with the game since development first began?”

Chris Jennewein: “Outside of some minor revisions to visuals or player abilities, optimization has posed the biggest issue. In the update prior to our combat update, we discuss how our map-builder needed a total overhaul to be less taxing on Wii U hardware. We’re still ironing out some quirks since Unity development on PC isn’t a complete 1:1 experience to Wii U.”

Putting the Heroes in Hex Heroes:

Miketendo64: “From Shovel Knight to Rusty, Hex Heroes boasts quite the line-up of characters. Are there any plans for adding more characters to the roster or is the current 14 more than enough?”

Chris Jennewein: “Retail releases usually come after a really warm digital reception. If the game’s beloved enough, and a publisher/distributor is willing, then we’re down.”

Miketendo64: “Four cameo characters you wanted to include, but couldn’t were Beck, Shantae, Raz and Steve. Were there any other characters you wished to have been included or just those four?”

Chris Jennewein: “There were – we were hoping to land CommanderVideo of Bit.Trip.Runner or some other Double Fine characters. We especially wanted to push the diversity of our roster, but it’s pretty large nonetheless.”

Miketendo64: “That sucks, love that guy.”

Miketendo64: “Let’s do a little roleplay. You’re you and I’m someone who has never played/heard anything about Hex Heroes. Just exactly what is Hex Heroes?”

Chris Jennewein: “Hex Heroes is the world’s first Party RTS (or Par-Tee-Ess). Like any classic RTS, one person can play the commander, managing resources, placing buildings, and upgrading their team from a bird’s eye view of the world. That team that’s normally made up of NPC’s, however, are up to four of your friends on the couch, harvesting, fighting, and exploring the map on the ground level. You work together sharing knowledge and coordinating abilities to hunt down enemy lairs and rid the world of evil!”

The Different Classes of Hex Heroes:

Miketendo64: “Having play-tested Hex Heroes, what is your favourite character/role/class to play as and what has been your favourite moments during the long development phase?”

Chris Jennewein: “This is a tough one to answer since our new combat has kinda thrown previous experiences out the window. But overall we’re very happy with the roles that each class plans to fill. If you like to brawl then you’ll want to go Knight. If you’re more tactical, then you can count on the Rogue. We both have different playstyles so we gravitate to those corresponding classes.

By far our favorite moments have been meeting our backers at events. It’s always a boost to our morale when we meet fans! Everyone is cheering us on and we can’t wait to get Hex Heroes into their hands.”

Miketendo64: “Indie games are truly taking over the gaming world as more indie titles are being wholeheartedly welcomed and loved. Do you have a favourite indie game or two that has released this year?”

Mario Castañeda: “While it wasn’t released this year, I finally played Undertale a couple months ago and it’s easily in my top 10.”

Chris Jennewein: “A few Kickstarter games that we’ve backed (Jotun, Earthlock, and Duelyst to name a few) have come out recently that have been great!”

Miketendo64: “Oooooh Jotun. LOVE that game. Thunder Lotus Games knocked it out of the park with that one!”

Prismatic Games’ Next Project (No Spoilers!):

Miketendo64: “When Hex Heroes is finally done and in the bag, will you be moving on to another game of a similar nature, or something else entirely?

Chris Jennewein: “Our development pipeline is to always be drawing from our last game to make the next. We’ve built some great tech with our map-builder, so our next project will involve pulling from that. That’s all we can say for now.

You could argue we only touched on the surface of Hex Heroes, but honestly, giving everything that’s already going on this month, there’s already a lot of information to digest and commit to memory, so these Hex Heroes details are more than enough. Besides, we just means we get to learn more about the game closer to its release and because Chris has one last thing to say, here he is with a message for the Prismatic Game fans:

“I think we’re all starving for games like Hex Heroes. So many of today’s multiplayer games require everyone to have their own console and we can’t all lug a TV and equipment to our friends houses whenever we want to play in the same room. We’re trying to capture those feelings we had from older games and also ensure that the new generation doesn’t miss out on what we had. Other than that, every day we’re thankful for the backers that made this possible. We’re still committed to making the game you were excited for.”