Skip to content
3DS Reviews The Jacktendo Review Wii U 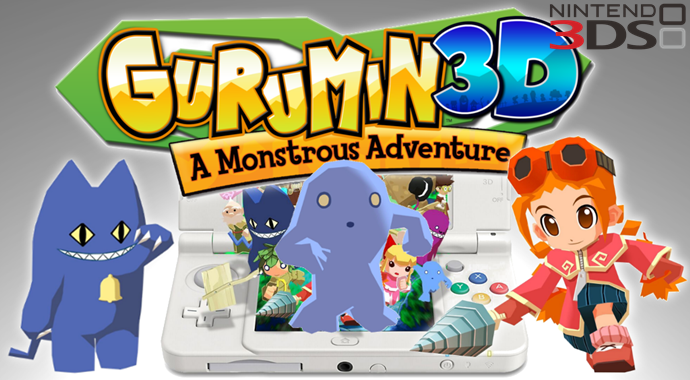 My name is Jack Longman and this is The Jacketendo Review, the two-in-one game review that caters to all kind of readers as it consists of both a fast and a short review and a slow and long one. Undergoing The Jacktendo Review today is action rpg for the 3DS.

*To anyone who’s here just for the score, you’ll find it at the end of the review.

Gurumin 3D in a Nutshell: (The Speedy Review)

Developed by Nihon Falcom and Published by Mastiff Games, Gurumin 3D is an action driven roleplaying game that casts a young girl named Parin as its heroine! Parin has just moved time but it’s a mining town and there’s no kids (talk about boring). But there’s also monsters, (not boring) and Parin befriends them, causing her to discover a whole new world.

Only that’s just the beginning of the game, so naturally something has to go horribly wrong and it does. Monster Village gets destroyed, Parin must wield a Legendary weapon and begin a long quest that would see her free her newfound friends, recover stolen items and give the Phantoms the beating they deserve.

The story may not be the greatest in the world, but the game does have some decent tunes, plenty to do and yes the game looks a little childish, but it is not a child’s game. Sure a child could play it, but so can adults and that is very good thing indeed because it means the likes of me can enjoy it for hours on end without being having to be worried about being judged! Long story short, Gurumin 3D is a delightful game and one that belongs on every gamer’s 3DS!

Recently published by Mastiff Games, Gurumin 3D is a game with a long history as the game’s initial creation dates back to 2004. Developed by Nihon Falcom, Gurumin was released in Japan on Christmas Day and since then it has undergone one hell of a journey as it’s gone from Windows to PSP and then Steam before at long last, it has finally made its way to a Nintendo platform and I have to say, Gurumin feels right at home on the 3DS.

Yes it is pretty much the same action rpg we saw released 12 years ago, but Gurumin is something of a classic, just like Ocarina of Time is and Gurumin has never looked so good and even now over a decade later, Gurumin’s story holds up, but just what exactly is its story? Well one day a young girl called Parin moves to Tiese Town, to live with her grandfather, not because her parents have died mysteriously, or tragically, but because they’re adventurers and they’re off exploring ruins, so off to grandpa it is. Only thing is grandpa can be a bit forgetful and he’s supposed to be the Mayor of the mining town Parin must now call home. But straight away there’s a problem, being a child in a mining town, there’s only one other close to Parin’s age, so as far as making new friends go, it’s not as simple as Parin hoped it would be.

Still just because there’s no real children to play with, that doesn’t mean there aren’t any monsters she can befriend and when she saves what she believes is a child, a friendship is soon made and that blossoms into something very wonderful, a trip to another world where monsters come in all kind of shapes and sizes. One friendship becomes a friendship with the entire population of Monster Village, and then all the trouble begins. We’re talking the Monster Village getting destroyed, monsters being taken and requiring you to save them after enduring some fun boss bottles and there’s a whole manner of items that are spread out across the world and collecting them is highly important as a Happy Monster keeps the Dark Mist at bay! There’s also a ton of Phantoms to fight and an evil Prince!

The simplest way to describe Gurumin is to quote Bill Swartz, (CEO of Mastiff Games), quote the journalist who told him about Gurumin: A Monstorus Adventure: “It’s Mario with short range projectile weapons mixed in with Zelda” and I can honestly say it does live up to that description. Yes there may not be any complex narrative, and you could say there are a couple of “technical blemishes” if you will, but it does offer plenty of challenge, has numerous game difficulty modes for you to play through, (including CRAZY) but there really is a lot to do.

Although the game may seem linear, taking you from one dungeon to another, to a forest, to a mountain and beyond it’s not. In fact if at any point you feel like doing a side-quest, play a mini-game, or even just pay a visit to town refresh your supplies, you can do just that! How you play Gurumin is down to you and when you do eventually come to the end of the game have every last item, upgrade, part and S Rank on every level there is to play, there’s a New Game+ option that’s just waiting for you to click on it and start the adventure from the beginning all over again!

While each level does vary from the other, S Ranking them is fairly simple, all you have to do is kill every monster you encounter and destroy every pot and open every chest a level has to offer. Finding all the pots and chests can be a little hard, especially when you don’t know how many are on each level, so it’s a good thing you there are a number of items you can collect, specifically items for Parin to wear on her head that offer a little something special. For example, when wearing Cat Ears, the screen will display the number of pots and chests left in each area of the level, whereas the Goggles can go from reducing damage Parin receives in water to making her not receiving any at all. But whatever you decide to wear, there is always one thing that will stay the same, the drill Parin wields. Although saying that, you can assign a different elemental attributed item to your drill, and buy new parts for it that enable you to learn some rather special moves that do some damage when used right. Also considering that the boss battles are actually pretty decent.

Two things though that would put players off this game is the sense of humour throughout. Not every is going to like the jokes and not everyone is going to appreciate them, just like they’re not going to appreciate the boing! noise Parin makes every time she jumps, and sure you could turn the volume down so you hear it less, but then you rob yourself of hearing everything else the game has to offer, but as far as this gamer is concerned, I loved Gurumin and I greatly appreciated everything it had to offer and that is why I rate Gurumin 3D for the 3DS, an 8 out of 10!