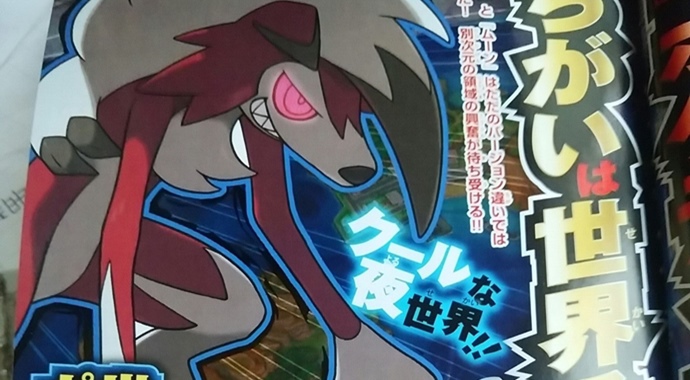 The CoroCoro scans are in and there is no sign of Alolan Ekans and Arbok, so that rumour post we did yesterday, was just that, a rumour, so how about we talk about what is confirmed!

We may not have been graced with the evolved form of the Alola starters, but we did get to see the Pokémon Rocruff evolves into! Except Rockruff’s evolution Lagarugan doesn’t have one form, but two and form grey is the result of a Rockruff evolving during the day time, whereas the Lagurugan with red markings is the result of Rockruff evolving during the night-time. According to the translation by Serebii, during the diurnal hours, Rockruff takes on the Midday form, but when it’s night and the moon is out, Rockruff becomes infused by the powers of darkness and assumes the Midnight form.

Also shown in the scans is some Munchlax news, regarding the special giveaway we first learned about during the Nintendo 3DS Direct, and we get to lay eyes on another Ultra Beast, UB-02, who depending on what game you’re playing, will be a different UB-02. Exclusive to Pokémon Sun is UB-Expansion, who is shown battling Tapu Koko, whereas UB-02 Beauty is a Pokémon Moon exclusive and is also shown battling Tapu Koko.

According to the scans and translations we’ve received, UB-O1’s name is “a mystery, but may have a deep meaning,” but in next month’s issue, Type: Null’s full power will be revealed. As far as Sun & Moon game news goes, that’s everything, but we did also get some Sun & Moon anime news as well! The series is entitled Pokémon (Pocket Monsters) Sun & Moon and appears to feature a younger Ash, traveling/living in the Alola region. The series is set to air in November and will see Ash receive a Z Ring and meet Melemele’s Island Guardian Tapu Koko, as well as see Ash attend school and strive to “graduate like never before.”

With more Sun & Moon news already revealed to be announced this week, all of the above is by no means the last bit of news we’ll be getting Pokémon-wise,