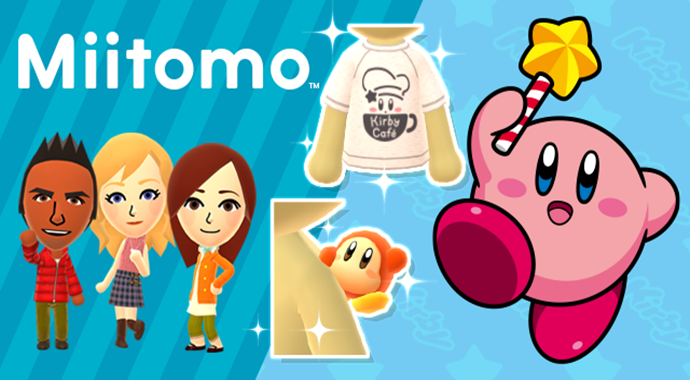 Miitomo’s Next Star Collab is With None Other Than Kirby!

September 9, 2016 9:14 am Published by Jack Longman Leave your thoughts

The Metroid collab may be set to continue until the 15th of September, but come the 16th Miitomo will be replacing Samus Aran with Kirby as a whole bunch of items will be available via Miitomo Drop! Our gift box, the Miitomo Shop and My Nintendo, but before we even get to that stage, there’s a retweet event happening right now!

From now until the 2 am UTC on the 13th of September, in order for Miitomo users to win their very own KIRBY CAFÉ Logo T-Shirt, the above tweets will need to hit 20,000 retweet. The good news is it doesn’t matter which tweet you retweet as all will be counted, so if one has 10 thousand, one has 9 and the other only having 1, we’ll still hit the 20,000 retweet mark. However, if you include a comment with your retweet, it will not be counted, so retweets only people.

Provided we do hit the 20,000 mark, the t-shirt will be distributed to our gift box on the 16th at 2 am UTC and we will have until 11 am UTC on the 13th of October, 2016 to collect it. But they won’t be the only items we will be able to get our hands on during that time period as there will be plenty of other collectibles. Firstly there will be the Kirby Hat also waiting for us in our gift box and Kirby is so hungry he’s literally going to try and eat our heads.

Then of course there’s a t-shirt of Kirby wearing his Robobot Armour that you can pick up as a reward from My Nintendo, as well as a Kirby and Qbby t-shirt.

And even then there’s another 8 items I haven’t told you about, such as a Waddle Dee Companion, that you can only get from the Kirby & Waddle Dee Miitomo Drop! stage. (Other items in the same stage include the 8-bit Kirby T-shirt, the Kirby hoodie and the Maxim Tomato Trainers.) As for the other stage you can hope to score some neat new outfits from, there’s the KIRBY CAFÉ stage (inspired by the actual KIRBY CAFÉ that opened last,) which others the following items: KIRBY CAFÉ Logo T-shirt, KIRBY CAFÉ Shirt, KIRBY CAFÉ Hat, and KIRBY CAFÉ Dungarees.

For anyone who hopes to get all Kirby items, as written above, you will only have from the 16th of September, to the 13th of October to do so. But if you have still yet to get all of the Metroid gear, they’re only sticking around to the 15th so you’re going to have to work fast in getting them.