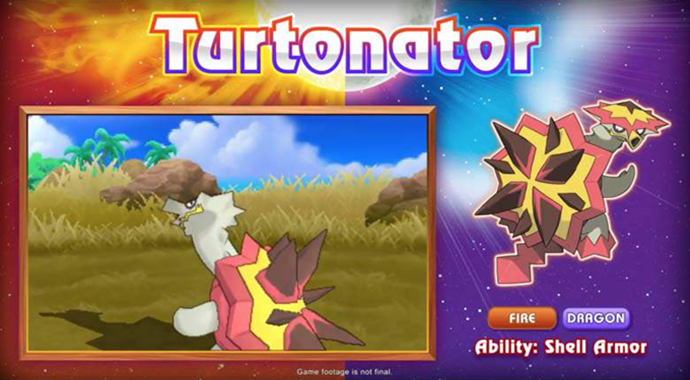 From the moment it was revealed gameplay footage would be shown at Gamescom 2016 this week, excitement was in the air and it’s a good thing too, because the gameplay provided us with footage of the Battle Royal and a new Pokémon was revealed.

Move over Electrode, Turtonator is here to play and the Fire/Dragon-type is ready to blow, which makes perfect sense, since it is the Blast Turtle Pokémon. Besides an having an awesome type combo, Turtonator has the Shell Armour ability and knows Shell Trap, an all-new move, which causes Turtonator to lay a trap for opposing Pokémon and provided they hit the Blast Turtle Pokémon with a physical attack, the trap will then trigger and result in a devastating explosion.

Still, Shell Trap wasn’t the only move we got to learn about as the new footage also shows a Pikachu using the Normal-type Z-Move, Hyper Sprint Attack. (Provided the Pokémon using the Z-Move knows a move that is the same type as the Z-Move, the Pokémon regardless of its own typing will be able to use the Z-Move. Meaning if you have a Psychic with a Dark-type attack, it can use a Dark-type Z-Move.) And now that we’ve covered that, it’s time for the Battle Royal footage, so here it is:

With quite a bit revealed, what’s been your favourite bit of Pokémon news that’s come out today?