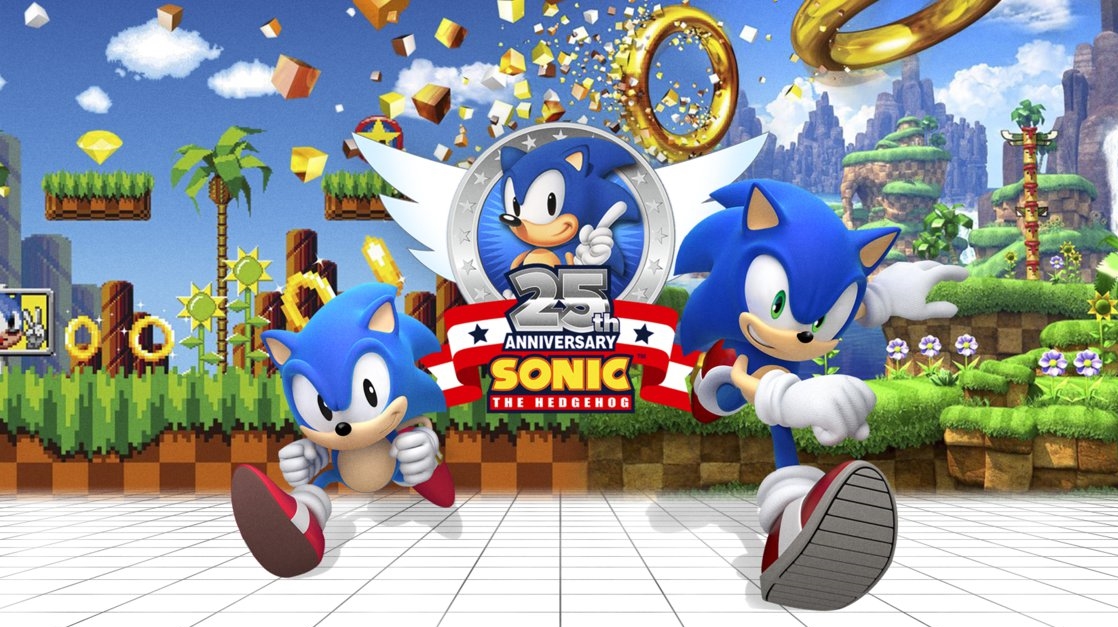 The year of anniversaries continues as the speedy, blue hedgehog created by Sega, celebrated his 25th last week and sure we should have done this on the day, (June 23rd) but with all the news that was expected to following the celebration, we felt it was best to put it off until now and then go over everything! Whilst at the same time dedicating another day to such a momentous occasion.

But why start with current events, when we can start with the history of Sonic instead, so we’re going to do just that. It was 1991 and Sega didn’t want just another character, they wanted someone who could be a mascot, a character that would make the company a leading company in the video game industry and Sonic proved to be all that and more. The hedgehog didn’t just go on to get a couple of sequels, he went on to get many spin-offs and made appearances in a number of Nintendo titles such as Smash and Mario & Sonic. But that’s the present, let’s go back to the early 90’s where Sonic games were releasing yearly, with plenty of spin-offs in between them. In fact there were so many games that there wasn’t a single year between ’91 & 99 that didn’t involve the speedster.

Sadly though, all of the hedgehog’s success wasn’t enough to stop Sega from continuing with creating their own consoles, but an ongoing partnership with Nintendo saw to it Sonic and all his friends would never leave us, as Sonic games have continued to come ever since and not just on Nintendo devices. Fast forward to now, Sonic has had quite a few mangas, TV shows, which includes the Sonic Boom series that also has two games already associated with it and Fire & Ice due for release later on this year, but he’s been in films too. First there was his appearance in 2012’s Wreck-It-Ralph, along with Tails (my favourite character from the Sonic universe) and Eggman, but there’s also a new Sonic film in the works and has been since 2014.

In short, it’s nearly 25 years later and Sonic continues to be popular and it’s a good thing too because Sega came out this week to confirm that there is a Completely New game in development by the Sonic Team. This is the statement Takashi Iizuka gave Famitsu earlier on the week and although specific details aren’t revealed, it is expected they will following during the 25th anniversary party next month on the 22nd of July.

“We at Sonic Team – are developing a completely new game, as well as developing a full movie, actively done by Sony Pictures, and animation on Sonic Boom. We are also ready to improve sponsor ties. The most important thing is not the fact the series survived for 25 years, but how many games was developed. Our goal – add something new and overcome any potential hardships.”

Still that won’t be the only statement we’ll be sharing this week, as we also have a comment from Iizuka regarding Sonic’s relationship with Nintendo and another comment from Ivo Gerscovich regarding Sega’s emphasis on quality. Both responses come from the latest issue of MCV.

Takashi Iizuka: “When SEGA stopped making hardware and just started doing software, the first platform that we released Sonic on was a Nintendo console. We felt from the very beginning, that the Nintendo platforms were where the passionate Sonic fans were. Historically that is where our relationship started with Nintendo. Unfortunately, the Wii U didn’t manage to get as many gamers on the hardware as we would have liked. That was unfortunate for Sonic because we didn’t get the mass of people to enjoy the content. But Nintendo has always been a great partner, we have Mario & Sonic at the Rio 2016 Olympic Games, Sonic in Super Smash Bros… we really appreciate the work that they do.”

Ivo Gerscovich: “SEGA is really – as of this last year – putting a huge emphasis on quality. One of the things about Sonic Boom: Fire & Ice is that we held the title for a year, which is not something SEGA has traditionally done, but this focus on quality is really about trying to take Sonic back to where it used to be.

We are really focused on turning Sonic into an entertainment icon, not just a games icon. We want to go across all platforms and elevate his status even further, which explains why we are doing so much.”

It is great to see Sega coming out and speaking out like this, especially since Sonic, like Link and Mario, is a character I grew up with and fondly remember, and even with what we shared above, that isn’t all we heard from Iizuka this week as we also found the time to tell us why Dr. Robotnik became Eggman and you can read his explanation here:

“When the game was originally developed in Japan, they called the character Eggman. That was the name of the character, but when the game got localized and ported into the Sonic the Hedgehog that we know in the West, they decided to, without confirming with the development team, change his name to Ivo Robotnik or just Robotnik. That’s kind of when everyone first learned about the character. Of course, this was without consulting the people who made the game. They just kind of went off and did it. It became super popular and everyone in the West kind of learned about the character as Robotnik.

That went on through the “classic” series in the Genesis/Mega Drive era, but as far as the developers are concerned – the ones who made the character and the leaders of what this character is doing next – we really didn’t want to have anyone in the universe with two names. To us, he’s Eggman, but in the rest of the world he’s called Robotnik. We wanted to unify that into one name moving forward. This is something I actually did in the Sonic Adventure series. I made it so that we understand the character’s name is Robotnik, but his nickname is Eggman, and as far as everyone is concerned in the world now, we’re just going to call him Eggman as his official name.”

The blue hedgehog is clearly sticking around as far as Sega is concerned and we couldn’t be happier about it and with the 25th anniversary part happening next month, don’t be surprised if Sonic snags a headline here and there in the meantime as plenty of new announcements have been promised, but what about you? It’s been 25 years of Sonic, have you got a favourite Sonic memory you feel like sharing? We’d love to hear it.

Source: @NE_Brian of Nintendo Everything, MCV & Natalie Levig of My Nintendo News