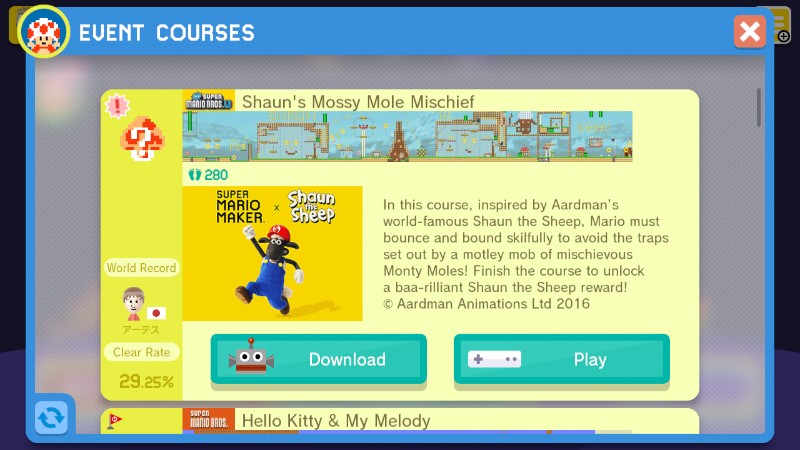 Shaun the Sheep Baa-asks in the Super Mario Maker Sun

Well the new event course took its time coming out today, far later than usual, but all is well now for the Shaun the Sheep costume can now be obtained for the new level is live!

I may not agree with his inclusion, but at least he is a character I am actually familiar, as Aardman and I go way back to Chicken Run and then even further back to the likes of Wallace and Gromit. Still if you’re expecting a course in which sees the sheep run riot in the Mushroom Kingdom, I’m afraid you will be disappointed as Mario is the only character running wild in the all-new, New Super Mario Bros. U styled event course, but what a whacky course it is! And because of just how much of a wild ride it is, we won’t be sharing the GameXplain footage of the course in action, like we’ve done the last two times, after all, we wouldn’t want to ruin the course for you now would we? So instead all you will find below is the course description and the costume trailer for Shaun, enjoy:

“In this course, inspired by Aardman’s world-famous Shaun the Sheep, Mario must bounce and bound skilfully to avoid the traps set out by a motley mob of mischievous Monty Moles! Finish the course to unlock a baa-rilliant Shaun the Sheep reward!

Without a doubt the costumes are getting wackier with every new instalment, but there’s nothing we can do to stop it except enjoy the ones we get and enjoy the bizarre and elegant levels that Nintendo make to go along with the new costumes!