BabyMetal’s METAL RESISTANCE Has Rocked into the Building! 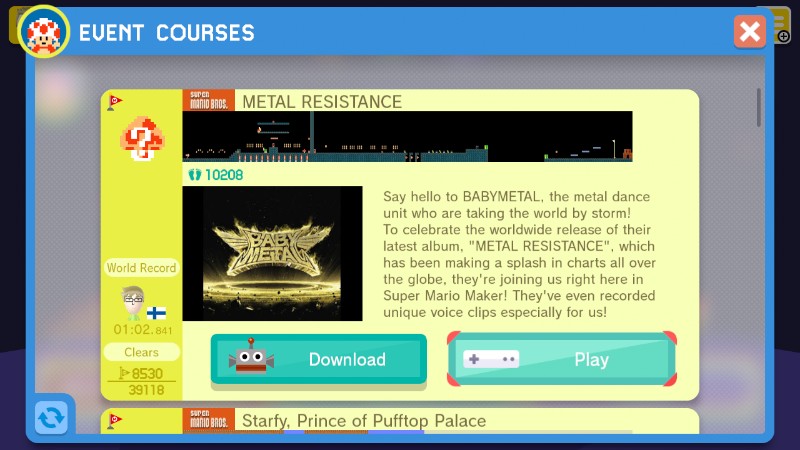 Love them or hate them, it no longer matters because BabyMetal are now a part of Super Mario Maker and there is no getting rid of them now!

With their second album seeing some global success, their achievement has truly been cemented into the latest Wii U offerings of the Mario franchise and they only went and done their own voice clips by recording them especially for Nintendo! Good news is as far as the event course itself goes, by the time when I played it, the level although only having 8,530 clears out of 39,118 attempts, for anyone who is after the costume, it’s actually a lot easier than we’re lead to believe. From hunting down those red coins to jumps that are a sheer doodle, you should finish this level in no time at all. Just be warned if you actually take it reasonably slow, you can do it in a single turn, but should you try to rush through it that’s when mistakes will happen and you’ll die. Still those checkpoints stop us from having to start from the very beginning! Still that’s enough from me, it’s time for a course description for those of you who haven’t played it and the character trailer!

Say hello to BABYMETAL, the metal dance unit who are taking the world by storm! To celebrate the worldwide release of their latest album, “METAL RESISTANCE,” which has been making a splash in the charts all over the globe, they’re joining us right here in Super Mario Maker! They’ve even recorded unique voice clips especially for us!

Still for those who are not interested in the character whatsoever, you can still get it just so you can then add it to every troll level you build afterwards. Think of it as your way of punishing them, you’ll soon feel better, just don’t make it too much of a troll level though or everyone will not like your level. Whatever your thoughts may be with regards to the newest costume, good or bad, we’d still like to hear it regardless!