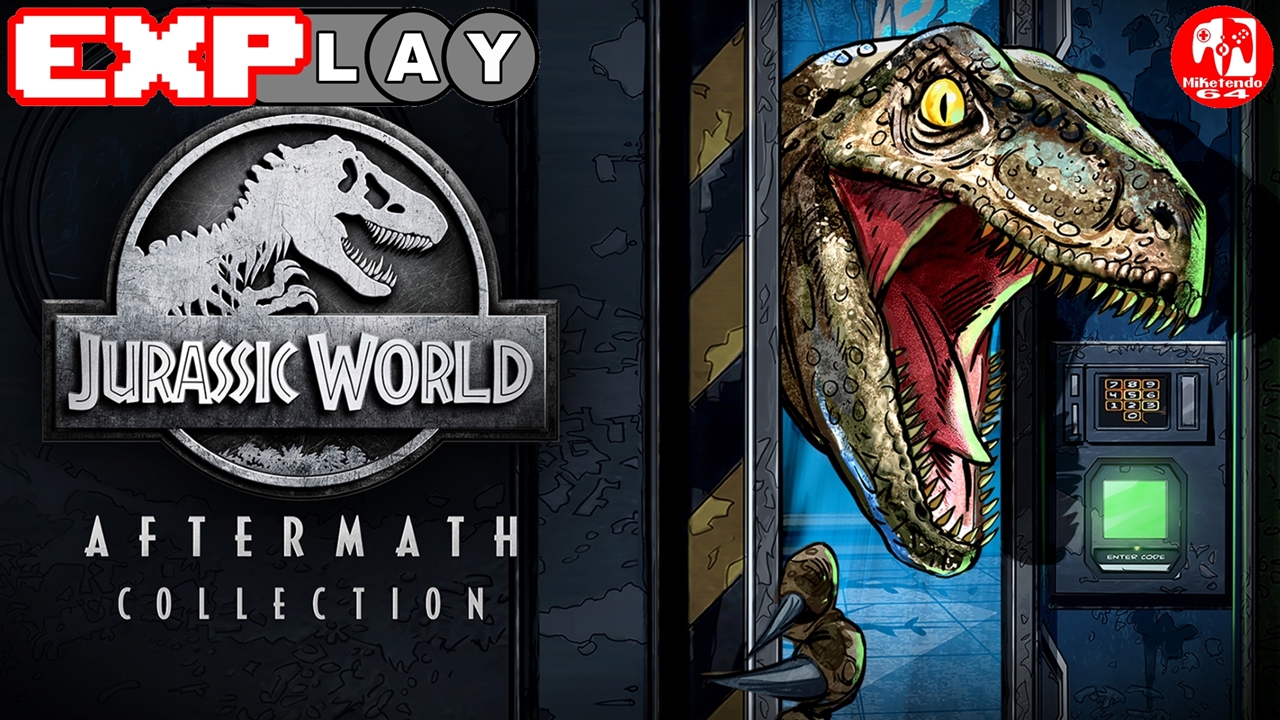 Welcome to EXPlay, (Explain & Play) the review series where we care not for scores but tell it how it is when it comes to every game we get our hands on, whilst also taking the time to include some lengthy gameplay, to give you the reader, the chance to shape your own impressions and views whilst watching and reading. In this installment, we’re covering Jurassic World Aftermath Collection by developer Coatsink.

Jurassic World Aftermath is a first-person, survival VR game developed by Coatsink. It was orignally released in two parts for the Oculus Quest and Oculus Quest 2 back in December 2020 (part 1) and September 2021 (part 2). In the third quarter of 2022, it was announced that Jurassic World Aftermath Collection (containing both previously released parts of the game) will be getting a non-VR release on Nintendo Switch which saw release in November 2022.

The story of Jurassic World Aftermath Collection takes place on Isla Nublar two years after the events of the film Jurassic World and prior to the events in Jurassic World Fallen Kingdom. The player takes on the role of Sam, a security expert hired by a geneticist by the name of Dr. Amelia “Mia” Everett. Sam and Mia are on their way to Isla Nublar via plane in order to procure a certain genome sample that had been left on the island after the Incident that caused the park to shut down. Just as they are preparing to land, the plane is assaulted by Pteradons and is forced to crash land on the island.

As Sam recovers from the crash, they wake to see a Tyrannosaurus Rex skulking around the plane and eating the pilot. Mia is still alive after already fleeing the wreckage before the T-Rex showed up. She has taken refuge somewhere while she tends to her wounds and keeps in contact with Sam via radio. Sam is left to defend himself with little more than their wits and a flashlight and must continue the mission as planned if they are to stand a chance of escaping the island.

Being so that Jurassic World Aftermath Collection has been ported from a VR game to a console game, a number of the controls and gameplay aspects have been reworked to make the game playable on Nintendo Switch. Motion controls are gone and players control what they see on screen (camera) by using the right joystick. In the center of the screen is a small cursor which will change its form when it hovers over an interactive object. You can press the A button to accept and B to cancel. Some interactive items may require you to solve puzzles like pressing A at the right time when the marker is within the goal area, pressing the directional buttons in a particular sequence, and using both left and right joysticks to rotate certain dials or manipulate sound waves.

The main objective of the game is to stay alive, collect the genome and get rescued. You have no weapons to defend yourself and your main key to survival is to remain out of sight of the dinosaurs. Throughout the game, you will be sneaking past raptors who are patrolling and hunting you. To do this, you have to crouch and crawl under tables, hide in lockers and use loud speakers to cause distractions. You can sprint for a limited time but it makes a lot of noise and the raptors will hear you. For the most part, you will spend the game in a crouched position to minimize the amount of noise your character makes by moving.

If you are not stealthy enough, you will be spotted by a raptor and it will chase you down. If you are lucky to make it into a locker or a deep enough crawl space, you can wait out the raptor’s attack until it tires of you and leaves you alone. If you are not quick enough, however, the raptor will catch you. As a last-ditch attempt, you can slide across the floor while sprinting. This is handy for getting into crawl spaces quickly should you execute it well. If you misjudge the angle, you may find yourself caught on the wall next to the crawl space and the Raptor will not waste time getting you.

Getting caught by the raptor or any other predatory dinosaur in Jurassic World Aftermath Collection is not game over though. You just get a red screen that fades to black and then you are taken to a menu where you can choose to restart from the last checkpoint or return to main menu. Often times, the raptors will most likely jump you right after you have unlocked a computer/solved a puzzle. Be sure that before you touch any computer, there is a locker open nearby or a deep crawl space where you can hide yourself the second you are finished at a terminal because those raptors will be on you in a shot.

Jurassic World Aftermath Collection is not a long game and can be beaten in several hours or so (longer if you keep getting killed by raptors, of course). The gameplay is rather linear and the puzzles are relatively straightforward too. They do start to become a little too routine but they do change in the later levels which were part of the second part DLC of the original VR game. Although it is not compulsory, there is a side quest of sorts that involves collectible cuddly toys. Some of the terminals in the game may highlight the location of a cuddly toy nearby but some may require a little backtracking which can be a little annoying at times but as it is not mandatory, you can probably just give it a miss.

For a VR game that has been adapted for Switch, it is far from a perfect port but it is still more than enjoyable to play. Yes, the controls may feel less receptive than that of VR motion controls and you don’t quite get that full-on immersive feeling without the headset and headphones. However, the game does still deliver an experience that keeps you on your toes from start to finish.

A lot of people have compared this game to that of Alien: isolation and I would have to agree, that I do get the same vibes from this game. The main difference is that thanks to the comic book-esque cel-shaded aesthetic, Jurassic World Aftermath Collection is nowhere near as terrifying and can be enjoyed by younger players (not too young mind) and older players alike. If you enjoy first-person survival games with dinosaurs then you should definitely keep this game in mind when you visit the Nintendo eShop next.