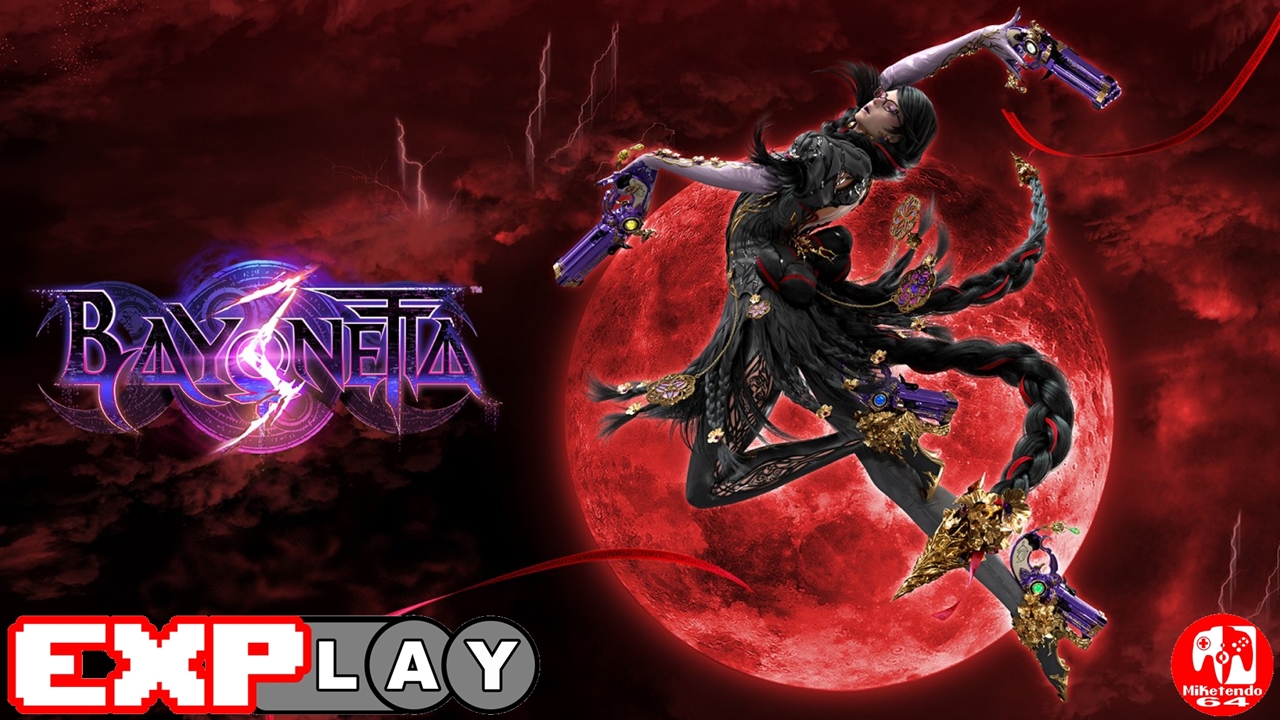 Welcome to EXPlay, (Explain & Play) the review series where we care not for scores but tell it how it is when it comes to every game we get our hands on, whilst also taking the time to include some lengthy gameplay, to give you the reader, the chance to shape your own impressions and views whilst watching and reading. In this installment, we’re covering Bayonetta 3 by developer PlatinumGames.

It’s been eight long years since the Umbra witch’s last outing (not counting the Switch releases of Bayonetta 1 and 2) but Bayonetta is back with a third entry to the series, Bayonetta 3. The game was announced back in December 2017 with a teaser trailer shown during The Game Awards. It wasn’t until September 2021 during a Nintendo Direct that the world would actually get to see an official trailer for the game and a look at the new Bayonetta sporting an all-new style. Roll on October 2022 and Bayonetta 3 is finally out on Nintendo Switch.

Bayonetta 3 takes place in an alternate reality to that of the first two games. In one reality, Bayonetta from the first game is engaged in a heated battle with a strange being that is neither from Inferno nor Paradiso. This mysterious entity has the ability to manipulate reality itself and because of this, Bayonetta is unsuccessful in defeating it and is defeated herself. A young woman and a man watch the battle from the sidelines but as Bayonetta begins to perish, she passes on her powers to the young woman. The man tells the woman who he calls Viola to escape along with a strange device. The man is then killed himself by the mysterious being and Viola narrowly escapes by activating the device and finding herself transported to another reality.

In what serves as the main reality for this game, Bayonetta has wrangled Enzo into chauffeuring her around the city of Shibuya (some things never change regardless of the reality) and tells him to drop her off at a cruise ship in the port where she is meant to meet someone. As she boards the ship, Viola falls from the sky and straight into Enzo’s lap. As she comes to from a daze, Viola tells Enzo that she needs to find Bayonetta and very soon after, strange humanoid beings begin to appear and wreak havoc through the city.

Bayonetta does what she does best and fights against these enemies that Viola reveals are human bioweapons called Homunculi. Bayonetta, with the help of Jeane (and some arsenal assistance from Rodin) try to put an end to the Homunculi assault but not before most of Shibuya is utterly destroyed. Viola warns Bayonetta that they must seek out devices called Chaos gears from other alternate realities in order to stop the Homunculi from destroying the multiverse completely.

Much like the other games in the series, Bayonetta 3 is a third-person action game where you must make your way through each level and defeat enemies. Most areas of each level you can freely explore but there are some sections where you will trigger combat and will have to dispose of all enemies in order to proceed. You can fight enemies by using punches, kicks, demon summons, and your guns. Depending on the order you throw punches and kicks, you can dish out some stylish combo attacks and finish them off with a demon summon attack. By holding down the ZL button, you can summon demons to fight in your stead. You can then use the punch, kick and shoot buttons to issue commands to your summoned demon so they can really lay down the pain. Bayonetta can also initiate Witch Time be avoiding enemy attacks at just the right moment. This will allow her to slow down time for a short period, giving her a window to really hurt enemies while they can’t counterattack.

After defeating enemies or your combo meter stops, you will earn orbs. These orbs can be used to unlock skills and combos in different skill trees for Bayonetta, her demons, and her weapons. Some skills require you to unlock other skills first before they in turn can be unlocked. You can also extend Bayonetta’s health by collecting Witch Hearts and extend her magic with Moon Pearls. These can be found hidden in chapters, challenges, or as purchasable items in Rodin’s Gates of Hell shop.

Back to the game’s combat segments, once all enemies have been defeated, you will be graded on your performance. There are three parables that are graded: Time, Combo, and Damage. The better you do, the better grade you will get, with copper being the absolute worst and pure platinum being the absolute best. You will then be able to move around again freely and can continue to proceed through the level. There are 19 levels or chapters that are part of the main story and then there are side chapters and Phenomenal Remnant stages that add more content to the game.

The side chapters appear after every three main chapters and are obligatory to complete in order to progress the story. The player also takes control of Jeane in these chapters and the gameplay changes to that of a 2.5D side-scrolling stealth game where you must navigate a series of corridors in a secured facility.

As for the Phenomenal Remnant stages, these are optional levels that will only appear after finding all three Tears of Umbran Blood in each main chapter. They are essentially challenges that you can play as different characters aside from Bayonetta (like Jeane or Viola). You can earn special rewards like weapons, accessories, extra Halos, and fight secret bosses in Phenomenal Remnants so it is worth going the extra mile to find the Tears of Umbran Blood in the main chapters and then taking on the challenges.

Bayonetta 3 takes everything that made the other games great and stays pretty close to the formula with some exceptions (if it’s not broken, why fix it?). The series is known for its wild boss fights and they don’t get much wilder than they do in Bayonetta 3 with a Kaiju showdown, a sultry bubble bath session and an opera sonnet (just to name a few). We are introduced to a new playable character, Viola. While Bayonetta can use an array of weapons like her guns, chainsaws, and giant bludgeoning weapons, Viola is armed with her trusty katana, can parry enemy attacks to enter Witch Time and can summon her loyal demonic feline Chesire.

If you have never played a Bayonetta game before, it is not a problem as the game has plenty of tutorials to walk you through the gameplay. The story itself is also not really connected to the events of the previous games so prior knowledge of the series is not essential as you can still very much enjoy the game but you will probably appreciate it all the more if you had played the other games.

Without a doubt, Bayonetta 3 certainly feels to be the best in the series and while it may struggle for GOTY with so many equally deserving games of the title this year, it should definitely be strongly considered being added to your Switch library, especially if you enjoy action games with oftentimes scantily clad ladies and tall leggy demon queens.