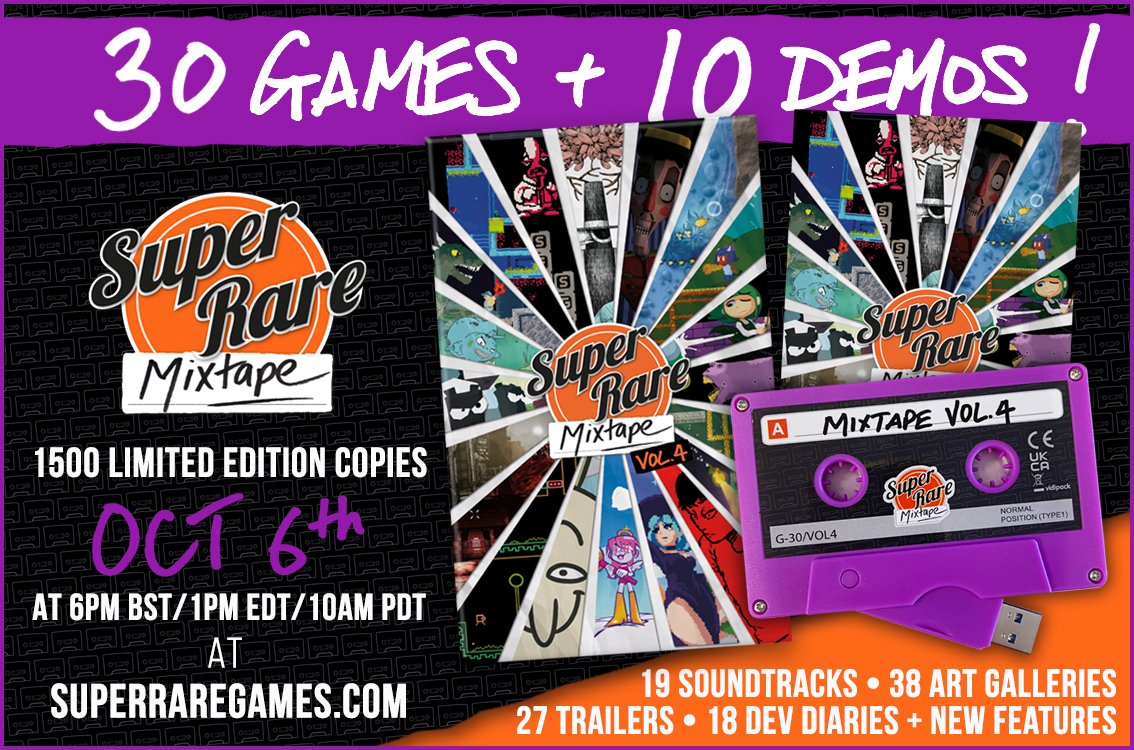 If you have been collecting the Super Rare Mixtapes from Super Rare Games, you may be excited to know that Super Rare Mixtape Vol. 4 goes on pre-order next week. On October 6th at 6pm BST/7pm CEST (10am PDT/1pm EDT), 1,500 copies will be available of the newly titled “Super Rare Mixtape Oct’ 22 Edition. It features 19 soundtracks, 38 Art Galleries, 27 game trailers, 18 dev dairies and an all-new feature; a built-in soundtrack player.

Below we have more details about what is featured in the Super Rare Mixtape Oct’ 22 Edition plus a message from Ryan Brown, the creator of these projects.

Our aim to preserve, support, and highlight amazing indies continues with this latest edition, featuring 30 games, 10 demos, and a ton of brand-new features that makes this edition the best ever – including a built-in soundtrack player! This is currently the 4th volume of a planned 5 in our initial numbered line-up (read below for more on the future of the Mixtape).

Only 1,500 copies will be available for sale this time, making this our rarest release ever. Catch your copy on October 6th at 6pm BST (10am PDT/1pm EDT) – available worldwide exclusively at superraregames.com

📼 30 games – a hand-curated selection of 30 games from grassroots indie developers, chosen for maximum variety of genres and art styles – there’s something for everyone!

💻 10 demos – harking back to the golden days of PlayStation demo discs and PC shareware discs, we’ve included a handful of demos for exciting upcoming commercial indie games that you may or may not have heard of

📼 USB tape cassette – your mixtape of games are fittingly featured on a USB shaped like a tape cassette, complete with a built-in custom launcher for easy plug ‘n’ play use on any Windows PC or laptop

💻 Collector’s box – a gorgeous slim box, designed to fit in with your games collection, also includes a full-colour manual with a full page dedicated to each of the 40 titles and a description on why they were selected for this collection

📼 Bonus features – dive into the history of these hidden gems with 38 art galleries, 18 developer audio diaries, 27 trailers, 19 soundtracks (with a built-in music player), and save your faves with a new bookmark feature – or hit the shuffle button and play a game at random! These features are primarily to preserve the stories behind these games that would otherwise have been lost to time

(*more copies have been printed in total as additional units were needed for the many developer samples; only 1500 will be available to the public)

Also includes demos for Astra and the New Constellation, Bullion: Curse of the Cut-Throat Cattle, Harmony’s Odyssey, Minishoot’ Adventure, Potion Prodigy, Pry into the Void, Schrodinger’s Catgirl, Snap the Sentinel, the machine that BREATHES, The Wreck


Future of the Mixtape: Currently, this is the 4th volume of a planned 5 in our initial numbered line-up, with any potential future volumes likely following a themed structure. We’re only planning for two volumes next year so far – wrapping up the initial line-up with Vol. 5, and our first themed volume in late 2023. Now is the perfect time to jump in to the collection if you haven’t already!

Super Rare Games keeps absolutely zero rights over these titles, which may continue to be available freely online – we simply hope to highlight & physically preserve them with this collection.

On a personal note – Mixtape is my passion project, my baby, and something anyone who’s met me knows means the world to me. Thanks to the Super Rare Games team, all the developers involved, and every single person who picks up a copy. You’re making a dream come true for myself and all the small indie devs featured on this volume. It means more than you’ll ever, ever know. 💖