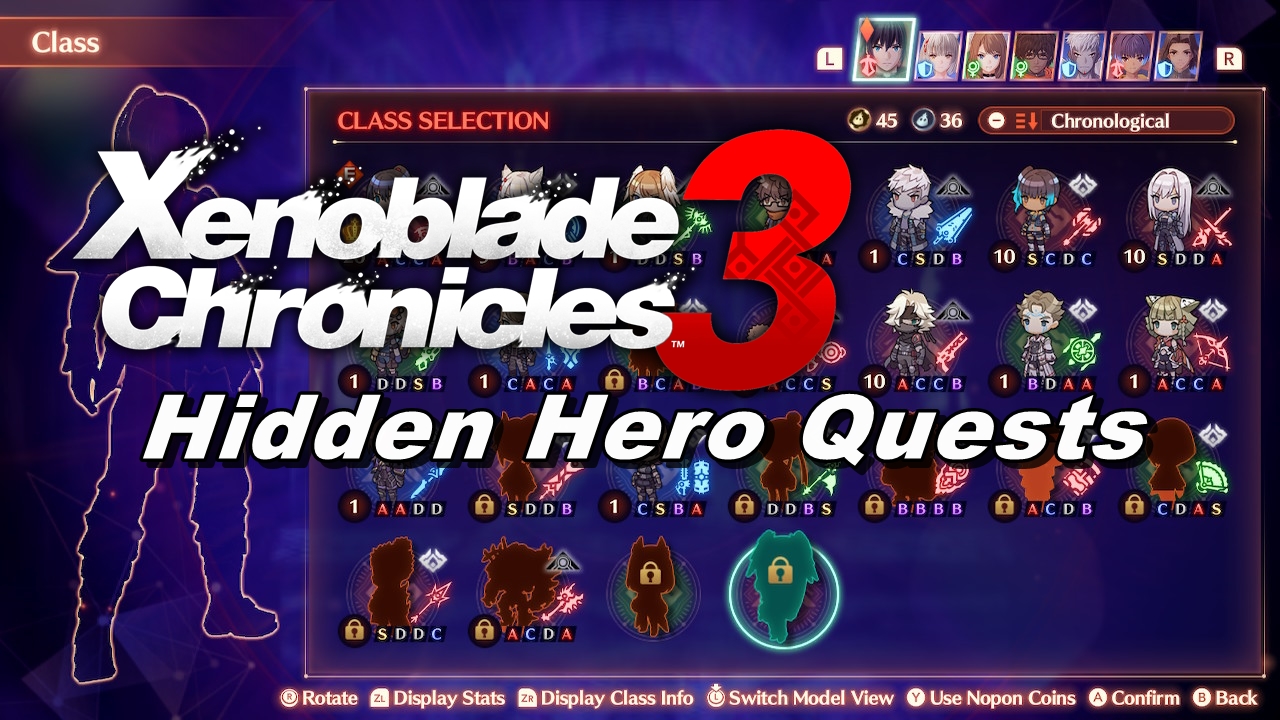 Want to know how to get your hands on the two hidden heroes and complete their Hidden Hero Quests in Xenoblade Chronicles 3? In this guide, we will tell you where you can find them and what their prerequisites are in order to do their Hero Quests. Please bear in mind that this guide falls deeply into spoiler territory and while it is considered “post-game” by some, you can actually acquire these heroes without beating the final boss. However, even if you have beaten the boss and watched the credits roll, if you save your game afterwards, it will still continue the save point from before you beat the final boss. This will allow you to skip travel out of there and get these “Hidden Heroes”

When you are ready, you can click on the “Read More” tag and venture into spoiler territory.

Hidden Hero Quests are exactly like your standard Hero Quests in that you can acquire powerful hero characters to join your party and learn their class sets. The hidden part is due to their silhouettes not being shown on the Class Menu until after beating the game. However, there seems to be a discrepancy on when you can actually take on these quests.

The two hidden heroes are the Kevesi Queen Melia and Agnian Queen Nia. I started searching for them after beating the game, but apparently, they can actually be acquired soon after Rescuing Queen Melia from inside Origin. These heroes are also slightly different to other heroes, not because of their regal status but because they don’t actually have a Hero Quest. All you have to do is go to the necessary Quest-related event spot and after a cut-scene, they will eagerly join you.

What they do have in common with the other hero characters is that they too have Ascension Quests which will push their class rank up to Lv 20, as well as further developing their character.

In order to get Nia to join your merry band of heroes, you must go to the Cloud Keep in Aetia Region, Upper. You can get there by using skip travel to the Hall of the Serene landmark. There should be a question mark icon on the map, which will tell you if the quest is available or not.

After you walk into the room, you will be greeted by a cut-scene of Queen Nia who will ask to join your party. This will unlock the Lifesage Class which is a powerful healer class and can be inherited by Mio.

Before you can begin Nia’s Ascension Quest, there are a couple of prerequisites that you will need to meet beforehand. You will need to visit four specific locations around Aionios. These are the Saffronia Tree Landmark in Fornis Region, Full, Memorial Hall Landmark in the City Interior, Tower Camp in the Pentalas Region, Full, and Ascension Grounds at Agnus Castle. These four locations will each have their own cut-scene with Nia who will talk to the party about things from her past. They will also unlock parts of the Nia’s Memories discussion topic that will eventually unlock her Ascension Quest. You also need to have a character (for example Mio) who has reached Rank 10 in the Lifesage class. You can use Nopon Coins (Silver) to help speed the process along and a total of 33 Nopon Coins (Silver) are needed in order to reach Rank 10 without grinding through battles.

As for Nia’s Ascension Quest itself, you simply have to visit a certain spot in The Cavity. If you have not been there before, it is the large space that has been left behind when The City moved to avoid being destroyed by the Annihilation Cannon. You can skip travel to the Dolgan Cliff Landmark, which will bring you close to The Cavity. From there, follow the Quest line (providing you have activated) and try to avoid fighting enemies in The Cavity. They are well over level 80 and there is even a unique monster at level 120. Once you reach the Quest marker, you will receive another cut-scene and after that, you will have completed the Ascension Quest.

To unlock Queen Melia, you must go Castle Keves. Skip travel to the Main Castle Gate landmark at Castle, 1st Floor and you will see the Question Mark icon. Go to it to activate a cutscene with Queen Melia. After the cutscene is over, Queen Melia will join your party. Her class is Royal Summoner (Attacker) and it can be inherited by Noah.

Queen Melia’s Ascension Quest – From Atop Her Throne

Queen Melia’s Ascension Quest, much like Queen Nia’s, has its own set of prerequisites before it can be accessed. It is said that all colonies must first be liberated. There is some discrepancy on this as it is not certain whether Colony 5, the Lost Colony, and Colony Sigma are included as they cannot be liberated. The other prerequisite is that you must have a member of your party (for example, Noah) who is Rank 10 in the Royal Summoner Class. Again, you can use Nopon Coin (Silver) to quickly level up should you have 33 of them to spare. Once you do, you can go to the Throne room on Castle, 4th Floor, (we used the Upper Water Supply Landmark to reach this area).

As you step into the Throne Room, you will automatically be greeted with a cutscene which will then activate Melia’s Ascension Quest – From Atop Her Throne. This quest is broken up into three standard quests and all of them need to be completed in order to finish the Ascension Quest.

The three standard quests are: Colony 9’s Backup, Friction With Agnus, and The City Pep Talk. Make sure your party is reasonably well-levelled (recommended Lv. 80) as there is some fighting that needs to be done in the Friction With Agnus quest. Go to each location and complete the quests in any order that works for you. When you are done, return to the Throne Room in Castle Keves and you will be rewarded with another cutscene and the completion of the Ascension Quest. This will unlock rank 20 of the Royal Summoner Class.

That is it for this guide. We do hope you have found our Hidden Hero Quests guide helpful and that you will continue to enjoy playing Xenoblade Chronicles 3, especially since Nia and Melia can fight by your side now. We are working on other Xenoblade Chronicles 3 guides so do be sure to come back often and check them out!