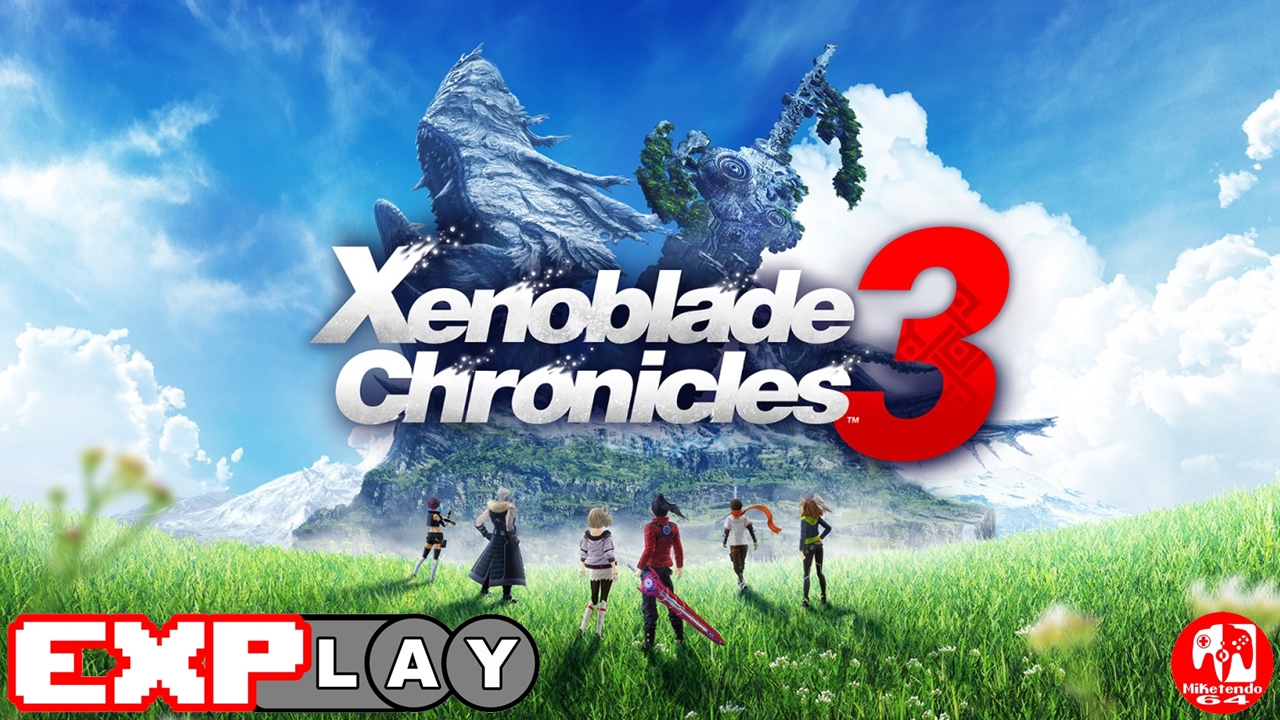 Welcome to EXPlay, (Explain & Play) the review series where we care not for scores but tell it how it is when it comes to every game we get our hands on, whilst also taking the time to include some lengthy gameplay, to give you the reader, the chance to shape your own impressions and views whilst watching and reading. In this installment, we’re covering Xenoblade Chronicles 3 by developer Monolithsoft.

Xenoblade Chronicles 3 takes place in the world of Aionios where two warring nations, Agnes and Keves are locked in an unending battle. The inhabitants of each nation can only live for 10 years, which is mostly spent fighting enemy forces in battle. The people who lose their lives during each conflict have their life force absorbed by the flame clocks on large mechanical behemoths called Ferronises. These flame clocks need to be well maintained with the essence of lives lost otherwise the people who are bound to them will perish before their natural lifetime is up.

During one such conflict, three soldiers from Keves and three from Agnus are forced to join each other thanks to a mysterious man who is much older than them. The party of six become enemies of their own nations and are forced to travel to a city called Swordmarch, which may be the last safe haven for them. With nowhere else to go, the six begin their journey and discover that there are darker forces at play who may be behind the constant conflict between Keves and Agnes.

Like the other entries in the series, Xenoblade Chronicles 3 is an RPG that has an incredibly expansive world to explore, giant monsters to battle and a deep and rich story with plenty of character development. You control a party of six characters; Noah, Mio, Lanz, Sena, Eunie, and Taion. While you may only control one character at any one time, you can change between characters freely whilst exploring or in combat.

Unlike in previous entries where you could only use a party of three in battle, in this game you can have all six party members fighting together. Each character fights with auto attacks and has a range of arts that can add buffs to party members and debuffs/status effects to enemies. Some can even deal extra damage depending on your positioning towards the enemy. These arts have a cooldown and will need to recharge after use. Kevesi arts take time to recharge while Agnian arts recharge partially upon every auto attack.

The types of arts that each character can use depends on the Roles and Classes they pertain to. Noah’s default Class for example is a Swordfighter and his role is attacker. He doesn’t have high HP but he can dish some damage with offensive attacks. Mio’s default Class is Zephyr and has a defensive role. She has higher HP and gets enemies’ attention by gaining aggro. Whilst taking hits, the enemy will focus their attention on Mio, allowing Noah to chip away at their HP. The third role is Healer and this is Eunie’s default role. Her class is Medic Gunner and she is tasked with keeping the other members of the party on their feet and in good health. Should any party members fall in battle, Eunie can get them back on their feet again.

Although the standard practice is to have two of each role on the team (attackers, defenders, and healers), you will be able to change your characters’ classes and roles later on in the game which can open up a whole range of possibilities. If you want a whole party full of attackers or healers, you can. It might not be the most recommended method of playing when it comes to combat but you do have the options should you choose it. As for classes, your characters will be able to take on the classes of other party members and learn some of their arts. Later on in the game, you will be able to enlist the help of Hero characters who will join you in battle. You cannot control them but by fighting alongside them, you will be able to unlock their class for your party members, allowing you to learn their skills for yourself.

While auto-attacks and arts make up the general combat mechanic, there are also other fighting mechanics at your disposal like Combos, chain attacks and Ouroboros attacks (this mechanic interlinks two of your characters into one being for a limited time and do massive damage). These get implemented into the game gradually as you play so don’t worry about getting too overwhelmed with all these mechanics. You will learn them as you go and all tutorials that appear in-game can be found in the System Menu under “tips”. If you need some extra practice with any of the game’s mechanics, you can take part in Training Drills which is also on the System Menu.

Combat may be one of the core mechanics of Xenoblade Chronicle 3 but it isn’t the only one. Exploration is also a very big part of it and the world of Aionios has so much to offer players. It has vast regions of different environments like open greenlands, dank caves, lush waterfalls and dusty wastelands. The main quest will have you going through many of these regions during your adventure and will take around 80 hours or so from start to finish. However, it is very easy to just lose yourself in exploration and with plenty of collectable items around that can be used for all sorts of things and side quests from NPC’s to get caught up in, your playtime will be well over 120+ hours.

As someone who came into the Xenoblade Chronicles series quite late, the games can be a little daunting to dive right into them. These are not games that can be beaten in a couple of hours or days. They require time and commitment but they will deliver an experience that is quite unlike any other (except maybe another Xenoblade game, perhaps).

Xenoblade Chronicles 3 is truly a remarkable game and is well deserving of all the praise it has received from critics and players alike. Having played through both Xenoblade Chronicles: Definitive Edition and Xenoblade Chronicles 2 as well as both of their expansion content (Torna – The Golden Country and Future Connected) earlier this year, I was more than willing to jump into the third entry with both feet because I knew I would not be disappointed. Although experience of the previous entries is not necessary in order to enjoy Xenoblade Chronicles 3, I find that it does help players appreciate the game and its characters all the more. They will also find multiple references to the first two games and how the story of all three games come together.

Even though Xenoblade Chronicles 2 has a special place in my heart, Xenoblade Chronicles 3 is an incredible follow-up with a rich story, loveable characters and combat that feels so much more refined and really opens up a lot of possibilities. If you haven’t played any of the other games in the series, you should definitely make a start and play this one!