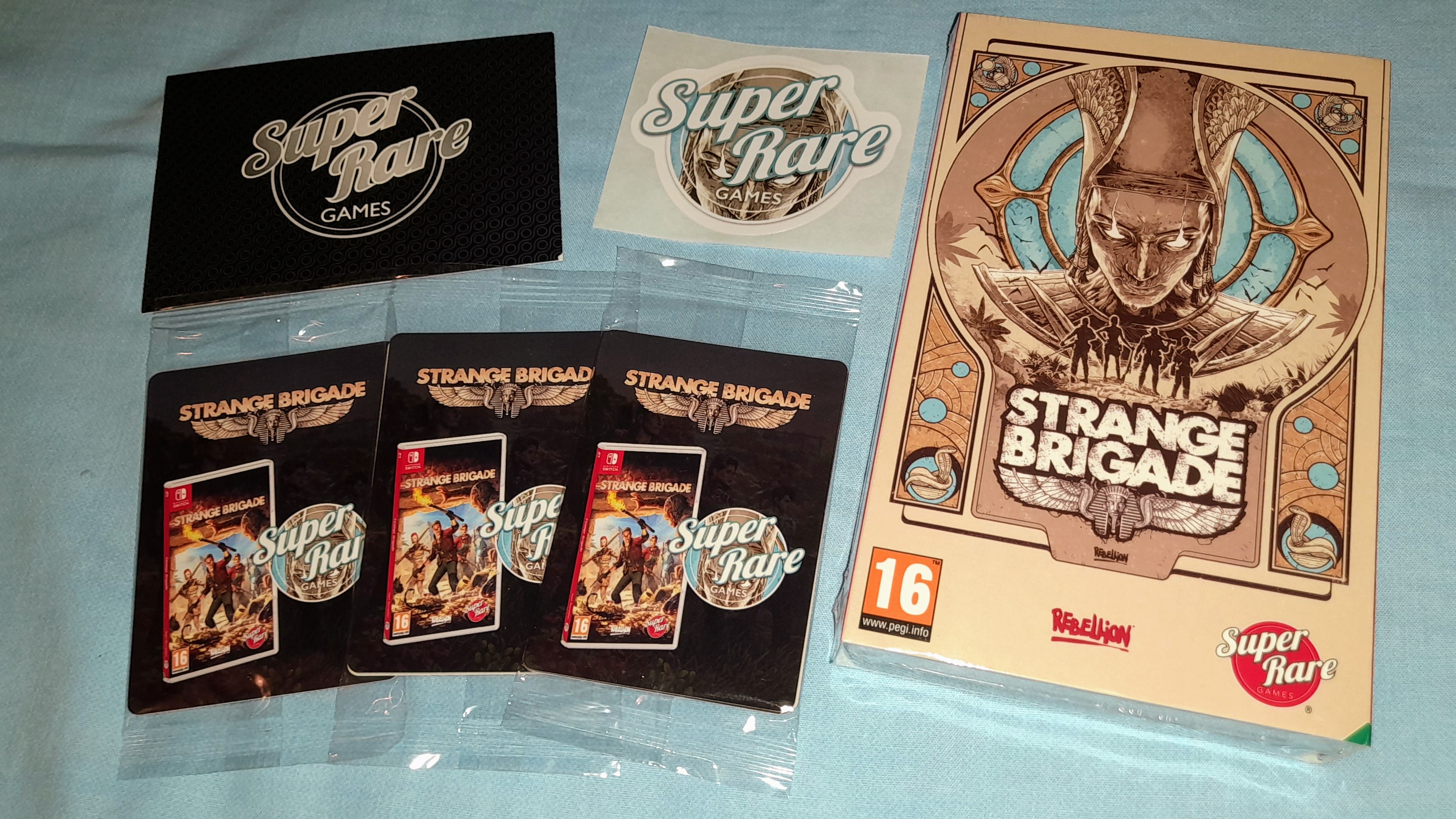 The campy, 3rd-person shooter Strange Brigade by Rebellion was released on Nintendo Switch back in June 2021. It was only released digitally via the eShop then but now, thanks to Super Rare Games, you can now purchase the game physically while stock lasts. As a fan of other Rebellion games like Sniper Elite and Zombie Army, I knew I had to add Strange Brigade to my collection as well, and the fact that it is themed on Ancient Egyptian mythology and the supernatural just made the decision even easier.

Super Rare Games has two editions available of Strange Brigade; a Standard Edition and a Steelbook Edition. Naturally, I went for the Steelbook edition as the Steelbook itself is seriously sweet to look at. It also came with a pack of three trading cards that are part of a set of five. I picked up a couple of extra packs separately so I would have a better chance of getting the full set. Fortunately, I did end up getting a full set and have a few spares as well. If you would like to see the contents of the Steelbook Edition of Strange Brigade in video format, I have recorded an unboxing video, which you can check out for yourselves in the embedded video below. If you would like to see close up pics instead, do scroll past the video.

Seeing as I have promised you close-up pictures of the Steelbook Edition of Strange Brigade, it is time for me to deliver. As for the contents, the Steelbook edition comes with a cardboard cover sleeve, a standard copy of the game, a steelbook, a postcard, a Super Rare Games Sticker, and a pack of three cards that I mentioned before.

So, what do you think of the Strange Brigade Steelbook Edition by Super Rare Games? Does it seem like something you may want to pick up for yourself? Perhaps you require a little more convincing? Well, we do have a general synopsis for the game as well as some of the game’s main features listed below should you wish to learn more about the game. Just don’t take too long in case there are no more copies left when you do decide to pick up the game physically.

Set: Egypt, the 1930s. You are one of the Strange Brigade, a daring group of heroes and explorers about to set off on a journey. Erased from ancient history and buried in a nameless tomb for 4,000 years, Seteki the Witch Queen has risen once again, and only you and your friends stand a chance against her and her army of mummified monstrosities. Bring out your inner adventurer in this thrilling third-person action shooter, playable both solo and in 2-4 player online and local wireless co-op!

🧟 FOUR FEARLESS FORTUNE HUNTERS – Travel the ancient world as one of four dashing agents trained to tackle the supernatural. Unleash devastating magical powers and unload powerful prototype weapons such as the fire-spitting Krakatoa, the ice-cold Chill Burster, and the brain-busting Blunderbuss!

⚱️ A LEGION OF MALEVOLENT MONSTERS – Seteki is not the only mythological menace to have awoken … she’s brought an army of loyal beasts with her! Face her many nefarious ne’er-do-wells, including moaning mummies, fire-breathing assassins, armour-plated minotaurs, giant scorpions, and much, much worse!

🔺TONS OF TERRIFYING TRAPS – Decapitate the undead with spinning blades, fry them to a crisp with fire traps, crush them with a well-placed boulder, and more. You wouldn’t set them on your teammates… would you?

🧭 OODLES OF PUZZLING PREDICAMENTS – Keep those peepers peeled for suspicious clues, secret entrances, and ancient contraptions that need re-awakening! Who knows what alluring treasures and buried riches await you on the other side…