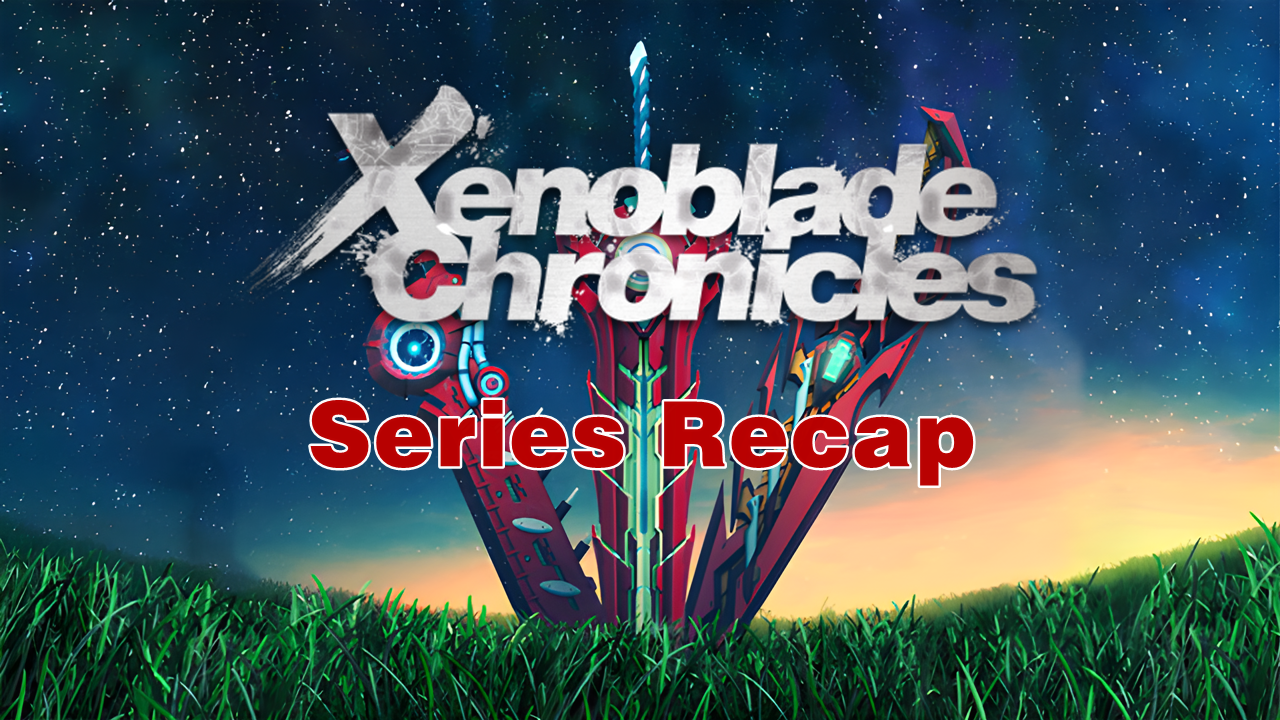 Without further ado, we present you with our Xenoblade Chronicles Series Recap. We have tried to keep it relatively spoiler free so there are no end-game story spoilers here. We do talk about certain characters but do not talk too much about their character arcs and developments so as to keep spoilers to an absolute minimum.

This is the first entry in the Xenoblade Chronicles series, which first released on the Nintendo Wii and later on the New Nintendo 3DS. Set in a vast and lush world of the Bionis, the game follows Shulk, his friend Reyn and the companions they make on the way as they try to stop mechanical killing machines called Mechon from ravaging their homes and killing their friends.

Shulk wields a powerful sword known as the Monado, which allows Shulk to see into the near future. With this ability, Shulk can keep his friends safe and foresee incoming attacks in battle and glimpse events that have not yet come to pass. As he and his friends venture across the Bionis, they eventually learn the harrowing truth of their existence and why they are being attacked in the first place.

This is not a standalone game but rather an “Extra Story” expansion that is coupled with Xenoblade Chronicles: Definitive Edition. It is set several months after Xenoblade Chronicles and follows Shulk and Melia as they venture of the Bionis’ Shoulder which was never explored in the main game.

Whilst flying around the Bionis’ Shoulder, Shulk and Melia’s vessel is hit by a projectile that causes them to crash land into a lake. After recovering from the crash relatively unscathed, the two set off to investigate why they were shot down and what had come of Melia’s people, the High Entia, who had taken refuge in the area.

Xenoblade Chronicles takes place in the world of Alrest, which rests upon a vast sea of clouds. In this world, the inhabitants reside on the backs of giant titans that wade/fly over the cloud sea. One such inhabitant is Rex, a scavenger who is contracted by a group of enigmatic characters to find something precious and very powerful that has been lost over time. Rex helps the group find what they were looking for but is double crossed by them and left for dead.

He hears a voice call out to him, a voice belonging to that of a woman called Pyra. However, Pyra is no mere woman but a living weapon known as a blade. Pyra asks for Rex’s help in seeking a once though mythical place called Elysium. In return, she would grant Rex part of her life force and permit him to be her driver. In Alrest, Drivers and Blades live alongside one another with Blades assisting Drivers by lending them their power, be it through arduous tasks or fighting in battle.

As Rex and Pyra seek out Elysium they are joined on their adventure by a colourful cast of characters like the Gormotti Nia and her blade Dromach, and the Nopon Tora and his artificial blade Poppi. Together, they will overcome great obstacles and fight against Malos and the other nefarious forces at play.

Xenoblade Chronicles 2: Torna ~ The Golden Country is an Expansion for Xenoblade Chronicles 2. It is available as a digital download from the Nintendo Switch eShop and for a short period of time, it also had a physical release. This title takes place 500 years before the events of the main game and takes place during the tragedy that befell Torna.

During this story, we follow Lora, Jin, and Haze who accompany the legendary hero Addam and the Aegis Mythra on their mission to stop the malevolent Malos. Their journey will take them across the titans of Gormott and Torna and dive deeper into backgrounds and the motives of such characters as Jin and Mikhail, and why they take the path they do in Xenoblade Chronicles 2.