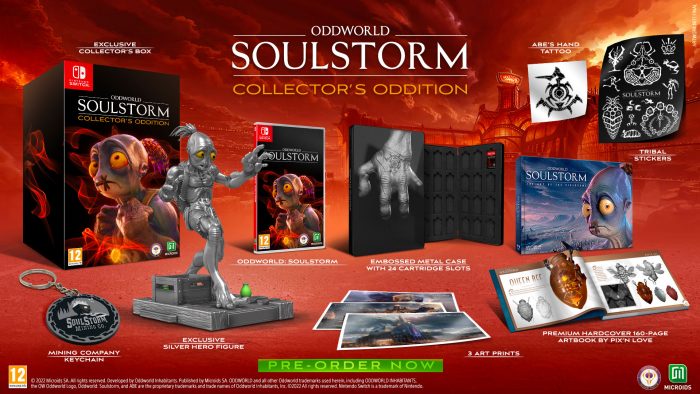 After news was floating around that Oddworld: Soulstorm was rated for Nintendo Switch, Microids and Oddworld Inhabitants has officially announced that the game will indeed be getting a physical release on the console. The game is dubbed as the Oddtimized Editionamd that there will be both a limited and collector’s “oddition” that will be available to pre-order from select retailers like Amazon, GAME, and Gamestop.

The Limited Oddition of Oddworld: Soulstorm features the game in a collectible metal case (not in a standard Switch case) and three art prints. As for the Collector’s Oddition, it consists of the following items:

About Oddworld: Soulstorm for Nintendo Switch

Oddworld: Soulstorm, the award-winning sequel to the best-selling Oddworld: New ‘n’ Tasty, is an explosive action-adventure epic platformer. Optimized for Nintendo Switch to take advantage of the platform’s unique features, this version features the same amazing Soulstorm gameplay currently found on the other platforms (PlayStation, Xbox, Steam, and Epic Games Store), with a delightful Switch flavor!

In Soulstorm, you must help Abe on his hero’s journey to free more than 1,000 Mudokons from the oppressive chains that enslave them.  Confronting an uncertain future and a forgotten past, use your instincts and skills to allude detection, survive insurmountable odds, and maybe provide a spark that sets a revolution ablaze.

Armed with an array of tactics, from stealth to going full on ballistic by utilizing scavenged trash to craft powerful and incendiary weapons, decide how best to bring the fight to your oppressors and save all the Mudokons.

Can you save them all?

Explosive Action-Adventure Platformer: Evolving the platforming genre by adding RPG-lite elements with player agency to play as you like, whether aggressively or passively. Pickpocket enemies, loot lockers, sift through trash cans, and find hidden areas to acquire resources. Exchange resources at vending machines to get products that give you more agency in how you chose to conquer the game’s many challenges. Craft tools and weapons to use against opposing forces or arm your followers and watch the revolution ignite.  Epic Scope: Soulstorm is a 2.9D action-adventure platformer with 15 hours of gameplay, and dozens more for achievement hunters and perfectionists. Epic environments with massive scale to explore by going into the world.   Revolutionary: A dark storyline with a twisted sense of humor that shines a light on the ironies that exist in the human condition. A cog in the corporate machine, used for meat and muscle, Abe will attempt to save them all and maybe ignite a revolution.   Completionists: Can you save every single Mudokon in the game? Can you achieve the best ending and unlock the final two playable levels? Can you scavenge every trash can and locker, kill or safely apprehend every antagonist, find every hidden area, collect every jelly? More than 3 million players have had the opportunity to do it…will you be the first on Nintendo Switch to succeed?  Multiple Endings: Soulstorm has 15 levels, with two additional unlockable levels at the end of the game and four potential endings, each depending on your Quarma. At the end of each individual level, you receive a Quarma score, based on the number of Mudokons you save.  If you succeed in saving enough Mudokons throughout all the levels, you’ll get one of the good endings. But beware: if your Quarma score isn’t high enough, you’ll get a more… dire fate! Don’t worry though, as you can always go back to any level and try to improve your Quarma to unlock the best ending.