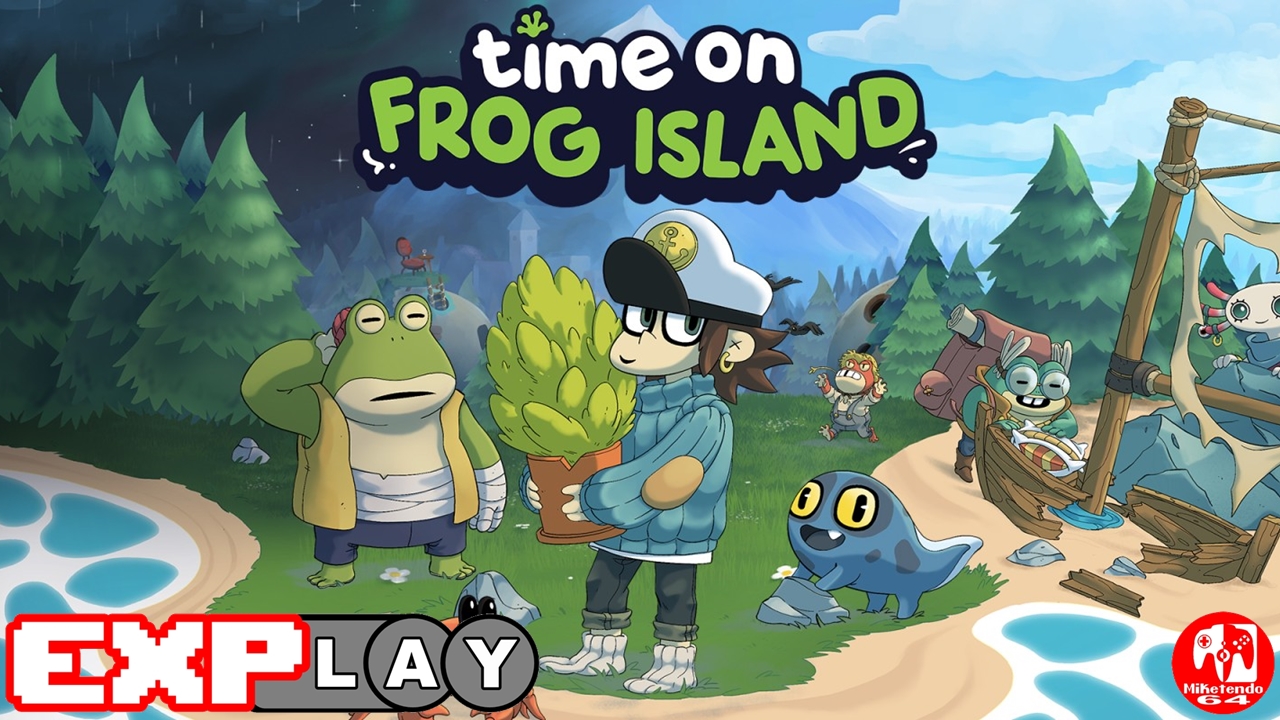 Welcome to EXPlay, (Explain & Play) the review series where we care not for scores but tell it how it is when it comes to every game we get our hands on, whilst also taking the time to include some lengthy gameplay, to give you the reader, the chance to shape your own impressions and views whilst watching and reading. In this installment, we’re covering Golden Force by developer Half Past Yellow.

Time On Frog Island: (The Explanation)

I’ve been following the development process for Time on Frog Island for some time now. I played the demo a few weeks ago and sort of knew what to expect when the game finally releases this month for Nintendo Switch and various other platforms. Initially the game is a fetch quest of sorts which plays out with you bringing items to residents on Frog Island which leads to more quests opening up and more exploration.

In Time on Frog Island, you play as the captain of a ship seemingly journeying across the oceans to fulfill the dying wish of your partner. After being tossed around at sea, you crash your ship on Frog Island and now you must repair your ship’s wheel, rudder, sail, and more in order to get your vessel back in shipshape.

On your journey you have a plant companion that you will find represents your partner whom you learn about through vignettes shown each night when you sleep and save the game. The story is all done through artwork, and the series of images are touching as you see the partnership and plan to sail thwarted by their passing. In many ways the story parallels that of Carl and Ellie from the movie “Up”.

Time on Frog Island plays a bit like a Pixar movie where the dialogue is all done through grunts and emotes. Sometimes the characters you meet will ‘speak’ in a single image of happy or sad-faced frogs showing the item they are looking for next in the fetch quest puzzle. The items you may need are found through the island, from coins, a blowfish, mushrooms, a bell, and more.

The large-ish nature of the island, and a secondary island which you unlock through a series of puzzles with the resident carpenter frog, can take a bit of searching to find exactly what you need. Puzzles along your quest to repair your boat are not difficult, though some are only activated by finding items in certain places on Frog Island or during rainy or sunny days.

You move the captain with your left analog stick, and have a jump and interact button. You can hold down the jump button to hop further, which can be useful especially when scaling the mountain or wide gaps. You can pick up items and throw or drop them quite easily as well, which I did sometimes so I could run a bit faster while not having to hold the item.

You can only hold one item at a time as you move around the island which helps you focus on the current mission at hand. Sometimes I found myself getting sidetracked when I saw a new area of the island to explore or wanted to talk to another resident about their quest needs.

Time on Frog Island felt similar to ‘A Short Hike’ which has you flying and jumping around an island helping residents so you can earn a feather to be able to fly further to the top. The similarities end there though, as Time on Frog Island has a fixed camera angle and an art style closer to The Legend of Zelda: Link’s Awakening remake with a painterly texture.

I was able to complete Time on Frog Island in around four hours. My complete walkthrough is uploaded, starting with Part 1 here. While the game is on the short side, I would recommend picking it up if you are a fan of non-violent and very chill games. Getting tackled by a bird and accidentally jumping off a cliff, are some of the few ways that I ‘died’ in Time on Frog Island. When you do die you just wake up without the item you were holding on the beach near your ship. There are achievements to unlock which help to get you to explore the far reaches of the various locations and trying various interactions along the way. I’d recommend giving Time on Frog Island a go, and if this was a full review with a score and not an EXPlay, Time on Frog Island is an 8/10 for me.

Time On Frog Island: (The Gameplay)