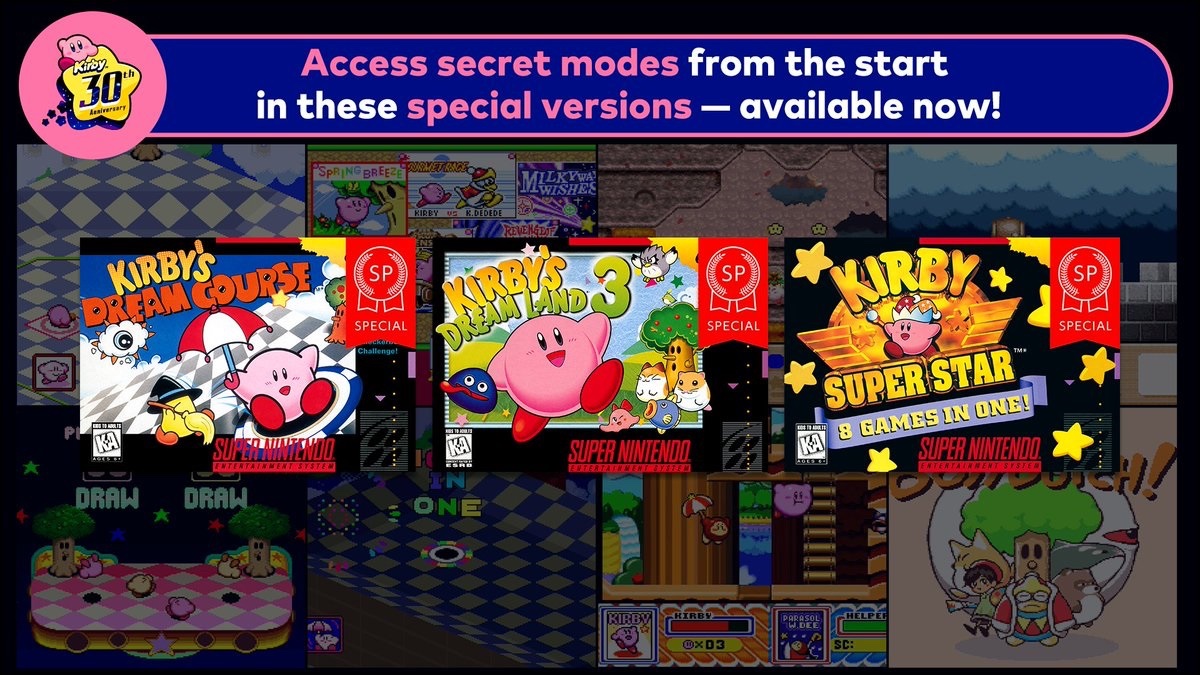 Thanks to a new version 3.3.0 update that has rolled out for Nintendo Switch Online’s SNES application, three new SP versions of classic Kirby games have been released and we have all the details here:

Think you can copy Kirby’s moves?  In this special version of Kirby’s Dream Course, all the secret modes have been unlocked!

With everything opened up, you have a few different options available you can choose from that aren’t available otherwise.

These new options include PLAY EXTRA COURSE (both under 1PLAY GAME and under 2PLAY GAME), NORMAL COURSE and EXTRA COURSE (under MAP SELECT), and even the DANCE SELECT option inside the SOUND ROOM. It’s time to dance!

You can play Milky Way Wishes, and the Arena too!

In this special version of Kirby Super Star, the secret modes are all unlocked! Revenge of Meta Knight, Milky Way Wishes, and the Arena are all available–plus there’s the Sound Room menu, a staple of the Kirby series.

In Milky Way Wishes, you can’t copy abilities from enemies like you normally would, but you can collect abilities by using the Deluxe Copy Ability. Then you can use an ability you’ve collected as much as you want, so there’s no need to hold back!

Glide along, smoothly and easily!

In this special version of Kirby’s Dream Land 3, all secret modes are unlocked.

When the original version was released in Japan in 1998, the Japanese website read, “Games these days are difficult. Wouldn’t you like to glide along smoothly and easily? The wait is over, because Kirby is back, and he’s ready to play with anyone and everyone!”

Kirby and his friends are on a mission to save PopStar, but in this special version, Kirby’s already glided in to save PopStar and has easily achieved a 100% completion rate. All of the stages are available, but that’s not all.

You can also listen to all the songs from the game in Sound Room under OPTION, or you can play Super NES MG5 (in which you play the five mini-games in a row, one after another), Jumping, and Boss Butch!

With everything cleared, you can even view all of the event scenes and each of the three endings.