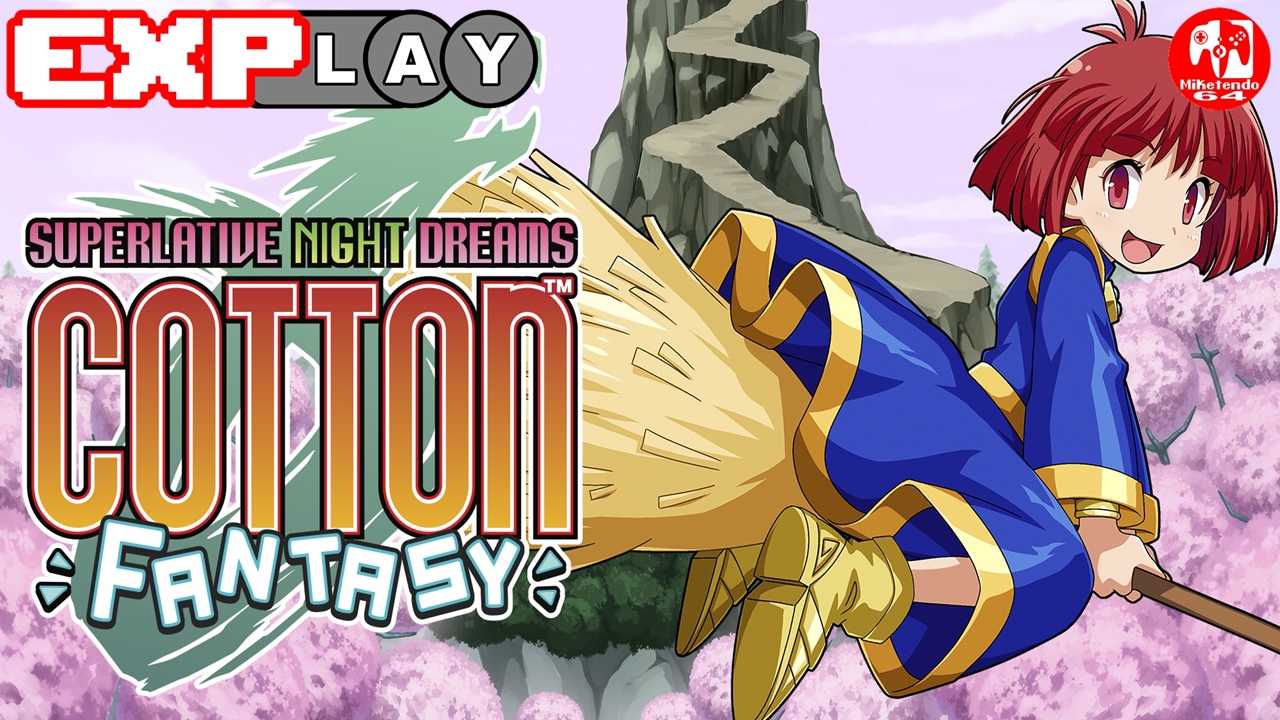 Welcome to EXPlay, (Explain & Play) the review series where we care not for scores but tell it how it is when it comes to every game we get our hands on, whilst also taking the time to include some lengthy gameplay, to give you the reader, the chance to shape your own impressions and views whilst watching and reading. In this installment, we’re covering Cotton Fantasy: Superlative Night Dreams by developer Success.

Cotton Fantasy: Superlative Night Dreams is a 2DHD bullet hell “Cute ’em Up” (as opposed to Shoot ’em Up) game featuring cutesy characters and colorful environments. It is the tenth entry in the Cotton series that was first launched back in 1991.

The story takes place in a fantasy kingdom and follows a young witch called Nata de Cotton. One day, the kingdom discovers the disappearance of its special candy, Willows. A fairy called Silk is tasked by the queen of the kingdom to enlist the help of an old friend and find the Willows. The old friend is a young witch named Nata de Cotton who at first, is not interested in helping until Silk tells her about the missing Willows that just so happen to be Cotton’s all-time favourite candy. Cotton then grabs her broomstick and sets off to find the missing sweets.

In typical shoot ’em up fashion, Cotton Fantasy has players fly around the screen and blast at anything that comes in their way. You must avoid enemy projectiles at all costs as a single contact will cost you a life. If all lives are lost, you will be asked whether you wish to continue or not. Deciding not to continue will register your high score as it is on the leaderboard. Choosing to continue, however, will allow you to play on with a new set of lives but your score is set back to zero.

There are seven different characters that you can play as in Cotton Fantasy including the titular character. Most of the characters are available at the start but the seventh character only becomes playable upon beating the game once. Although the controls for each character are the same (Y to shoot/charge shots, B for Special, A for auto fire), they do have differing abilities and techniques. For example, while most characters operate on a life system, there are two that operate on a timer. For these characters, they must collect crystals in order to keep the timer going. If it falls to zero, they will be forced to abandon the game or return with their score reset. They also start off with about 600 seconds on the clock, which doesn’t sound too bad but if they get hit by an enemy, they will lose precious time that can be very difficult to recuperate.

There are multiple stages in Cotton Fantasy and upon beating the prologue stage, you can tackle the other stages in any order you wish. You have to play through five stages of your own choosing, a bonus stage, and then two mandatory stages to reach the final boss but when there are only about eight stages initially (until you unlock more), it doesn’t take a very long time from starting the game to rolling the credits. As for the stages themselves, they are all littered with enemies a plenty and at the end of each stage there is a boss. Most enemies can be dispatched after being hit with a few shots but bosses have a health bar that you will need to reduce down to zero in order to defeat them.

Even though the main campaign of Cotton Fantasy is relatively short, it does amplify its content by being able to play with different characters and their specific styles, the training mode lets you play through any stage singularly and extra stages can be unlocked as well. The three difficulty modes also help by offering different levels of challenge but I am more than happy with the Normal mode as I do not have the prowess or the patience to play on any of the harder difficulties.

Cotton Fantasy: Superlative Night Dreams is most definitely an interesting take on the typical shoot ’em up genre. The cute art design and the colorful environments are nice to look at and you would think that the game would be a walk in the park to play but looks can be deceiving. Even on the lowest difficulty, I struggled to accomplish a single run without having to continue. I do like my games to be somewhat a little forgiving where being hit means taking damage and not losing a life instantly. Still, the ability to keep going at the cost of an incredible high score means that you will at least make it to the end of the game rather than never making it past the first level.

If you like bullet hell shoot ’em ups that are cute and vibrant then Cotton Fantasy is one to look out for. The price tag is a little on the steep side but the replayability is there with unlockable content and characters for those willing to invest time into the game.