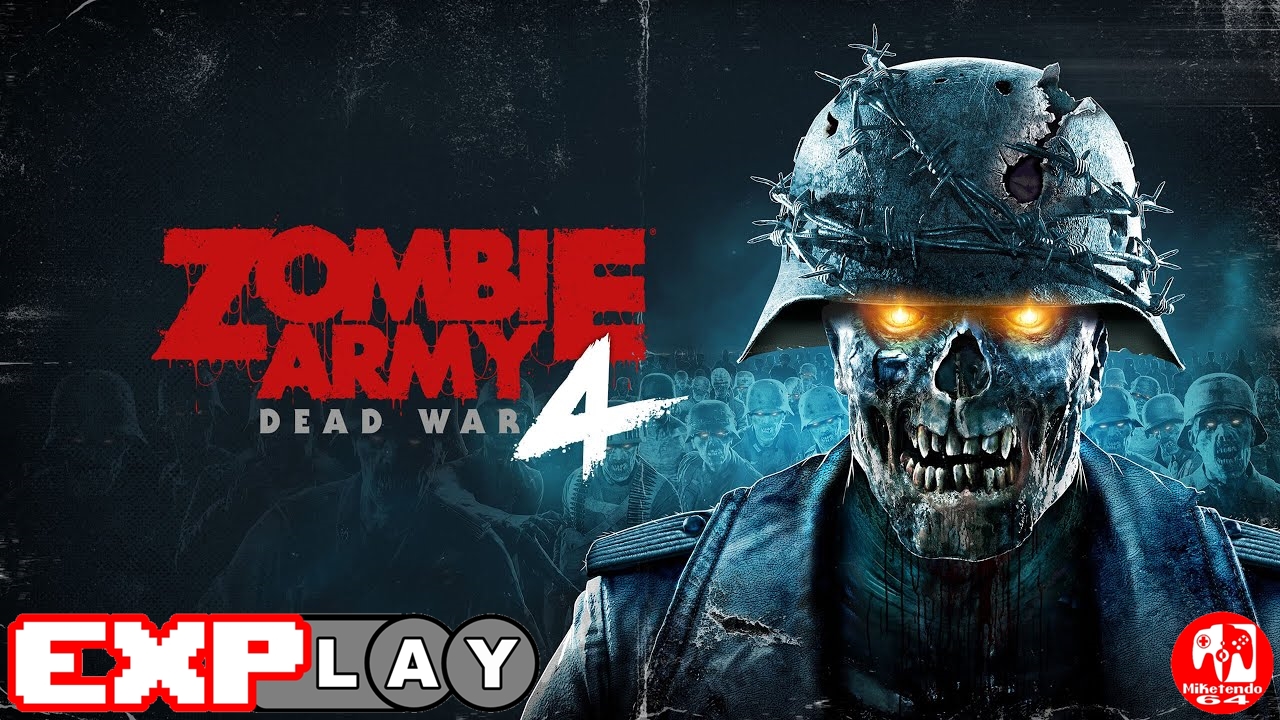 Welcome to EXPlay, (Explain & Play) the review series where we care not for scores but tell it how it is when it comes to every game we get our hands on, whilst also taking the time to include some lengthy gameplay, to give you the reader, the chance to shape your own impressions and views whilst watching and reading. In this installment, we’re covering Zombie Army 4: Dead War by developer Rebellion.

The Zombie Army series started as an expansion to the Sniper Elite games. They were later packaged together as the standalone game Zombie Army Trilogy. Zombie Army 4: Dead War is the fourth instalment and is the first in the subseries to not be part of an expansion and is a full game of its own. The game released back in 2020 on PlayStation 4, Xbox One, and Windows, and now it is finally available to play on Nintendo Switch over two years later.

Zombie Army 4: Dead War takes place in an alternate reality during World War 2 and is set one year after the events in Zombie Army Trilogy. The Resistance have fought back against Hitler’s hordes of the undead and have sent him straight to hell. Although the undead Nazi hordes were left leaderless, their immense numbers still managed to overwhelm Europe and drove the Resistance Army back to areas like Italy, Croatia and France.

In Italy, the Resistance Army discover evidence of cultists performing satanic rituals in an attempt to maintain cohesion and control of the undead. As a member of the resistance, it is up to you to expose the cult and put a stop to their evil deeds. You will travel through the apocalyptic sights of Italy and Croatia, and venture into the very bowels of Hell itself and end the Dead War once and for all.

As anyone who may have played the previous entries may know, Zombie Army 4: Dead War is a third-person shooter that has you survive hordes of reanimated Nazi corpses as you try to complete objectives. These objectives can range from simply moving from point A to point B, fetching a number amenities like fuel, bomb components, or reset fuse switches whilst surviving zombie hordes. The mission ends when you are safe inside the safe house at the end of the level.

To help you on your missions, you are armed with a selection of three weapons: a rifle for long distance shooting, a mid-range firearm like a Trench Gun or SMG, and a pistol. From the very start of the game, you can choose your preferred loadout but if ever you get tired of it, you can always change it out at a Safe House workbench to find a combination that works better for you.

Speaking of the workbench, you can also use it to upgrade your weapons with any upgrade kits you find in the field. These upgrades can add mods to your weapons to increase damage output or magazine capacity, and even charged shots with adverse effects like explosive shot or incendiary shot after so many rounds fired. Another thing you can do at the workbench is the ability to change your character. The game chooses a woman named Jun as the default protagonist for Zombie Army 4: Dead War but you can opt for another character including Karl Fairburne of the Sniper Elite series and the previous Zombie Army games.

Zombie Army 4: Dead War can be played alone or with up to four players online. There are two games modes to choose from: Campaign and Horde. The Campaign mode will have you play through the game’s story whereas Horde mode will have you fight waves upon waves of enemies that will get stronger and more aggressive each time. Both of these modes can be played singularly offline or online. When opting to play online, you can choose which mission you would like to play, if you want to host a private or open session and how many enemies you would like to be spawned in the game. You can also choose the difficulty level from Easy to Hard (with more “harder” difficulties to be unlocked later). As well as hosting your own game, you can also join games hosted by others or simply jump into a Quick Match.

Now I have spoken at length about the game but not really mentioned the zombies themselves. In Zombie Army 4: Dead War, most zombies are your typical slow moving, hobbling types that are only really a problem if you let them overwhelm you. Then there are your suiciders that have explosives attached to them, there are heavy gunners who, as the name suggests, carry heavy weapons like machine guns or flamethrowers. Other enemies include grenadiers, iron giants, and necromancers. That isn’t all though as there are several other types of enemies to keep you on your toes but the most notable of all are Hell Tanks and Hell Planes that have been manufactured in factories in hell itself!

While the other versions of Zombie Army 4: Dead War have been out for a good while already, the Switch version comes with the Season Pass 1 already included with the base game and includes extra missions, characters, weapons, and skins. Season Pass 2 and 3 are readily available to purchase and download from the Nintendo Switch eShop. All the content in both passes can be purchased separately but it will certainly cost you a pretty penny and is worth buying them in the pass.

I have enjoyed playing Zombie Army Trilogy on Switch and have been hoping that Dead War would come to Switch as well. How Rebellion managed to get this game working on Switch is nothing short of optimization wizardry. Yes, there have been changes made here and there to get it running on the console and the FPS is a solid 30 as opposed to 60 on other systems but when actually playing the game, none of that really matters. The iconic X-Ray Kill cam is back and is as morbidly satisfying as ever and some of the zombie enemies are truly terrifying up close. Sure, the whole idea is a little absurd but don’t let the “B-Movie” vibes put you off. This game is one of the best zombie slaying games on Switch and is well worth your time if you like blasting limbs off of zombies, just for them to resurrect so you can do it all again. Oh, and did I mention there are zombie sharks in this game? Well, yes. Yes, there are.