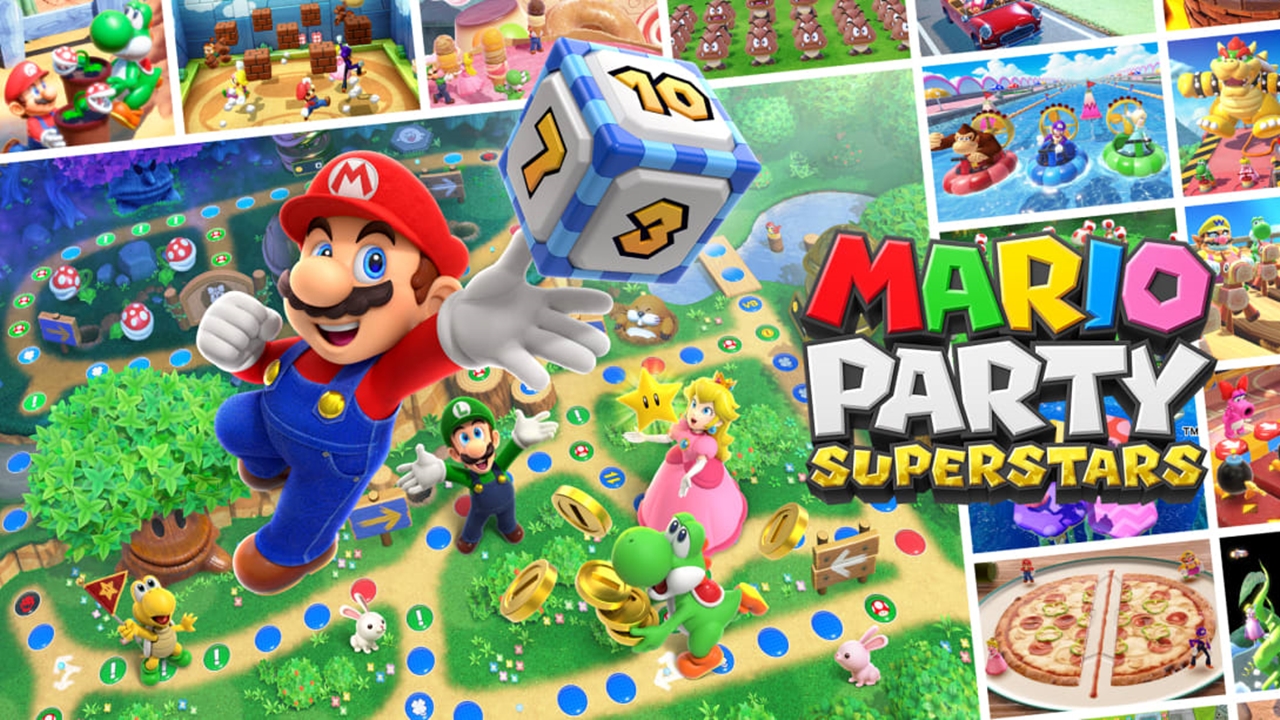 Like with most Mario Party games, winning a game in Mario Party Superstars and becoming a Superstar seems to rely solely on luck. You can play honestly and score enough coins to buy your own stars or you can “cheat and scheme” by stealing coins and stars from other players. However, in the end the game can turn everything on its head by granting a struggling player enough bonus stars to take the lead themselves. Be that as it may, you can still gain the upper hand by using items effectively. Items like the Dash Mushroom will add 5 spaces to your dice roll, a Boo Bell will summon a Boo who can steal coins or stars from another player and the Golden Pipe will place you right next to a star.

Thanks to the unpredictability of Mario Party Superstars, it makes for a perfect Super Mario birthday idea for your kids or friends who are into video games. Even players who are not pro gamers still have just as much chance of winning, especially if they know what items to look out for and when to use them. In this guide, we will list some of the items in Mario Party Superstars and what they are used for.

For those who are not familiar with how to play Mario Party Superstars, players compete against each other in a board game scenario. Everyone takes turns to move across the board and when everyone has had a turn, they will be able to partake in a minigame to earn coins. These coins can be used to purchase stars from Toadette who will set up shop on a space on the board and will move to another space after someone has bought her star. At the end of the game, whoever has the most stars wins. During turns, players can use items that they have either purchased from Toad at the item shop or have picked up by landing on the item space. Items are single use and will be discarded upon use.

Without further ado, on with the guide!

Mario Party Superstars is no exception to the rule that everyone enjoys a surprise bag. Thirty coins can get you an Item Bag at select item stands in-game. The Item bag will reward the player with up to three items (providing the player has no items in their inventory) that could literally be any other item in the game with the exception of another item bag.

The item bag works best if your inventory is empty so you can get the most out of it. If you only have one available space, the item bag would be a waste, especially if it only gives you a cursed dice block.

Hidden blocks are a staple in Mario games and usually come with some kind of goodie inside, be it loads of coins, a 1-up mushroom or a super star. Mario Party Superstars is no exception and has its own Hidden Blocks stashed away somewhere on each board at random. The Hidden Block Card is an item that grants the player its very own hidden block. When players hit the block, they will stop a roulette wheel of sorts and can earn either coins (most common) or a star (rare).

More often than not, you will find Hidden Block Cards via Item Spaces. They are worth giving a go if you can obtain them as they give you an opportunity to net yourself a star.

The Double Star Card is a literally game changer.  If you are lucky enough to obtain this item (which can’t be purchased from Toad’s Item Shop), you can net yourself two stars the next time you visit Toadette. Be sure to have plenty of coins at hand (40 to be precise) as you don’t want this card to activate and not have enough funds to take home both stars.

These dice will allow you to roll an extra die or dice so you can move even more spaces round the board. With each dice capable of reaching 10, the triple dice can grant you a whopping 30 spaces to move. As a bonus, if you roll the same number on each dice, you will earn some extra coins!

The Custom Dice Block is another player’s favorite item. It allows players to select the exact number of spaces they wish to move from 1-10. It is particularly handy for those that need to move a precise number of spaces or for getting as high a number as possible to skip over a bad space.

The Cursed Dice Block can be a curse or a blessing in disguise. When used on another player or yourself, it will restrict the number of spaces you can move from one to three. If a certain player is closing in on a star, you can throw this on them to slow them down. Alternatively, you can use it on yourself to limit how far you wish to move if you are looking to land on a particular space.

It is worth bearing in mind that if a player has a double dice, triple dice, or a custom dice, in their possession, they can use it to nullify the effects of a Cursed Dice Block that has been placed on them.

The Golden Pipe is a pricey item but it is a surefire way of getting to Toadette and buying a star. The Golden Pipe becomes available to purchase in the later part of a game (around the last 5-10 rounds), and can be purchased from Toad’s Item Shop or gifted by Toad to a certain player when five more turns remain. It costs 25 coins from the Item Shop but if you have been saving up your coffers, it will get you that much closer for a star.

When used, the Golden Pipe will place the player just before Toadette, so regardless of what you roll on the dice, you will be able to pass by her and buy a star. The Chomp Call is quite a useful item that calls upon chomps to chase Toadette off to another space on the board. You would probably use this item when you have little chance of reaching Toadette yourself and other players are much closer to her. Be warned though, the Chomp Call is guaranteed to upset some players when used, especially if it forces Toadette to move well out of their reach.

The Boo Bell will summon a Boo for you who will then ask if you would like them to steal coins or a star. Stealing coins is free but stealing a star costs 50 coins. This is a last-ditch effort for anyone who is really lagging behind or for someone looking to sabotage another player who is in the lead.

The Boo Bell is one of those items that can be found in an Item Space minigame.

“I Challenge You To A Duel!” The Deuling Glove allows the player who used it to challenge another player on the board to a 1 vs. 1 minigame. The glove user can set a limit in coins (which cannot be higher than player with the lowest coins’ amount) that will be offered as winnings to whoever comes first

The Plunder chest is an item that allows a player to steal an item from another player. What item you will be able to steal is randomized but if they only have one item, you can take a pretty good guess that it will be that one you will steal. If someone has multiple items, there is every possibility you could snatch their best item (like their Golden Pipe for example). On most of the boards in Mario Party Superstars, there is a locked door or two that can only be opened using a Skeleton Key. These doors can lead to shortcuts or to special areas that could reward players with bonus coins or even a star. Skeleton Keys only cost 3 coins at Toad’s Item shop so it is well worth having one in your inventory should such an occasion arise when you could use one.

The Dash Mushroom is a handy item to use if you don’t trust your luck with dice throws. Using the Dash Mushroom will add 5 spaces to your dice roll so even if you roll a poor one, you will still be able to move six spaces. You can acquire a Dash Mushroom in various ways. You can purchase it from Toad’s Item Shop, find it in an Item Space Minigame, or even in a roulette upon landing on a Lucky Space. This brings our little guide to a close. We hope you have found it helpful and that it gives you a better idea of what each item does in Mario Party Superstars. The next time someone is hosting a Mario themed party and breaks out Mario Party Superstars on Nintendo Switch, you will have better knowledge of how to effectively utilize any items in your possession.