[Interview] Looking for the Meaning of Life with Ultreïa 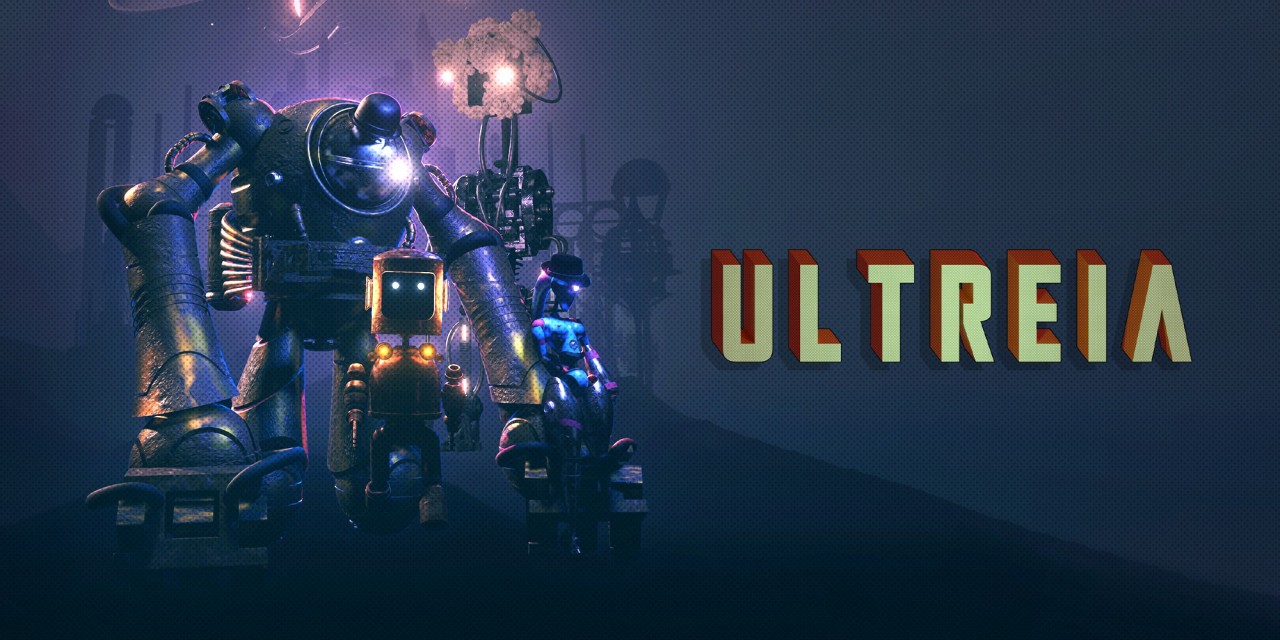 42! The answer to life, universe and everything!

Just in case you missed it, on March 25, 2022, with RedDeerGames on board as publisher, Ultreïa finally made its Nintendo Switch debut. Ultreïa is the point-and-click story of a robot named Nymo, and Nymo’s quest to discover the meaning of life and we recently had the chance to speak to both developer and publisher, regarding Ultreïa.

So, what better way for us to treat you this easter, than with another Miketendo64 interview, and in this instalment, we’ll be introducing you to developer, Olivier De Rop:

Miketendo64: Before we dive right into the probing questions, we always like to begin by asking a couple of easier questions first. Therefore, would you be so kind as to introduce yourself to our readers and tell us a bit about yourself and your background?

Olivier De Rop: My name is Olivier De Rop. I am 31 years old, and I live in Belgium. I work as a freelance designer for projection mapping installations. I released a short demo of “The Axolotl” in 2017 and I decided later to work on a full game, Ultreïa.

Miketendo64: And now to follow-up, what is the extent of your involvement with Ultreïa?

Olivier De Rop: Because of the sanitary situation, all mappings events were cancelled. I had a part time job in a lovely organic grocery store but I would work every day on Ultreïa and think about it all the time. Ultreia started out as a solo project – it was my creation, from the design to the gameplay. I later got in contact with Yann Latour, who composed the music for the game.

Miketendo64: To properly kick things off, can you tell us a bit about Ultreïa? What is it and how does it play?

Olivier De Rop: It’s a point-and-click game inspired by classic games from my childhood, such as Monkey Island and Grim Fandango. The gameplay is really simple: find items, combine them, and talk with characters to figure out how to progress in the story. Most of the fun is based on the very satisfying feeling of finding the right item to use in the right circumstance.

Miketendo64: With a robot protagonist named Nymo, who has recently lost his father, we can’t help but wonder if Finding Nemo may have influenced Ultreïa in some capacity? And while we’re at it, where else did inspiration for Ultreïa come from?

Olivier De Rop: No actually, it’s just a coincidence. I chose the name “Nymo” because it means “nobody” in Latin, which makes sense at the end of the game.

“The Law of Non-Contradiction” is the third episode of the third season of the FX anthology series Fargo.

During the episode, there’s a story within the story of a robot who can only say the phrase “I can help!”. That cartoon is dark, but so cute… very emotional. I think this animated short is my main source of inspiration. I didn’t think that much about it when I designed Ultreïa but usually that’s how it goes. The deeper inspiration is sometimes unconscious.

The more obvious inspiration is in the design of Mount St-Troy, inspired by the city of Rubacava in Grim Fandango. The shape of Nymo is also close the cute robot from the first episode of “Love, Death and Robots”.

Miketendo64: With each robot said to have their own unique language in accordance with their personalities and functionality, could you give us a couple of examples of this and provide a brief account of how you came up with each sound/language used?

Olivier De Rop: Some characters have an animal corresponding to their attitude, like the bartender as a pig, or Ellie as a bird. I would mix sounds between machines, animals, or me goofing around my microphone.

The only “human” voice is the old robot at her balcony in Mount Saint-Troy. The sentence is then randomly generated based on its length.

Blowing off some Steam:

Miketendo64: When you first started working Ultreïa, did you ever have a specific console in mind that you would like to release it on, or was you more focused on developing the game first and then deciding on platforms at a later date?

Olivier De Rop: I was focusing on the PC version thinking that a point-and-click is more of a PC genre but when RedDeerGames published it on Nintendo Switch, I changed my mind. It ran smoothly and was not required at all. The player can navigate with the joystick or even use the touch screen to ‘point-and-click’. The only thing I did know, is that I didn’t want to release it as a phone application.

Miketendo64: Being the point-and-click game that it is, was any other genre considered for Ultreïa?

Miketendo64: Having initially released Ultreïa in 2021, how well did the game perform on Steam?

Olivier De Rop: I am not good at marketing, but it has 100% positive reviews. I haven’t sold that many copies yet, but people really seem to like the game. I can’t afford to be an indie dev full-time, but it sells well enough to encourage me into making another game.

A New Game is already in the Works:

Miketendo64: With it stated that Ultreïa is a game players should be able to complete between 4-5 hours, game competition time, is never a good indicator of how long a game takes to develop, so just how much time did you invest into the development of Ultreïa?

Olivier De Rop: About 7 to 8 hours every weekday, and about one hour a day on weekends. I kept this rhythm for about a year and a half.

Miketendo64: With robots occupying the finished version, was Ultreïa always intended to be a game based on robots, or were other species and life forms first considered?

Olivier De Rop: Yes, Ultreïa was always set to be about a little robot searching for the meaning of life.

Miketendo64: As the man responsible for developing such an incredible point-and-click game, are there any games of this genre that you love to play and happy to recommend to others?

Olivier De Rop: It’s more of an RPG but it has a point-and-click feeling to it: Disco Elysium is my favourite game released in the last few years.

I also love all the classics by Ron Gilbert or Tim Schaeffer. The games from Amanita Design, especially “Happy Game”, “Machinarium” and “Samororst 3” are absolute master pieces. “Chains of Satinav” and “Deponia” from Daedelic are also great references of the point-and-click genre. I would love to try Primordia by “Wormwood Studios”.

Miketendo64: If you had to choose between developing a continuation to Ultreïa, be it as a full-fledged sequel or DLC, or work on something entirely new, what would you preferred choice be?

Olivier De Rop: I am currently working on an entirely new game called “Metal Ape”, a point-and-click / narrative experience that includes dice rolling, crafting, etc… I can’t wait to share it with you.

Miketendo64: Since we are a Nintendo site, with the likes of WayForward being allowed to work on the upcoming Advanced Wars 1+2: Re-Boot Camp and Brace Yourself Games developing 2019’s Cadence of Hyrule: Crypt of the NecroDancer Featuring The Legend of Zelda, if you had the chance to work on ANY Nintendo IP, which one would be your dream come true and, if you were in charge of the entire project, what kind of game would you like to make?

Olivier De Rop: That’s a tough question… Zelda inspired by “Eastward” could be really cool. I would love to work on a top-down pixelated game.

Miketendo64: Other than Ultreïa, do you have anything else lined up in the pipeline that gamers the world over could hope to enjoy sometime later in 2022 and 2023?

Olivier De Rop: The name Ultreïa comes from the motto of the pilgrims traveling on the Camino de Santiago, which is also a pilgrimage in search of the meaning of life. On the way, everyone greets each other with ‘Ultreïa’ which literally means ‘to go beyond’ – horizontally by foot, and vertically by spirit.

I would also like to thank you and everyone who has played Ultreïa for their interest. I was really happy to talk about it.

Our gratitude goes out to Olivier for taking the time to partake in this interview and to our readers. Ultreïa is available now on the Nintendo Switch, for anyone wishing to check it out. For a little more on Ultreïa and other games, why not come back tomorrow when we share the second part of this interview, which sees us talking to Ultreïa publisher, RedDeerGames.

NOTHING HAPPENS WITHOUT A CAUSE – The great loss raises questions – why are we here when everything is coming to an inevitable end? Our little robot protagonist called Nymo has just lost his father and he asks himself these questions.

As a pilgrim, you will lead his journey, which is supposed to bring you closer to the meaning of being but also seek out and take revenge on the killer of your guardian.

POST-APOCALYPTIC WORLD OF ROBOTS – In Ultreïa you will have the opportunity to visit a unique world full of robots. Hundreds of different robots live on the surface, which resembles visions from post-apocalyptic stories – gathering, among others, in the town of Mount St-Troy.

However, beneath the earth, there are creatures that exist in the darkness and are permeated by it. On your journey, you will explore the planet’s surfaces, underground and much more!

CLASSIC ADVENTURE WITH A GRIM AND GLOOMY AMBIENCE – Everything you love about point ‘n click games – collecting items and lots of interaction with them, solving challenging and unusual puzzles, talking to NPCs with lots of dialogue and an engaging story.

All this is set in a dark world, emphasized by a specific graphic style and a beautiful original soundtrack by Yann Latour.