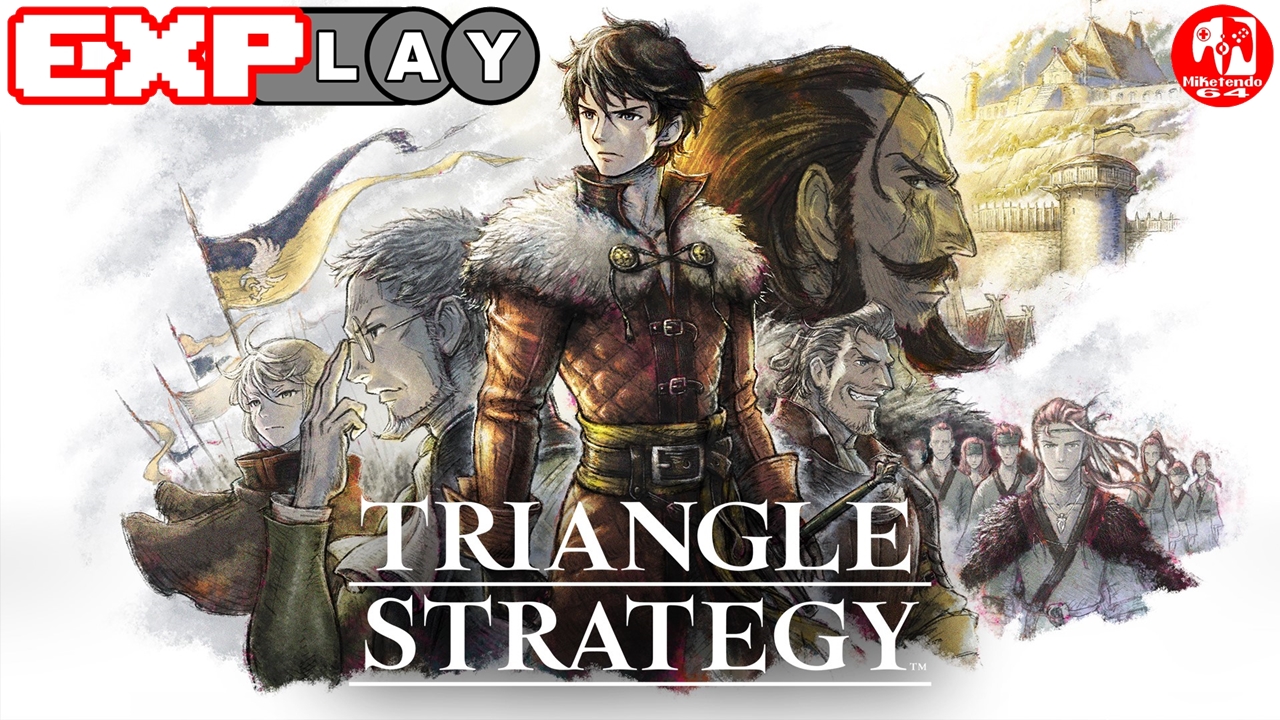 Welcome to EXPlay, (Explain & Play) the review series where we care not for scores but tell it how it is when it comes to every game we get our hands on, whilst also taking the time to include some lengthy gameplay, to give you the reader, the chance to shape your own impressions and views whilst watching and reading. In this installment, we’re covering TRIANGLE STRATEGY by developer Team Asano.

The game takes place in the fictional continent of Norzelia. Thirty years have passed since the three neighboring nations of Aesfrost, Glenbrook, and Hyzante, were in conflict with one another in what was referred to as the Saltiron War. The main protagonist is a young man called Serenoa, who recently became lord of House Wolffort, one of the three high houses of Glenbrook who serve the Royal Family.

With the great Saltiron seeming to be behind them, the future was looking bright. A joint venture between Aesfrost and Glenbrook and an alliance between the three nations brought peace to the land but unfortunately, it was not going to last for long. As greed and corruption begins to fester and brings about a new conflict.

TRIANGLE STRATEGY is a game in three major elements; story, battle, and exploration.  The story is told through a series of cutscenes and uses the same sprites and environments that are seen throughout the whole game. Exploration are small sections between story cutscenes and battles that allow you to walk around certain areas like towns and villages to talk to the local NPC’s so you can find out useful information that might help you later and in turn can change the direction of the game’s story.

The combat of TRIANGLE STRATEGY reminds me a lot of the turn-based strategy mechanics of Fire Emblem. You must take it in turns to move your army of fighters around the grid-like battlefield and take out the enemy units. Each unit in your army has a number of varying parameters that affect how far they can move, the amount of damage they can do and, of course, how much health they have, strength, defense. etc. They also have a select set of skills based on their class. Serenoa for example is a swordsman, he has average move distance, low defense far but can do more damage. Prince Ronald on the other hand is a horse-mounted unit armed with a spear. He can move further, has average defense and can also attack two enemies at once if they are one behind the other.

On a single turn you can only use the selected unit. With them, you can move and attack or use an item. Whether you move first to attack or attack first and then move to a better position is totally up to you as you strategize the best way to claim victory. Some units need to be adjacent to the enemy in order to attack them, others can have ranged attacks and administer them from a distance. Not all units are melee fighters or use traditional weapons, some possess magic and cast elemental spells upon enemies. There are even a number of units that possess healing abilities that can heal other units when needed.

The combat itself is rather straightforward but how to claim victory is where the challenge lies. There are certain secondary effects to magic attacks and items that you can use in your Favour. When an ice spell or item is used, it may cause an area of the map to freeze. Frozen squares restrict unit movement and can block certain paths. The ice can then be melted with fire attacks and will turn to water. If an electric attack is used on wet tiles, it can electrify enemies that are standing on wet tiles near where the attack hit. You can also use fire attacks to set tiles ablaze which will harm enemies if they pass through.

During any time when you are not engaged in combat, you can visit Serenoa’s encampment. This is where you can find the blacksmith who will be able to improve your weapons and increase your stats, as long as you have enough materials and gold to do so. You can also purchase items and accessories from the merchant here and also take part in mock battles to learn different strategies and increase your units’ levels. As you progress through the game, the battles get considerably harder and have a minimum level recommendation to indicate that you should make sure that your units are at least that level before taking on the battle. If a battle is far too tough for you, you can lower the difficulty in the settings to make it easier.

TRIANGLE STRATEGY is one of those games which you will either really enjoy or just not vibe with at all. The cool 2D HD 16-bit graphics can be appealing to some people but others will not be so easily swayed by them. My personal issue is not with the graphics (they are part of its charm after all) but that the game itself is very story heavy. Actual gameplay only seems to kick off after about 30 minutes of the opening cutscenes and then there are long periods of even more cutscenes in between combat sections.

I did enjoy the actual combat of the game and I particularly like the scales of conviction feature in which seven of the main characters cast their vote into the scales and the winning vote dictates the direction the story will go. I also like the fact that you can try and persuade some characters in order to swing the votes in a way that is more favorable to you. How you compose yourself in the game also weighs in on your character’s convictions and can affect the relationships that the supporting characters have with the main character.

TRIANGLE STRATEGY is a game that will surely be a hit with fans of the genre but may struggle with enticing new players. Its heavy focus on the story is fantastic for world building and fleshing out the characters but the actual gameplay elements are few and far between. I would enjoy TRIANGLE STRATEGY far more as a feature length animated film but it as a game, it just struggles to resonate with me.