[Interview] Dreaming Up a Sequel with Bedtime Digital’s Figment 2 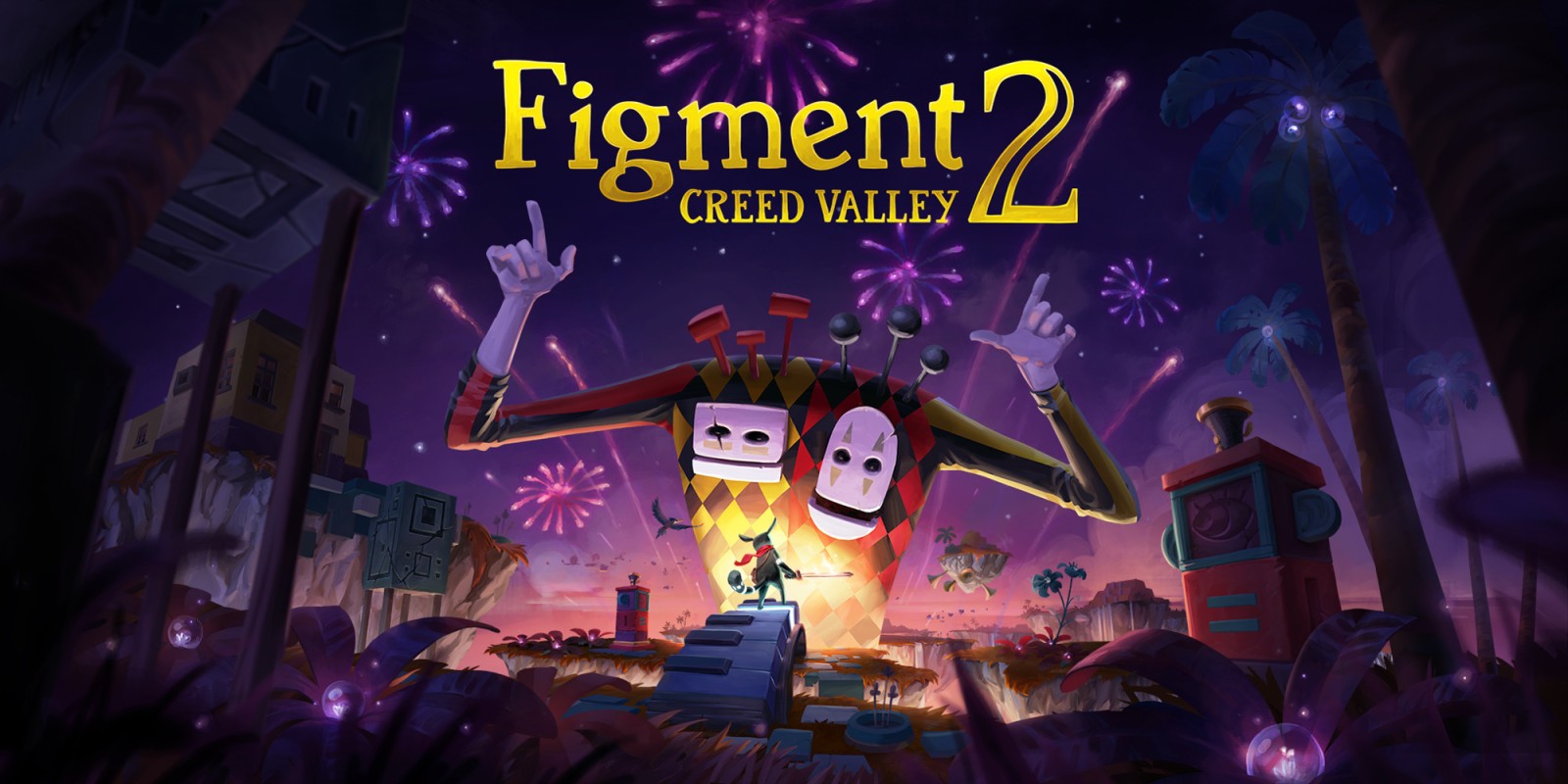 A Figment of their imagination…

Earlier this month, we got the opportunity to reach out to Bedtime Digital Games and chat to Hans Haave, regarding the upcoming Figment 2: Creed Valley.

Having learned all kinds of trivia about the game, we’ve spent the last couple of weeks putting together some extracts and sharing them as part of a mini-interview series and now it’s time to bring all the teasing to an end as we share the complete interview with all the answers you know and the ones you don’t.

Without further ado, it is time to get this complete interview underway, and for that, first we must welcome back Hans Haave:

Miketendo64: To properly kick things off, can you tell us a bit about Figment 2: Creed Valley? What is it and how does it play?

Hans Haave: Figment 2: Creed Valley is an action-adventure romp into the human mind. It features musical boss fights with their own theme songs, a hand-painted universe, and a colourful cast of characters.

Hans Haave: Figment 2 is a standalone sequel to Figment, meaning it’s not necessary to play the first one. I still recommend it as you may miss some references.

Putting the Puzzle Together:

Hans Haave: The main inspirations for the nightmares were stories drawn from personal experience from people on the team. Of course, you can feel some Psychonauts and some Disney in Figment.

Miketendo64: With music being such a huge part of Figment 2: Creed Valley, how involved was the process of constructing the game’s soundtrack and if any, what hardships were faced in the process

Miketendo64: With Figment being the puzzle games that they are, how do you design the puzzles you create? Is there anything specific you try to design? What’s the differences between the puzzles that do make the cut and don’t?

Hans Haave: Niels starts with the general theme and constraints of an area. For example, the Ethics Maze in Figment 2 is composed of circular rooms and represents our ability to judge if thoughts are valid or not worth having. So, there’s some logic puzzles as well as combat to symbolize the struggle it is to have these thoughts.

A lot of QA goes into the puzzles to make sure we’re not creating anything too linear or too obscure for people to solve.

Miketendo64: Are there any puzzles you couldn’t implement in Figment 2: Creed Valley that you hope to use for a future game?

Hans Haave: Perhaps, can’t say much about that.

Hogging all the Glory:

Hans Haave: Figment 2 originally started as a DLC to Figment, so we started working on it right away.

Miketendo64: When developing Figment 2: Creed Valley, was there anything from the outset that you wished to accomplish in this title that you couldn’t in the previous instalment?

Hans Haave: We wanted to implement more of the designs and gameplay mechanics that we learned along the way. You could say that having a brand-new set of animations for every character and updated combat systems are a product of that.

Miketendo64: Game development is never without its own issues. From ideas that can’t be realized, core gameplay mechanics getting overhauled or budgetary cuts, was there any cut ideas and content from the first Figment game that you were able to successfully implement or revisit, whilst developing Figment 2: Creed Valley?

Hans Haave: The first nightmare, The Black Hog, in Figment 2 was supposed to be in the first game. We didn’t have room to put him in initially, glad he’s finally getting the limelight he deserves.

Miketendo64: Are there any definitive boss fights or locations discoverable within Figment 2: Creed Valley that will forever stay with you? If any, why?

Hans Haave: The Black Hog for sure. I love his rock n’ roll soundtrack. I don’t want to spoil all the encounters players will have against him, but the final one is quite the theatrical showdown.

Hans Haave: We’re a much more experienced team now. It feels good to be confident in our skillset and have realistic expectations as to what we can achieve.

Miketendo64: At Miketendo64, we’re huge fans of demos. They’re a great way to get introduced to a new game you’re unsure about and we simply can’t get enough of them. Having played the demo of Figment 2: Creed Valley and falling in love with it, we wanted to know a bit more about the development process behind the demo. How much time goes into the demo development process and how does it affect game development of the full title?

Hans Haave: Having a demo on Switch is a much more involved process as it is to have a demo on Steam. We wanted to include a segment of the game where players are immediately presented the Figment world and steadily learn the mechanics. Hence why the first level of the game makes sense to be a demo level.

The demo took around 2-3 months to do, from making it able to run on the Switch’s hardware, getting through QA, to passing certification. So, it takes quite some time away from production. In all, it was incredibly worth it due to our feature in the December Indie World Showcase.

Miketendo64: If you had to pick one singular moment that is your most favourite moment during the entire development of Figment 2: Creed Valley, what is it and why?

Hans Haave: A personal victory was the recent Indie World showcase by Nintendo. Growing up with a Game Boy, it was like a dream come true to see the game I’m working on being featured by them.

Past, Present and Dusty’s Future:

Miketendo64: Regardless of the game, there will always be feedback in some form. Did any of the criticisms or feedback from Figment that reached you, result in any of the tweaks or changes that were implemented in Figment 2: Creed Valley?

Hans Haave: Yeah, we updated the combat. Many people found Dusty’s interaction with enemies in the first opus to be stiff. So, we added a directional dodge, some new moves, and a bunch of other nerdy stuff to make it more enjoyable for players to fight in-game.

Miketendo64: With regards to Figment, how has the game performed since 2017?

Hans Haave: It’s been picking up in the past year or two. With Figment 2 right around the corner, it’s awesome to see a bunch of people play the first one to prepare for the standalone sequel.

Miketendo64: After Figment 2: Creed Valley, what is next for you? Is there anything in particular you would like to achieve in 2022, be it related to your personal life or related to another kind of game you would love to work on?

Hans Haave: For now, let’s get Figment 2 out there to the people. We’re also publishing The Forest Quartet, which is scheduled to release later in 2022.

Miketendo64: With Dusty starring as the protagonist in both Figment games, could you see yourselves continuing his story in the form of a third instalment, a Figment 3 if you will, or, should a third game occur, would you attempt to tell a new story, with a new hero, but still set in this amazing, illustrious universe your team has lovingly created?

Hans Haave: Illustrious universes will always be part of us. For Dusty, who knows where his travels will lead.

Miketendo64: In the event you do choose to do more with the Figment universe, would you prefer to stick with the current formula and genre, or would you like to branch out into something new? Spin-offs? Prequels? Sequels? Different genres entirely, such as metroidvania or side-scroller?

Hans Haave: It would be fun to explore different genres in the future for sure.

Miketendo64: Since we are a Nintendo site, with the likes of WayForward being allowed to work on the upcoming Advanced Wars 1+2: Re-Boot Camp and Brace Yourself Games developing 2019’s Cadence of Hyrule: Crypt of the NecroDancer Featuring The Legend of Zelda, if you had the chance to work on ANY Nintendo IP, which one would be your dream come true and, if you were in charge of the entire project, what kind of game would you like to make?

Hans Haave: Tough question, we’re open to any IP. Nintendo hit us up.

Miketendo64: Since Figment 2: Creed Valley is by no means the only game Bedtime Digital has been involved in, we would love to take this moment to talk about some of your other games. So, are there any games you would love to recommend to our readers?

Miketendo64: Other than Figment 2: Creed Valley, does Bedtime Digital have anything else lined up in the pipeline that gamers the world over could hope to enjoy sometime later in 2022 and 2023?

Hans Haave: Sad to say, otherworldly forces have shut my mouth. Ask me a bit later to see if my answer’s changed!

Hans Haave: Thanks for reading, wishlist Figment 2, stay safe out there and see you all around.

A huge “thank you” goes out to Hans for being very forthcoming with his answers and to our readers. We hope you enjoyed this interview as much as we did and look forward to the next one.

Feel free to learn more about Figment 2: Creed Valley, when it releases on the Nintendo Switch later this year, on August 19, 2022.