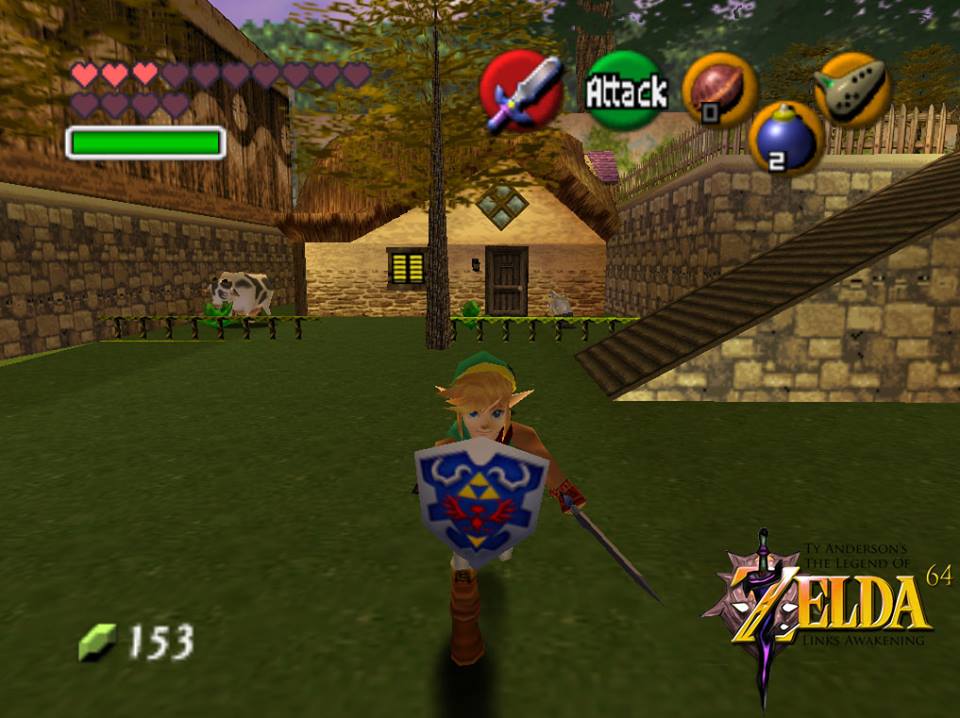 Return to a modded Koholint…

In fact, we’ve actually spoken to Tyrone Anderson back in 2016, when he was developing a Link’s Awakening 64 mod and we couldn’t resist the chance to learn a little more about the mod and other things Devoke Studio has going on, so to avoid any confusion, we opted to separate these answers from the rest of our QuaQua interviews and that leads us to now, with us releasing the first part of an additional interview with Tyrone Anderson, where we discuss all things Zelda:

Miketendo64: And now to follow-up, what is your role at Devoke Studio?

Miketendo64: As the man behind Link’s Awakening 64, which, back in October 2016, development was around 25% done. Have you been able to do much work with the mod ever since?

Tyrone Anderson: You know, it is funny to look back at who I was back then and to see how much that little fan-made love letter to Nintendo would affect my life. Before then I had always been told and believed becoming a games developer was a pipe dream. Yet here before you, I stand today.

I was naive to have given that percentage when I did. In fact, since then I scrapped almost all of the original work I had done, and I and the small team of volunteers I work with across the world on LA64 began to focus on getting the game hardware compatible.

I won’t give too much away about it, but is not just me working on this project any longer, in fact, I have been away from the project for a good few months now, but there is a team of professionals, from across the globe and all walks of life, hoping to honor Nintendo with our homage to their great work in the world of game development. But I am coming back to help the project once more after the release of QuaQua.

To this day, the entire overworld of Link’s Awakening 64 is now finished, alongside the models for all the NPCs, as is much of the music. With the release of the new OOT Decomp, new doors of possibilities and mechanics are opening to us. It is only a fan passion project that I am working on, on the side, and nothing to do with Devoke Studio or my professional work – so you will not be able to see updates on this project through Devoke Studio, but it is the project where I forged my skills and became the developer I am today, and it is something I and the other developers who have dedicated years of our free time to, will be seeing through to the very end.

Miketendo64: Still on the subject of all thing’s Link’s Awakening, let’s turn our focus onto the 2019 release of The Legend of Zelda: Link’s Awakening by Greezo. Did you ever check out the remaster for yourself? How did you find it?

Tyrone Anderson: I did! Initially, I was shocked by its announcement. It seemed like such a strange out of the blue choice to me. Clearly, there was a market for it though, as if you remember my announcement of Link’s awakening 64 gained around 300,000 views in just 4 days of it being live. Proving there was still a huge market for a remake of that old game. Part of me likes to imagine my silly project inspired Nintendo to make their own official remake, but I think I really am dreaming by saying that. Overall, it was a wonderful faithful and charming remake.

Miketendo64: One final Zelda related question. With the likes of an Expansion Pass for Nintendo Switch Online, players now have the opportunity to play The Legend of Zelda: Ocarina of Time as part of the Nintendo 64 games on offer. Have you had the chance to replay the classic title in recent months? If so, how did you find the experience?

Tyrone Anderson: I have not yet, but I still own my N64 and original copy of Ocarina of Time and Majora’s Mask. I wonder though, would Nintendo ever open this service to be able to play modded games. I know hackers have already attempted to put custom ROMs of Mario 64 on their consoles.

I am sure this would be an amazing market for Nintendo, and I know the majority of modders and developers would gladly offer their creations to Nintendo for free, as truly every one of them is a letter of love to the company. It would be a smart move for them for sure, and the only real expenditure would be to police the quality of the mods themselves. I think in recent years, Nintendo has come to accept and be far more understanding of the modding community as a whole. Of course, big names like Kaze Emanuar create a whole career from modding alone.

If you would love to know more about QuaQua, Devoke Studio’s first game to see a release on Steam, on February 1, 2022, you can do so with our QuaQua series of mini-interviews. Part 2 of our interview with Tyrone Anderson, is focused on Devoke Studio’s history and philosophies and eager readers will be check it out, tomorrow.