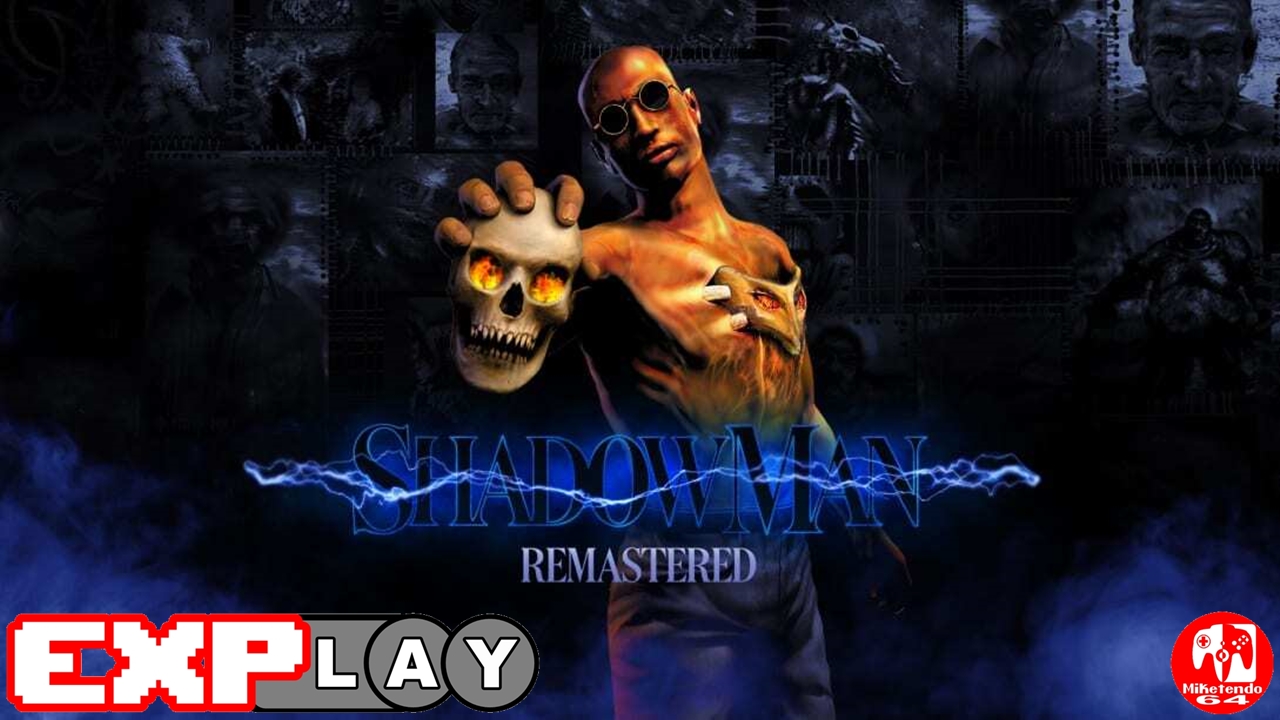 Welcome to EXPlay, (Explain & Play) the review series where we care not for scores but tell it how it is when it comes to every game we get our hands on, whilst also taking the time to include some lengthy gameplay, to give you the reader, the chance to shape your own impressions and views whilst watching and reading. In this installment, we’re covering Shadow Man Remastered by developer Nightdive Studios.

Mike LeRoi’s iconic catchphrase “The Horror. The Horror. I embrace it,” is one that is firmly etched into my memories. Shadow Man is a third-person, action platformer game originally developed by Acclaim for the Nintendo 64 back in 1999. I remember playing this game back in the day and it was probably one of the darkest, most gruesome games I had ever played at the time. The bloodied walls of the asylum, the grotesque monsters that would attack you, and the hellish sights that await around every corner, Shadow Man made Resident Evil look tame in comparison.

Shadow Man Remastered is another faithful restoration from the brilliant team at Nightdive Studios. Much like they did for Turok Dinosaur Hunter, Turok 2: Seeds of Evil, DOOM 64, and Quake, Nightdive have given Shadow Man Remastered a massive overhaul whilst staying true to the original design of the game and maintaining the use of the low poly models to keep the game as authentic to the original as possible.

Shadow Man Remastered follows Mike LeRoi, a man who may look rather ordinary in the world of the living but in the land of the dead, he is known as the Voodoo Warrior Shadow Man. Mike can traverse between the two worlds: Liveside and Deadside and has to maintain the fragile balance between them.

Looking to upset that balance is the demon, Legion. Legion has recruited the help of the infamous Jack the Ripper to build him a Cathedral to Pain and with it, they will create an army of the damned and bring about the apocalypse. Jack also recruits four other notorious serial killers to join their cause who, with Jack, will be known as “The Five”. Shadow Man must stop Legion and The Five before they can achieve their goal.

At first glance, the look of Shadow Man Remastered may actually shock you. It does look very dated, and you may think of it as a relic of the past that should probably had stayed buried. However, you do have to look past that though as this is literally a piece of gaming history that has been preserved and adapted for modern audiences.

This remaster may not look like much from its appearance at first glance but compared to the original, it really is an improvement as the textures and models have been given a HD makeover. You can see the differences for yourself in-game by going to display settings and turning HD Textures ON or OFF.

The gameplay in Shadow Man Remastered is a lot more refined than the original as well. The camera feels more fluid and does a much better job of following behind the character. In the original N64 game, the camera was a hot mess and the controls were janky at best. Fortunately, the controls in the remaster feel a lot smoother which, was a surprise to me and made the game much more comfortable to play.

The gameplay design of Shadow Man Remastered is much like that of a giant maze. It is very easy to get lost and can be confusing at times as there is no map or indicators as to indicate where you are or where you need to go next. The game features a large hub world of sorts that has different levels (or probably best referred to as locations) branching from it. When you visit a new location, you will at some point unlock a fast travel point that will make it easier to go back and forth between locations.

Each location has a particular theme and possess their own set of puzzles and platforming sections that you will need to overcome. The puzzles are not very complicated which is a small mercy as the locations themselves are not very straightforward. You will backtrack quite a lot in this game, especially between locations to collect Dark Souls. Dark Souls work like Power Stars in Super Mario 64. You have to collect a certain amount before you can access new areas and locations. A key difference though is that Dark Souls power up your Shadow Gun as well and make it more powerful with every charged shot and allow you to use your voodoo weapons more often.

As mentioned before, you will backtrack quite a bit and that is because as you progress through each location, you will find Key items like Voodoo Weapons and skills called Gads. These objects will help you access new areas in previously visited locations. For example, the Toucher Gad will allow Shadow Man to push burning blocks and the Flambé can be used to burn down skin doors. All items and Gads are worth picking up and will help in your Exploration of Deadside and Liveside.

The main objective of Shadow Man Remastered is to fight and defeat the Five serial killers and shut down the asylum. The Five are hiding somewhere in Liveside and you have to travel to their locations via corpse gates in the Cathedral of Pain. To get through the corpse gates you will need to find an object called a retractor. In the original game, two corpse gates were already open and only required three more retractors. In the remaster, however, you will need to find all five retractors that are hiding throughout different locations of the Asylum.

Of course, once you find a retractor and go Liveside via the corpse gates, you still won’t be able to defeat the serial killers as you are mortal in Liveside and don’t have your Shadow Man powers. To become Shadow Man in Liveside, you will need to collect three pieces of a special relic called L’eclipse. This will then allow you to fight and defeat the killers as you can use your Voodoo weapons and Shadow Gun in Liveside.

It is worth pointing out that the original Shadow Man game had content cut from the game as they were under time constraints to have the game ready for retail.  The Remaster has carefully reincorporated the cut content that includes three new locations for Shadow Man to visit. In the original game, three of the Serial Killers were fought inside the prison and two of the corpse gates were already open. The remaster gave each serial killer their own stage as originally intended and include the likes of the Summer Camp, Mojave Desert and the Playrooms.

More content was also added to the game including new audio, enemies, weapons and many other improvements (the full list of improvements can be found on the Nintendo. com gam listing). A lot of work and dedication went into making this remaster that you could say it is the definitive version of the original game. It stays true to the original whilst adding new/cut content that will definitely appeal to fans of the first game and provide a fresh experience for them.

Shadow Man Remastered was a game I never thought I needed until it was announced. I was a big fan of the game on Nintendo 64 and so when I heard it was coming to Switch, I just had to make sure I got it and relive the Horror all over again. I did fear that my personal memories of the game and the nostalgia may cloud my judgement and set me up for deception, realizing that the game has not aged well at all and feel nigh unplayable. This was not the case though as NightdiveStudios has done and an exceptional job of making this game just how I thought I remembered it and more.