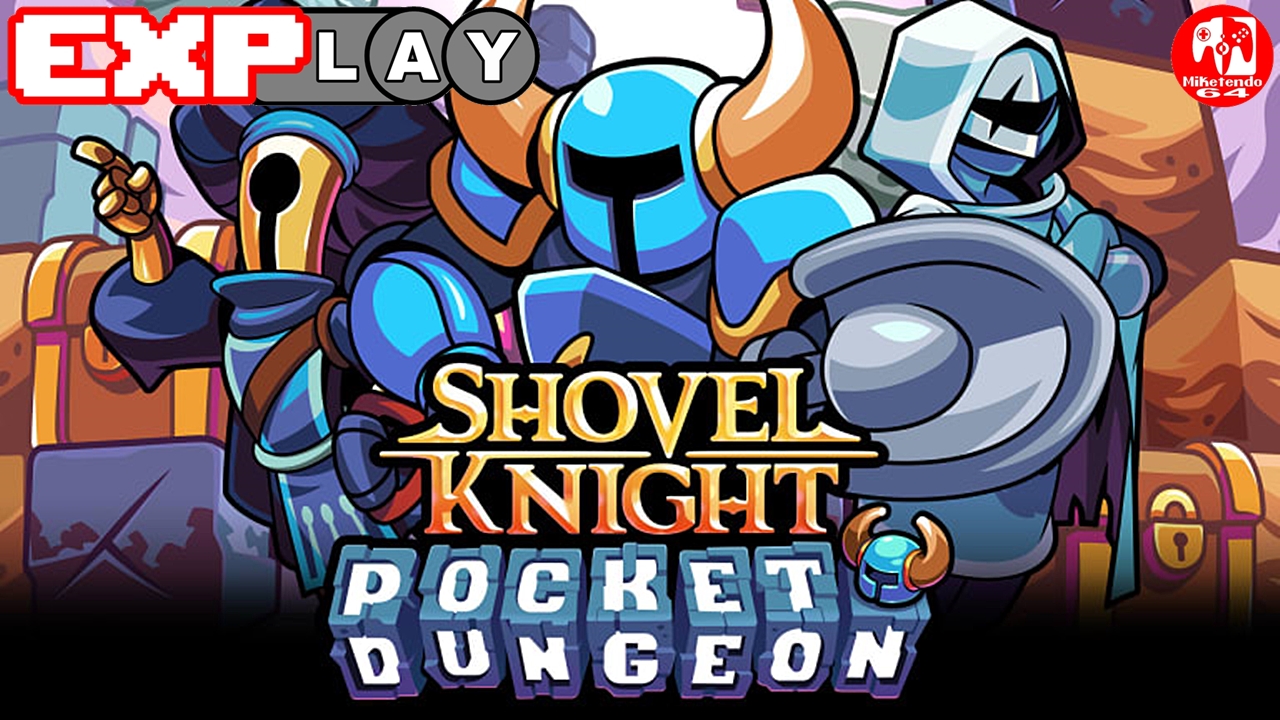 Welcome to EXPlay, (Explain & Play) the review series where we care not for scores but tell it how it is when it comes to every game we get our hands on, whilst also taking the time to include some lengthy gameplay, to give you the reader, the chance to shape your own impressions and views whilst watching and reading. In this installment, we’re covering Shovel Knight Pocket Dungeon by developer Vine.

One day, as Shovel Knight was resting beside a campfire, a strange, wrapped gift appears out of nowhere. Curious as to what the gift might be, Shovel Knight approaches the gift and opens it. Inside was a peculiar cube that suddenly activates and whisks away Shovel Knight to a strange world that was like his own and yet, not. He is greeted by the mysterious Puzzle Knight who informs our blue armored hero that he is inside the Pocket Dungeon and that it is an unsolvable puzzle. Not one to sit idly by, Shovel Knight begins his quest to solve the Pocket Dungeon.

Shovel Knight Pocket Dungeon tasks players to clear rooms upon rooms with falling blocks and enemies. Clearing enough away will allow keys and locked chests to appear with the chests containing useful items to help defeat enemies. As you attack enemies, you will do damage to them but they can also do hurt to you. Many are even stronger than you and can do quite a lot of harm to you if you are not careful. To help recover health when it gets low, you can collect potions but they can be in limited supply at times.

If the inevitable happens and you die in a stage, it is not necessarily game over. You will respawn as long as there are enough free spaces in the stage to respawn to. Of course, upon death, you will drop your bags of gems and they will float around in the space where you died, waiting for you to recover them. Enemies and blocks will continue to fall while you are getting revived so you will need to make short work of them when you return or you will be overwhelmed. If you don’t, the stage will simply fill up until there are no available spaces and it is game over for you.

Shovel Knight Pocket Dungeon is not a simple “clear your way to victory” kind of game, you must use strategy to be successful and beat each stage. Try to get enemies of the same type together and attack them in a chain. As you hit one enemy, those of the same type adjacent to them will also receive damage, as will those adjacent to them, and so on (providing they are all of the same type). By defeating those that are grouped together, you can score a chain bonus and will receive more gems as well as clear out a larger area in one go.

Speaking of Gems, they can be used to buy items that will grant you certain perks. In each stage, you will find a special chest that will warp you to an item shop. Bumping into any of the three items available will allow you to activate that perk, providing you have enough gems to purchase them. If you find yourself lacking in funds, you can go back out into the stage rack up some more gems and then return to the store to buy what you couldn’t before.

On some stages, you will also find a portal hidden inside a block that will take you to bonus room. The bonus room you visit can vary on each stage. Sometimes it will be a room full of enemies that you need to clear out or have a locked gate that requires three keys to open, which opens up another room with a special item. Other times it can even lead to a room with the Trouple King who will offer you a choice between two elixirs.

After every third stage or so, you will have to take part in a boss fight. Boss fights differ somewhat from clearing stages normally as you have to focus on beating the boss as opposed to clearing the room whilst waiting for an exit door to appear. Shovel Knight’s familiar adversaries like Plague Knight, King Knight, Spectre Knight, and Tinker Knight, just to name a few. There are even some new foes making their debut. Once you defeat them, they will join your camp and become a playable character.

Shovel Knight Pocket Dungeon is not a very long game. Once you are familiar with the controls and learn each character’s movesets, it can take around 30-60 minutes to beat the adventure mode. However, each run in adventure mode will differ every time as the blocks and enemies in each stage fall at random. This means that you will have to adapt your strategy on the fly and use quick thinking in order to claim victory.

If you tire of playing on your own, you can challenge your friends in Vs. Mode. Two players can compete against each other to clear their side before the other player does. Enemies and blocks that are cleared will be dumped on the other player’s side. The victor is whoever can fully bury their opponent’s side.

Like in other Shovel Knight games, Shovel Knight Pocket Dungeon also has achievements or “feats” as they are called in-game. You can unlock them by fulfilling certain requirements like unlocking a particular character, beating a stage without dying, etc. They don’t really unlock anything and are merely there to give you a pat on the back for doing, but for those who like games having achievements, this game certainly has them.

Shovel Knight Pocket Dungeon is the type of puzzle game you never thought you needed but wondered why we didn’t get it sooner? It is fun yet challenging and will even have you cussing at times but its rather unique gameplay and charm will constantly have you coming back again and again.