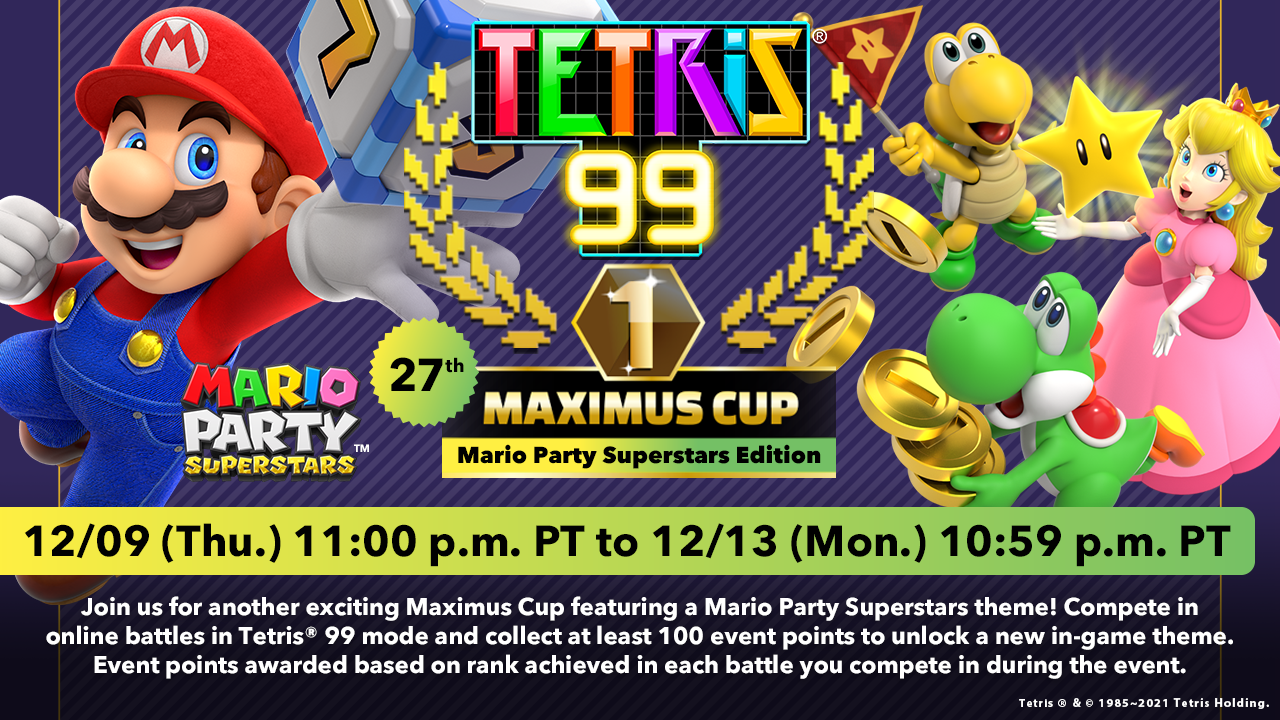 Tetris 99 Offers a Superstars Party with a New Mario Theme

Time to party like its Mario Party Superstars all over again.

Just in time for the weekend, Tetris 99 will be hosting its 27th Maximus cup and this time around, the theme on offer is none other than a special Mario Party Superstars one. Details regarding times and dates can be found below, along with a video of the new theme in action:

Join us for another exciting Maximus Cup featuring a Mario Party Superstars theme! Compete in online battles in Tetris® 99 mode and collect at least 100 event points to unlock a new in-game theme. Event points awarded based on rank achieved in each battle you compete in during the event.

99 players…but only one will remain! TETRIS® 99 is the iconic puzzle game as you’ve never seen it before. Can you pick the right strategy to best 98 other players online* – all at the same time?!

TETRIS® 99 is available as an exclusive offer for members of the Nintendo Switch Online paid membership service. After all, TETRIS® 99 is all about battling online for Tetrimino-dropping dominance against players around the world!

Make smart use of Tetris™ Line Clears, K.O. the other 98 players and become the sole survivor!

Calling all superstars! The Mario Party™ series is back with 5 classic boards from the Nintendo 64 Mario Party games. Race to get the most stars (and sabotage your opponents) on boards like the stellar Space Land or the spooky Horror Land! Party at your own pace by suspending a game and picking up right where you left off! The tides can turn quickly in Mario Party, so stay vigilant, partygoers. All modes can be played online*, too!

Play 100 classic minigames from the Nintendo 64 and Nintendo GameCube™ games and more in Mt. Minigames! – Try your hand at a superstar collection of minigames from throughout the Mario Party series. Whether you are saving up coins for stars in board game mode or enjoy one of the 7 modes included in Mt. Minigames, there is nothing quite like being the last one standing in Bumper Balls or the first team making it out of the darkness in Dungeon Duos. All minigames are played with button controls, so you can stick to the Joy-Con™ controller or bust out the Nintendo Switch™ Pro Controller or a Nintendo Switch Lite system.

Party with superstars near or far – Bring the party anytime, anywhere with same-system**, local wireless**, or online* play. Use stickers to praise or pester fellow players as you race across the board collecting stars. All modes support online multiplayer, so you can hop in with friends for a few minigames or a marathon 30-turn match. Victory is just as sweet (and stealing stars is just as satisfying) from anywhere across the globe.