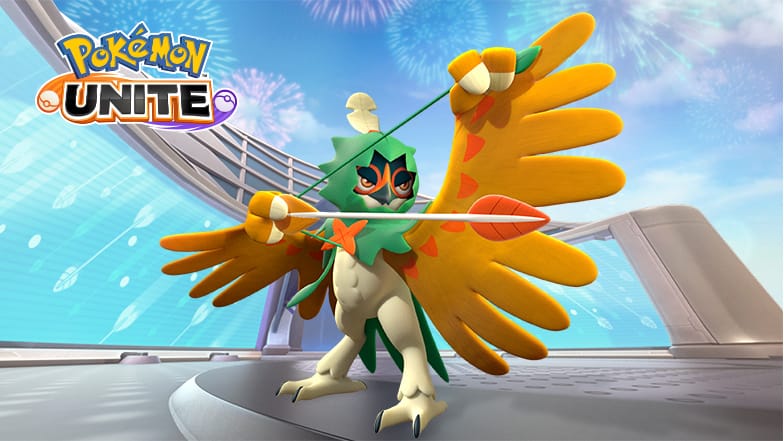 Archers at the ready.

Move over Pokkén Tournament DX, you are no longer the only Pokémon spin-off playable on the Nintendo Switch to feature the Arrow Quill Pokémon, Decidueye, as a playable fighter. A new update for Pokémon UNITE has released earlier than expected and Decidueye is battle-ready this very moment. Should you wish to learn a little more about Decidueye’s move-set, the following information has been provided:

Another Pokémon is ready to join your Pokémon UNITE ranks now that Decidueye has swooped into the game. Decidueye is a Ranged Attacker, so you’ll be able to get the drop on your opponents from afar. As you would expect, this Pokémon begins each match as the lovable Rowlet, but it evolves into Dartrix at Lv. 5 and Decidueye at Lv. 7.

Decidueye’s basic attacks increase in speed for a short time after one hits. This effect can stack, and with every third activation of this effect, basic attacks become boosted attacks for a short time. These boosted attacks fire more quills, but the damage dealt by each quill is decreased. Long Reach, Decidueye’s Ability, deals increased damage to distant opposing Pokémon.

You won’t be able to upgrade either of these attacks until Rowlet evolves first into Dartrix at Lv. 5 and then into Decidueye at Lv. 7. At this point, Leafage can be upgraded into one of two moves: Razor Leaf or Spirit Shackle.

Spirit Shackle charges power before firing quills in the designated direction. The damage dealt by the quills increases the longer power is charged, but Decidueye’s movement speed is decreased while charging. If this move hits after its power is charged to the maximum, it can stitch the opposing Pokémon’s shadow to the ground. The affected Pokémon will receive damage upon moving a set distance from that location, and its movement speed will be decreased for a short time. Upgrading Spirit Shackle will deal increased damage to opposing Pokémon with low remaining HP.

Your opponents will be wondering who’s there when Decidueye unleashes its Unite Move, Nock Nock, which it learns at Lv. 9. Nock Nock fires quills in the designated direction, dealing damage to opposing Pokémon. It ends by unleashing a particularly large quill that deals damage to all opposing Pokémon it hits. Nock Nock even deals increased damage if the opposing Pokémon’s remaining HP is low. While using this move, Decidueye becomes immune to hindrances but is unable to move.

If you want to take on your opponents while maintaining some distance, Decidueye could prove invaluable to your team. You can head over to the Unite Battle Committee shop and get Decidueye’s Unite license now.