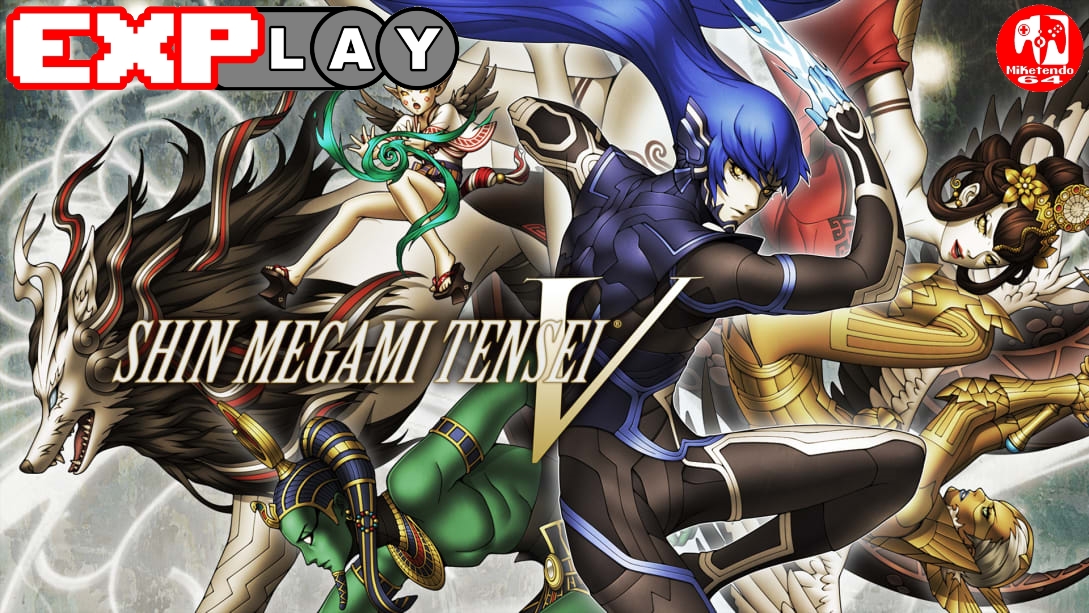 Welcome to EXPlay, (Explain & Play) the review series where we care not for scores but tell it how it is when it comes to every game we get our hands on, whilst also taking the time to include some lengthy gameplay, to give you the reader, the chance to shape your own impressions and views whilst watching and reading. In this instalment, we’re covering Shin Megami Tensei V by developer, Atlus.

Good things come to those who wait and Shin Megami Tensei V is certainly a game that has kept fans waiting. First announced in January 2017, as part of a special presentation hosted by Nintendo, to show off a variety of games in releasing on the Nintendo Switch, in the early days, any news related to the game was few and far between, but now the waiting game is over and the game is finally in our hands.

Still, before we dive into how it plays and handles, it is worth pointing out that one of the main reasons for the game having such a long development time, is because Atlus was having to develop a new game for a platform they’ve never worked on before, but also because the game was built using Unreal Engine 4. Having never worked with this engine before, there was a lot of trial and error, especially when it comes to incorporating new ideas, but also, with the Switch being a console that offered high-definition graphics, the new hardware capabilities did result in the game’s 200 demons taking three times longer to develop.

Now only to the game. In typical Shin Megami Tensei fashion, Shin Megami Tensei V is a role-playing game, with a large focus on story-telling, whilst offering the player plenty of choices throughout the entire game and variety and it all starts with a school student. As a male third-year student living in Tokyo and attending Jouin High School, normality is about to be thrown out of the window when a little investigation leads the protagonist into a tunnel and when the earth begins to shake, reality begins to warp.

It’s “Goodbye Tokyo,” and “Hello apocalyptic wasteland” that the local demons refer to as Da’at. Still, what is this place one might wonder? Be it a destroyed Tokyo in the future? A present-day Tokyo that is the result of the earthquake, or maybe, just maybe, it is the real Tokyo and the one the protagonist has been living in, is a false one created for humanity.

With so many questions and so few answers in the beginning, Shin Megami Tensei V is a game where you need to be in it to win it, becoming grossly invested in it to the point that no matter what happens, you’ll be willing to stick with it to the very and beyond and thanks to some interesting writing, plot points, and as long as demons, angels, conflict, and role-playing games are your thing, this will not be an issue in the slightest. Shin Megami Tensei V is a highly engrossing game and rather a beautiful one as well.

The designs of the characters, the demons that live in Da’at and environments themselves and for the sake of saying it, yes this is a game that looks rather attractive when played on your OLED, but even handheld on the original Switch, it is still a gorgeous game with an engaging soundtrack that follows a lot of regular RPG tropes. There is a main story and quests that help to progress the story, but in a hostile world where demons and angels are at war against one another, there are also NPCs who are happy to have a conversation with you and ask for your assistance in the form of side quests.

There’s also a large hunt at play, sort of similar to The Legend of Zelda: Breath of the Wild’s 900 Koroks, except this time around, it is 200 Miman and they are dotted all over Da’at, but thankfully, although “hidden,” they are hidden in plain sight and not under rocks, or requiring the completion of a little puzzle just to make them appear. Then there are the battles.

Battles are turn-based, with players actually able to earn extra actions in battle, should they use a skill the enemy is weak against, but should they miss or the enemy blocks the attack, they can lose actions. Of course, attacking isn’t your only option when fighting either, as players are free to try talking to enemy demons and seeing if they can negotiate with them, to see if you can get them to join you. Any monster that is at a higher level than the protagonist will refuse, but when you have levelled up higher, you can always come back to them at a later date and try asking again at another time.

Demons can try haggling you for anything, be it Macca or items, or just ask a series of random questions. Each encounter always proves to be interesting and engaging, especially when you go to speak to them Sometimes in these engagements, a demon that is in your party, will engage them in conversation instead. Because of things such as this and the prowess of each demon in battle, it is easy to become attached to those in your party, but this is not Pokémon. You can lose your demons in battle, but by another means as well. Demon fusing is back and it is a great way of getting rid of weaker demons in your possession and trying to get new ones that aren’t, who possess greater skills.

Your options will be quite limited nearer to the beginning of your playthrough, but a whole host of fantastical demons and upgrades will become available to you. You will also acquire a large line-up of Miracles which, when put into effect, can have huge repercussions on the world around you and turn the tide in battle. This can swing everything in your favour and make your team an absolute powerhouse, regardless of whose in it. If you have trouble getting to grips with the game’s RPG mechanics, there is a downloadable safety mode that can help to make everything that little bit easier.