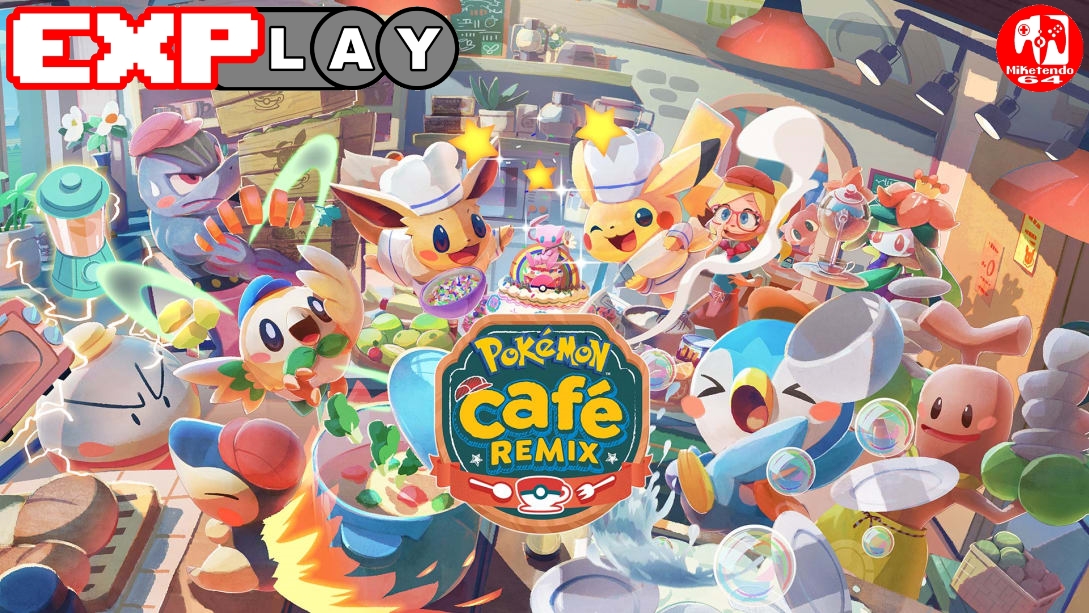 Welcome to EXPlay, (Explain & Play) the review series where we care not for scores but tell it how it is when it comes to every game we get our hands on, whilst also taking the time to include some lengthy gameplay, to give you the reader, the chance to shape your own impressions and views whilst watching and reading. In this instalment, we’re covering Pokémon Café ReMix by developer, Genius Sonority.

When Pokémon Café Mix was first released, it was a Pokémon based puzzler that showed some real promise until suddenly, it didn’t. Instead of new events, support for the game became repeated events that went on for far longer than most players could tolerate, but some hope remained. With the promise of a game-changing update in the works, instead of service ending early, the game endured a seemingly slow death as the developers, Genius Sonority, operated diligently in the background, endeavouring to make sure Pokémon Café Mix would have a future and that future is Pokémon Café ReMix.

Not to be confused as a sequel, Pokémon Café ReMix is a rebranded version of the original game, with many of the original features overhauled in order to give the game the chance of a longer lease at life. It’s still the game for Switch and mobile devices, set in a Café where players, alongside their Staff Pokémon, prepare meals and drinks for any visiting Pokémon, in the hopes of increasing your friendship with them, in order to have them join your staff.

Where things start to differ, however, is the new level-up system that’s in effect for each Staff Pokémon and a new Stamina metre that allows for a maximum of 5 lives and 1 life takes 15 minutes to replenish. Also, now there is a new stamina based item that can be acquired, giving the players 15 minutes of unlimited stamina to complete as many orders as they possibly can. Just in case you would prefer not to do any orders, preferring to train your Staff Pokémon instead, as an attempt to level them up faster when you don’t possess any tasty treats for them, there are now training missions available, which offer more experience based on how much stamina you want to use on a single session. (Maximum number is 3 in a single training session.)

Levelling your Pokémon up should be treated as a priority, especially since this time around, creating new dishes and getting new Pokémon is not based on reaching certain order numbers, but is more based on having all specific Pokémon at the required levels to be given the chance to cook something new and bring new Pokémon to your store. Oh, and you can now earn cookies, which are essential if you wish to raise the level cap for each Pokémon and earn them new colourful uniforms.

These meal based missions play out very similar to the orders in the original game, whereas the brand-new orders, not to be confused with the Extra Orders that are the orders players would have had to complete in Pokémon Café Mix, feature a three-star system. Meeting the initial requirements will earn you one star and see the brand new order completed but, with the moves you have remaining, additional requisites will be available and by meeting all of them within the moves you have left, can earn you a total of three stars for that given mission.

Another way the game has changed is the inclusion of a paid premium pass to earn new goodies, like an exclusive Masquerade outfit for Lucario, and there’s even a new type of event introduced such as Points Events, with the first one helping to add Charizard to Pokémon Café ReMix. Instead of Team Events, where players need to work together to get as many stars as they could to meet each goal, now the player has to do all the work by themself and it’s about earning points instead of stars, but more stars mean more points and that by completing orders for specific Pokémon, can actually earn you even more points.

As for what being on a team actually does in Pokémon Café ReMix, since working together is not an option in Points Events, teams are a great way of cheering each other on in order to receive and request additional stamina. For a list of things where the game is still the same, however, the same puzzle-solving elements are at play, although now special gimmick abilities have been added to make clearing orders easily. Golden Acorns are back, as is every previous item, except now multiple megaphones, can be combined. There’s still a shop for paid content, challenge cards are back and lastly, you can not sync your progression across mobile and Switch versions, despite gameplay and game layout is exactly the same, regardless of what device you’re playing on.

When service ended for Pokémon Shuffle, it was a great shame. It was a fantastic puzzle-based game that brought a lot of joy to all those who played it. Because of this high level of appreciation, reciprocated by many fans, 2020’s Pokémon Café Mix had some big shoes to fill and sadly, it wasn’t up to the task. Even with the all singing and dancing update that is Pokémon Café ReMix, is out now and a major game-changer, this cute café puzzler still falls short of its mark, but it is certainly worth revisiting if the original release put you off, as this appetizing appetizer has never played so good. It’s just crazy though how, even with the big update, Pokémon Café ReMix lacks cross-progression as both the mobile and Switch versions of the game are still separate from one another, yet Pokémon UNITE supports cross-play progression just fine.