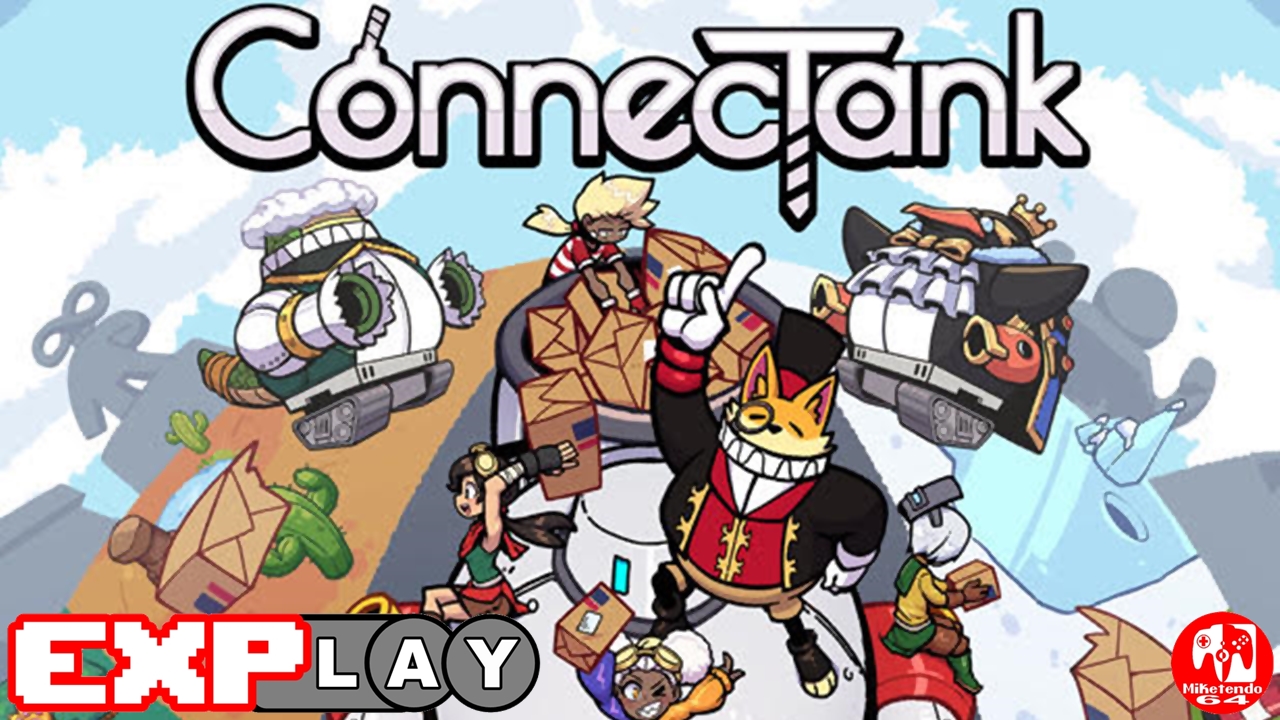 Welcome to EXPlay, (Explain & Play) the review series where we care not for scores but tell it how it is when it comes to every game we get our hands on, whilst also taking the time to include some lengthy gameplay, to give you the reader, the chance to shape your own impressions and views whilst watching and reading. In this installment, we’re covering ConnecTank by developer YummyYummyTummy.

ConnecTank is a 2D action-adventure game that puts you in the shoes of a tank operator tasked with delivering shipments across the continent of New Pangea. You take on contracts from different business moguls and get paid doing it while increasing your reputation with the company.

“What does being a tank operator have to do with delivering shipments?” You may ask. Well, it turns out that it is quite a cutthroat business. As you journey across New Pangea, the roads to your destination are obstructed by a number of brigands, also in tanks, that wish to alleviate you of your cargo. By driving a tank, you have the means to defend yourself and maintain the safety of your cargo.

The gameplay of ConnecTank is divided into two main parts. The first part is moving across a map to reach your destination. The routes on the map will have enemy tanks that will block your way and need to be defeated in order for you to progress. Each map also offers the option to take alternative routes that may lead you to other enemy tanks or perhaps a useful M.O.D that can improve your ammo somewhat (more on ammo and M.O.D’s in a bit).

When you make contact with an enemy tank, you will be taken into the combat portion of the game that takes place inside your tank. From here, you have to set up a conveyor belt that will carry your ammo from the fabrication point to the cannon. But it isn’t quite that simple, as you have to decide what parts of the conveyor belt you need to use and a wrong piece can cause a jam (like the corner pieces which may have the arrows pointing in the opposite way).

Ammo doesn’t automatically generate either. You have to manually create it by picking up pieces of scrap around the tank and combine it by throwing them into the mould. If created successfully, you will be able to fire your desired ammo. If it goes wrong however, it will generate scrap ammo that will do far less damage against your opponent.

The cannon that blasts created ammo has two positions and can be moved using a lever. The reasoning for the two positions is that there are two lanes in which ammo can travel along to reach the opponent. your enemy will use both lanes to fire their ammo as well so you must alternate lanes so you can use your own ammo to stop theirs and eventually get enough past to do damage to the opposing tank. The battle is over when the opposing tank has no HP left.

Of course, to add further challenge in combat, enemies may make it aboard your tank and can cause disruption. They can damage conveyor belt parts and other parts onboard the tank and must be taken out as quickly as possible. If any part is damaged or removed, you will be required to repair them so they can be used efficiently again.

With ConnecTank being a multiplayer game, up to four players can work together and divide the work load. This means that you can coordinate who does what like one player concentrating on the conveyor belt, another can defend the tank itself from intruders, a third can repair any broken parts and the fourth can feed ammo into the mold. The difficulty is slightly adjusted when more players are playing to maintain some level of challenge.

I touched upon M.O.D’s and ammo before so I think I should better explain what they are. M.O.D’s are upgrades that can improve your ammo’s attributes. Some M.O.D’s can make certain types of ammo stronger, faster, or even have improvements to your tank itself. Ammo, as you may have already guessed is what you create and shoot out of your tank’s cannon. These also come in different shapes and sizes and also have colour variants. This is important to know as each tank has a weakness to a particular ammo type and color that can do triple damage if it successfully makes contact with your enemy’s tank.

The three colours are: Red, Yellow, and Blue. Red ammo is effective against Yellow ammo, Yellow ammo is good against Blue ammo, and Blue ammo bests Red ammo. This basically means that if your ammo has a color advantage against an opponent’s ammo, when they come into contact, your ammo will destroy the opponent’s ammo and continue to fly towards its target, albeit slightly weaker.

When you defeat enemy tanks and complete contracts in ConnecTank, you will earn gold that you can use to fund ammo and M.O.D projects in the GoTankMe section of the game. Funding these projects will allow you to acquire and purchase M.O.D’s and ammo whilst on contracts, either by coming across a merchant or by defeating enemy tanks. Using these upgrades is only temporary and you will have to acquire them again every time on a new contract.

As regards to customization options, they are rather limited. You begin with only one tank and you can’t chop and change parts. However, you can acquire other tanks by defeating them and collecting parts. You will need to defeat each tank five times in order to collect all five parts. Once done though, you will be able to select any acquired tank to play with. There are around 70 tanks in ConnecTank so trying to get every single one will certainly take a while.

ConnecTank is a game that is decribed as “Co-operative Chaos” by its developers. It is somewhat aking to the likes of Overcooked and requires players to work together while under the duress of the chaos that surrounds them. At first glance, ConnecTank may not seem like much but it actually has quite an interesting combat system and is quite a blast to play with friends.