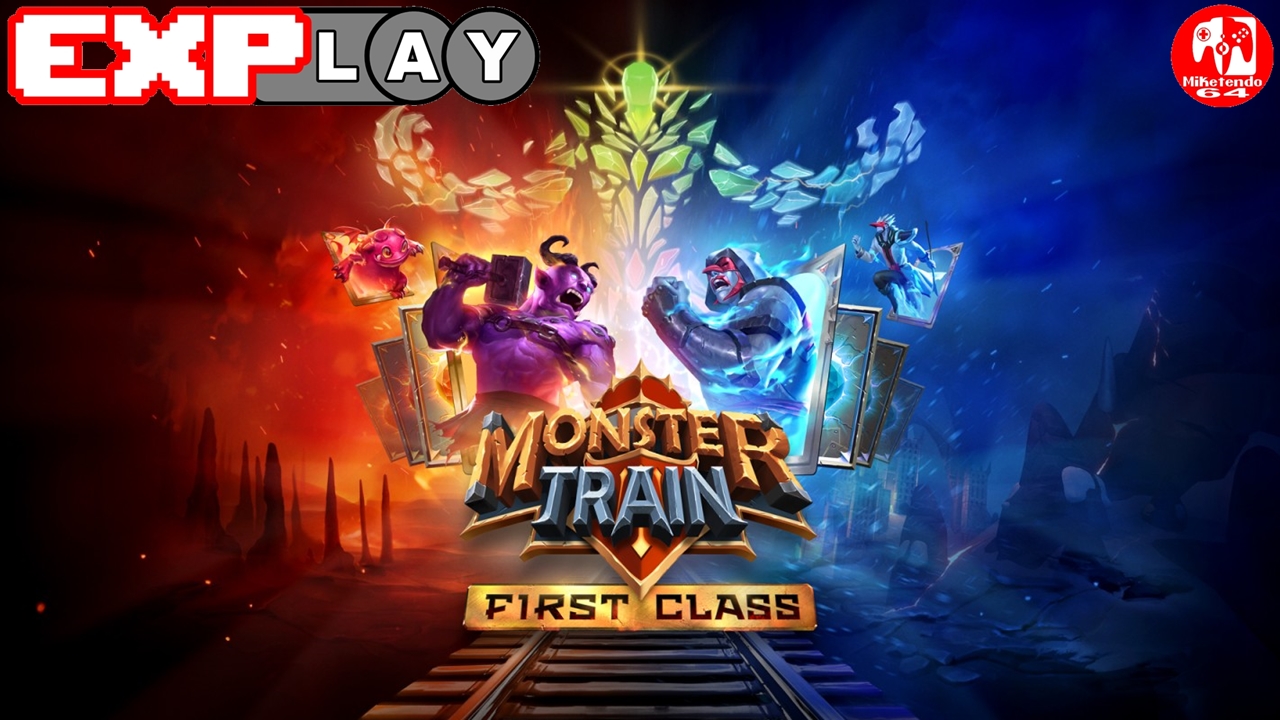 Welcome to EXPlay, (Explain & Play) the review series where we care not for scores but tell it how it is when it comes to every game we get our hands on, whilst also taking the time to include some lengthy gameplay, to give you the reader, the chance to shape your own impressions and views whilst watching and reading. In this installment, we’re covering Monster Train First Class by developer Shiny Shoe Games.

If a rogue-like, deck-builder, tower defense game somehow could make a baby, that baby would be Monster Train First Class. The main story of the game is that Hell has frozen over and the last burning Pyre needs protection from the angelic horde of Heaven. As you play through your runs in Monster Train First Class you will begin to build a deck of cards full of horrific hellions.

Monster Train First Class throws you right into its procedurally-generated world where you make your way across forking paths of tracks towards the end. Within each section of the underworld you will come across merchants, create special cards from the choices you make, and rearrange your deck for the battles ahead. Before moving forward through the world you will enter a battle which takes place across four floors of a train, where the top floor contains the sacred pyre.

Each fight throws a random array of Heaven’s fighters and heroes against your horde. Your cards allow you to place fighters on the field, cast spells to hurt enemies or heal your army, and many more. The designs of your beasts and the game play loop of building the perfect deck and reaching the end is a huge draw of Monster Train.

Your fighters and pyre have a set amount of health points. Each turn can wear down your team, but each turn you have the ability to place your army or cast spells if you have enough ember points, which are Monster Train’s mana points. The main strategy in the game requires you to smartly place your army members among the three floors so that their attacks wear down your foes before they reach the top level and destroy your pyre.

In between each battle you will choose your path, as mentioned before. One thing that I found unique were small sidequest you would come across NPCs that would provide you with a card item or artifact based on the dialogue choices you make. At one point I gained a special hammer that would allow for two consecutive attacks, another time I gained a card that would cause spike damage. The upgraded cards you find may help turn the tide of war since your cards appear randomly from your selectable cards during each turn.

If you complete a run or more likely, die before the end, you can start over again. The knowledge you gain from playing through each run begins to level up your heroes you have access to. There are also points within each run where you can spend gold to upgrade your cards and boost stats.

Monster Train First Class has a lot of game play hours to be had, especially if you are desiring a rogue-like card builder. The game is pretty polished and has a variety of ways that you can play through it. Your strategy will vary run to run, though the knowledge you gain each time will help as you progress through harder battles that have tougher Heavenly bosses that will also need to be brought down. Because of the randomness, there are times where you may find yourself losing quicker than others, just based on the rogue-like nature.