Mario Kart Tour sets to Divide the Fan Base with Mario vs. Peach 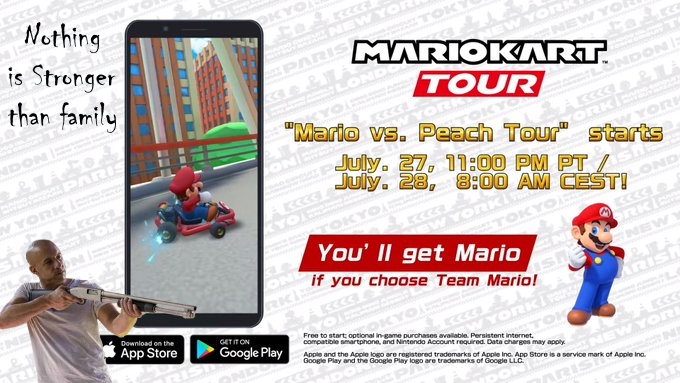 Plenty of love was lost between these two.

Just when you think you’ve seen it all. The Battle of the Bros, (Mario vs. Luigi) The Feuding Princesses (Peach vs. Daisy) or even just Godzilla vs. Kong, by which I mean Bowzilla, aka Bowser vs. Donkey Kong, once more Mario Kart Tour desires to cause a rift in the Mushroom Kingdom.

When all is said and done for the current Los Angeles, the next tour on the agenda for the mobile app is none other than the Mario vs. Peach Tour. In a battle of plumber versus princess, short dark and handsome versus pretty in pink, the two iconic characters are surely going to split the fanbase when players are forced to choose.

What’s even more controversial about this new tour, is while it seems Daisy and Peach have made back up, with Daisy joining Team Peach, clearly, Luigi has only ever watched Fast and Furious 9, as he is turning his back on his own family and joining King “Dwayne Johnson” Bowser, in siding with Peach. Honestly, this new tour is looking a lot like the plot to The Fate of the Furious, with Mario starring as a hat-wearing, moustache sporting Domonic Toretto, working in partnership with Cipher, aka Pauline.

For a look at the full team line-up, be sure to check out the following videos:

When the time comes, which team are you siding with?