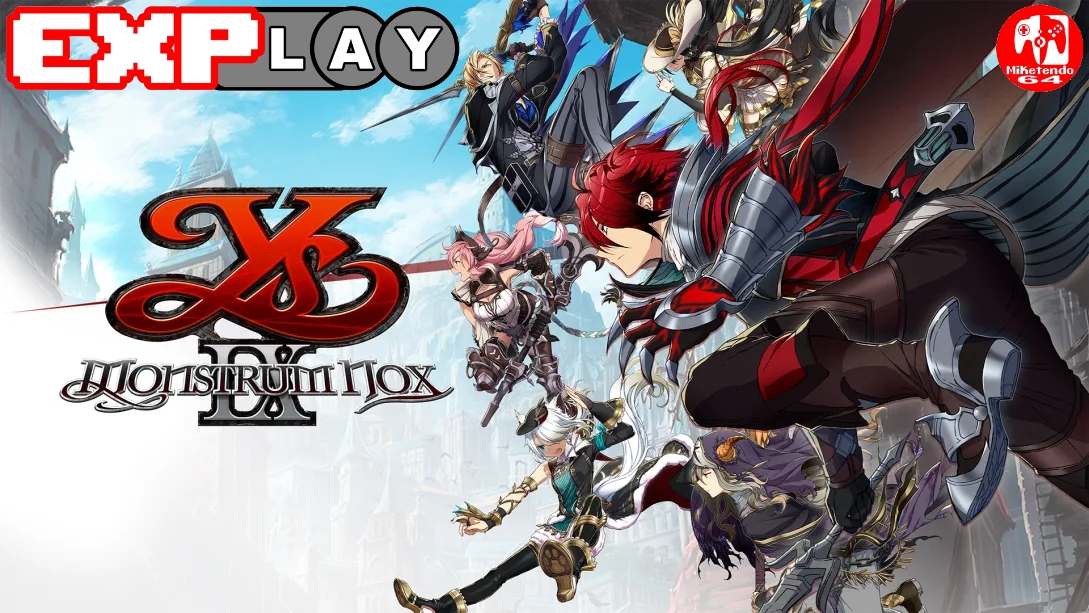 Welcome to EXPlay, (Explain & Play) the review series where we care not for scores but tell it how it is when it comes to every game we get our hands on, whilst also taking the time to include some lengthy gameplay, to give you the reader, the chance to shape your own impressions and views whilst watching and reading. In this instalment, we’re covering Ys IX: Monstrum Nox by developer Nihon Falcom and Engine Software, who handled the port.

Picture if you will, a handsome swordsman, a young man of a few words who has embarked on many adventures? Are you picturing him? Can you see him in your head and does he have red hair, not to be confused with pink? If you answered yes, congratulations, you have clearly heard of the wonderful series of Ys and its protagonist, Adol Christin. Having first graced the Nintendo Switch with his presence in Ys VIII: Lacrimosa of Dana, back in 2018, Adol is back for another adventure and this time it’s the newest outing in the series with Ys IX: Monstrum Nox.

First known as Project N.O.X, Ys IX: Monstrum Nox was first revealed in 2018 and followed up by a 2019 release on the PlayStation 4. It sure took its time making its way to the Switch, but for what it’s worth, the wait does seem to have been worth it. Following in the footsteps of the game that can before it and its arc, Ys IX: Monstrum Nox is an action, adventure RPG that takes the movement and direction utilised in Lacrimosa of Dana and greatly expands upon it.

Whereas the previous game offered hook shoots and air dashes, Monstrum Nox provides players with special abilities called Monstrum Gifts that allow the game’s characters to engage in special actions for traversing locations, which in Adol’s case, is essentially a hook shot, as the Crimson Line allows him to warp to specific locations, but it can also be used in battle, dealing damage to enemies and pulling Adol closer to targeted foes.

In terms of story placement, however, chronologically Ys IX: Monstrum Nox is Adol’s latest adventure, but after many quests and now at 24 years old, his past has caught up with him. Upon his arrival in Balduq, he is immediately identified and incarcerated. Far too many things have happened for the Romun Empire to just ignore all the unanswered questions. Only, Adol has no desire to be left to rot in a cell, so naturally, he seeks to escape, only for things to become much worse.

With prison guards hot on his heels, Adol is quick to meet Aprilis, a mysterious woman who swiftly shoots him, placing upon him a curse that turns him into a Monstrum, a being who must exorcise monsters, whilst being blessed with abilities. Only, just because he is successful in escaping the prison, Adol’s time in Balduq is far from over as the curse leaves him unable to leave the prison city and there are other Monstrums he must ally himself with, should he wish to break free from his curse, discover hidden truths and do battle in the shadowy dimension that is the Grimwald Nox, against vile and vicious threats.

Graphically, Ys IX: Monstrum Nox is very similar to Lacrimosa of Dana, using the same kind of art style, but this time boasting better performance that feels more natural but is not totally without its own faults as there are a few sluggish moments here and there, but at least the game still maintains multiple characters for players to switch between, with each one having their own skillsets and uses that warrant playing with each and every one of them. Additionally, combat is still real-time, allowing Adol and his newfound companions the chance to take on their enemies as a team, whilst using their unique skill attacks.

In keeping with RPG tradition, in terms of content, there is plenty to see and do, easily keeping players occupied for more than 30 hours if they wish to complete everything, thanks to side quests and events, special collaborators that players can meet and enlist for their assistance, but then there’s also collectable Azure Petals and graffiti and a fantastic soundtrack to listen to.

Storywise and game settings, Monstrum Nox and Lacrimosa of Dana couldn’t be any further apart, but in terms of gameplay, aesthetics and depth, the two games are the one and the same and thankfully, where some fans felt NIS America could have done more with the Switch port of Lacrimosa of Dana, the good news is the publisher has done plenty right by this release and so did the game’s developers, both Nihon Falcom and Engine Software who handled the port.

It’s great to see Ys continue to evolve with every new instalment and become more attractive to newcomers. Adol has spent far too long being a lesser-known protagonist and unlike Link in The Legend of Zelda, it’s always the same Adol having the adventure and I look forward to the next one. Ys X can not come fast enough.