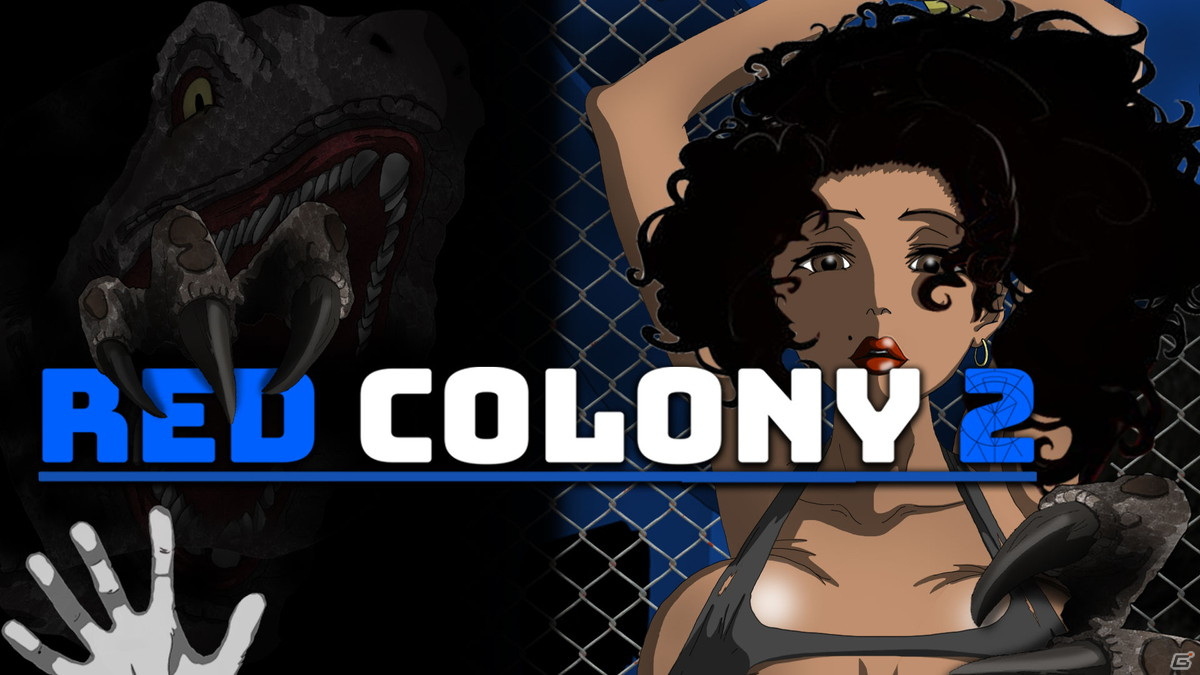 With 2D Ecchi Horror Drama game Red Colony 2 officially releasing on Nintendo Switch on July 15th, 2021, we spoke with the game’s developer Rune Shimotsuji Storm of RunicCodes to talk all about the game. In this interview, we discuss where the game takes place following the events of the first Red Colony game, the choice of art direction, the possibility of making the series a trilogy and if it could ever see a physical release.

Miketendo64: A nice easy question to start with. Please introduce yourself and talk a little bit about what you do?

Rune: My name is Rune Shimotsuji Storm, born and raised in Sweden. I moved to Japan in my mid-twenties where I worked as a model/actor for 8 years-ish. Recently, my wife (who I met in Japan) and I, moved back to Sweden, where I started my game studio RunicCodes. I develop indie games, work out and spend all my free time with my son and wife. I’ve had no time for gaming for the last 2 years but hope to squeeze some gaming into my life as soon as my son is a bit older. I miss gaming!

Miketendo64: I’m sure some people already know but for those who don’t, could you explain what Red Colony 2 is about?

Rune: Red Colony 2 is a game about a sex worker, Nicole, who has been told by her government to sneak over to the neighboring colony and release a deadly zombie virus. If she doesn’t obey the government’s orders, they will have her daughter killed.

Miketendo64: Where does the inspiration of Red Colony 2 come from?

Rune: The obvious one is Resident Evil. However, I was also inspired by over-the-top-tv-drama shows that my wife enjoyed watching (The Bachelor, etc). I was also inspired by some of my favorite anime, like Highschool of The Dead but also a Japanese book called Kafka on the Shore. I’ve never read the book, but someone once summed it up as “A book about a random person, living a normal life”.

This stuck with me and I wanted to explore this in RC1 and RC2 where the main protagonists are random women, living – from their own personal views – normal lives, until shit hit the fan. Maria in RC1 is a successful scientist in a communist colony – Nicole in RC2 is a low-life, hard-working sex worker in a capitalist colony. Their professions, standards of living, political views, and personalities could not be further apart, yet, they both end up in impossible situations where none of the social norms matters, all they gotta do is survive.

Miketendo64: Now, Red Colony was released on Nintendo Switch earlier this year and we already have a highly anticipated sequel on the way. When did development start on Red Colony 2? Was it before or after the Switch release of the first game?

Rune: It’s important to know that; By the time a game is done until it’s actually out in stores, can vary from 4-12 weeks because of all the “paperwork” aka age-rating-stuff, licensing, game-testing, Eshop-info, trailers, back-and-forth with platform holders, etc, etc (This is the worst part of game development btw). So in order to keep myself sane, I started writing Red Colony 2’s Story in November 2020 and spent the next few months reprogramming the dialogue system so the game could support Voice Acting. The first story draft and most of the levels were already done by the time RC1 finally hit the stores.

Miketendo64: Was Red Colony 2 easier to develop than the first game?

Rune: Yes and No. The dialogue system in RC2 had to be re-made from scratch so it could support VA – that was hard! However, thanks to feedback from the RC1 community, I had to spend some time on a patch that fixed some of the major bugs that we missed during playtesting, and that patched version of RC1 became the base code for RC2, which made it a great jumping off point and easier to develop.

Even though I want the player to feel familiar with the sequel, I added a bunch of new mechanics and elements that add, hopefully, value to the experience. It could also play into the story since The Blue Colony is a wealthy capitalist colony, so naturally, there are some minor everyday life improvements in the game as well.

Miketendo64: Let’s talk about the art direction for Red Colony 1 & 2. Why did you choose this particular art style? What was the inspiration behind it?

Rune: I wanted to make it look like an anime, in 2D… Easier said than done… So this is the closest I could get. I also wanted an art style that (hopefully) ages well. Say what you want about the art in Red Colony, but I think they will look just as appealing/off-putting 10 years from now as they do today. It’s not quite like pixel art graphics, which always look great, but it’s something…

Miketendo64: There is an interesting mechanic in the games where the protagonists’ clothes get more and more torn as they take damage and lose health. What made you choose this mechanic as opposed to a typical health bar or another type of health display?

Rune: This was a function I wanted in my previous game, KnifeBoy, but didn’t have the skills to pull it off, so the idea sat on the back burner until later. Also, I always thought It was weird that main protagonists almost never turn into zombies after getting bitten in games. When I started brainstorming ideas for Red Colony and the story came together, the idea re-occurred to me and it made perfect sense to have it this way. – In other words: The zombies will grab the player by the clothes and each time a part of the clothes will tear off. Eventually, there are no clothes left to hold on to, at that point, the zombies can grab her by the skin and lean in for a bite…

Miketendo64: Can you talk about the length of Red Colony 2? The first game was really engaging but quite short and left players wanting more. Will the sequel be longer in terms of gameplay?

Rune: Yes, the second game is longer. But I’m not sure how much longer. There is also some replay value in terms of unlockable skins and an alternative ending.

Miketendo64: The first game was puzzle-focused and gave players limited resources that they could use to craft weapons and bullets. Will there be any adjustments to these mechanics in Red Colony 2 and in what way? (Will there be more puzzles, more complex puzzles, will ammo be easier to find/ craft now that players will face off against dinosaurs as well?)

Rune: Hmm… I think the number of puzzles is about the same with some optional ones that are harder to crack. In RC2, the indestructible knife will be replaced with a breakable baseball bat (That’s right colonists! I saw how you fools refused to use the guns and kept stabbing every enemy to death with that bloody knife! Good luck with that coward-technique in RC2! Moahhaah!) so the game might be a bit more challenging, but it’s hard to tell.

Since I’m a solo dev and did most of the balancing on my own – (I think the game is super easy since I’ve played it a million times)- but I did have help from a few brave colonists that gave some feedback that I used to balance it more. You can also WASTE some of your resources on unnecessary skins that your greedy capitalist brain just wants for the sake of wanting, but it will come back and haunt you later… Maybe…

Rune: Yes, it will! Some are obvious and others are more subtle. There is one in particular that I hope will crack a smile on many players’ faces!

Miketendo64: We heard that there is potential for the series to become a trilogy. That would be amazing if so. What would it take to make it happen?

Rune: It’s gonna happen no matter what! I’m already working on the third game and it’s a necessary game to bring closure to the entire saga and fulfill my personal goal with this project. I absolutely love making these B-movie-ish games and nothing could stop me from keeping making them as long as players enjoy them. It’s an absolute delight! I’m also super excited/anxious to see how the players react with the direction the games will take in RC2 and RC3.

Miketendo64: With both Red Colony 1 & 2 being available digitally on Nintendo Switch, is there a possibility of them being available physically as well? Perhaps bundled together?

Rune: I would love that more than anything else! I have already printed out fake covers for both RC1 and RC2 and replaced some of my Mario games with them, to make them look real. I’m a big fan of physical games but being a solo-dev + a father is a lot of work, (as I mentioned before, I don’t have time to play games anymore) so making a physical release sounds like an overwhelming amount of work. It’s probably easier said than done when it comes to physical releases but it’s definitely something I want to look into once the saga is done.

It would be awesome to have the entire trilogy bundled on one cartridge with a cool poster. But how does that work from a programming point of view? Can I install three separate games on one cartridge? Will that affect the save/load function since all three games will be using the same function? Do I have to program a menu where the player can select what game he/she wants to play? So many questions and I have no clue…

Miketendo64: As we wrap up this interview, would you like to say anything to your fans and our readers?

Rune: To all of you who played RC1 and are looking forward to RC2 – thank you sooooo much for your support and feedback! It’s a pure joy to make these games (apart from the finale when it has to go through all the shenanigans) and I’m so thankful to all of you who made it possible for me to keep making these games.

Even though the development cycles are short, in between the games I try really hard to implement suggestions from the Red Colony community into the games (if I’m capable of doing it). Trust me, some of the suggestions from RC1 were really great but didn’t make it to RC2 due to my lack of skills. But as long as I can keep making games my skills will improve and I hope to implement some of the great suggestions moving forward.

To any readers who are yet to play any Red Colony game, thanks for reading this far and I hope you join the Colony in the future! Red Colony 2 can be played as a prequel or sequel to Red Colony 1 so don’t feel pressure if you didn’t play RC1, and come and join us in this 2D Ecchi Horror Drama Indie Game – Only On Switch – The gates stand wide open to newcomers and we hope you’ll enjoy your stay.

Miketendo64: Lastly, where can people learn more about Red Colony 2?

Rune: Adam has written fantastic blogs about each character from both RC1 and RC2 on our website and lore about each Colony.

You can also get info over at: