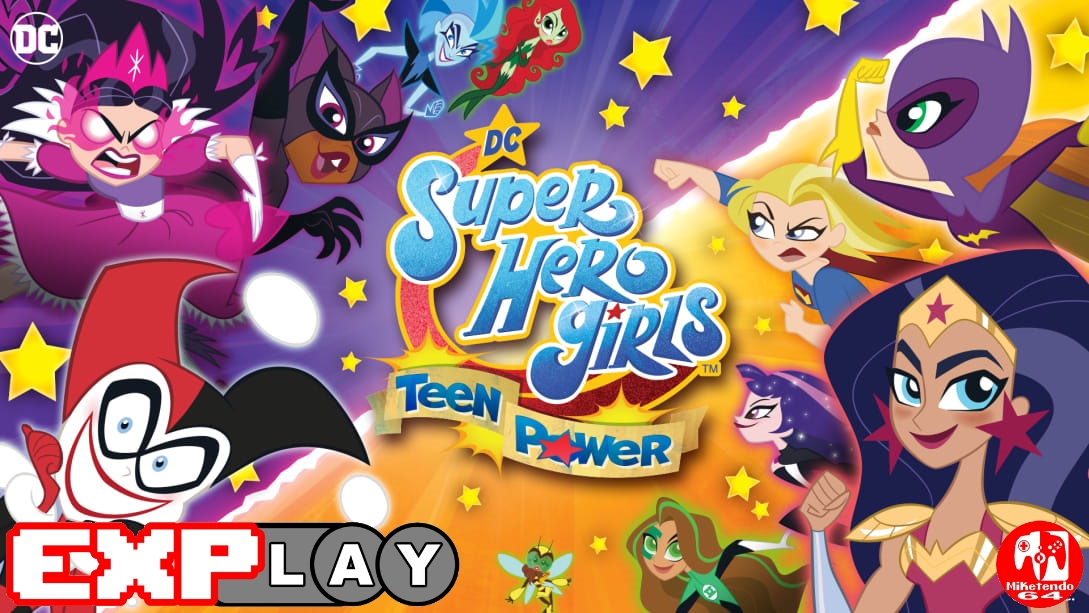 Welcome to EXPlay, (Explain & Play) the review series where we care not for scores but tell it how it is when it comes to every game we get our hands on, whilst also taking the time to include some lengthy gameplay, to give you the reader, the chance to shape your own impressions and views whilst watching and reading. In this instalment, we’re covering DC Super Hero Girls: Teen Power by developer TOYBOX inc.

Nintendo is by no means strangers to publishing licenced games. It’s something the company has done for decades and with some luck, will hopefully continue to do so for decades more to come. Only this time, their latest release sees them working with another iconic comic book series as they swap Marvel (2019‘s MARVEL ULTIMATE ALLIANCE 3: The Black Order) for DC (2021’s DC Super Hero Girls: Teen Power).

As its name implies, DC Super Hero Girls: Teen Power is based upon the DC Super Hero Girls TV series, which sees the likes of the everyday alter egos of Batgirl, Wonder Woman, Bumblebee, Catwoman, Harley Quinn, Super Girl and Poison Ivy, all attending Metropolis High School. Only, this isn’t the first video game adaptation as 2020 saw the release of a mobile game called DC Super Hero Girls Blitz, a collection of microgames that increase in difficulty. It is, however, the first game made for consoles, which just so happens to be exclusive to the Nintendo Switch.

So, let’s talk DC Super Hero Girls: Teen Power. Whilst being similar to the show in the sense that our teen super heroes must juggle their social life, school life and super hero responsibilities, thankfully, the majority of the school part isn’t forced on the player, allowing the majority of gameplay to consist of two parts, exploration and action. During missions, players can take control of their characters in their super hero outfits and do battle against minions and classic DC villains, whereas, with the non-heroic parts, players can explore the game’s take on Metropolis, go shopping, fund the construction of new buildings in Hob Bay and complete all kinds of sub-missions that range from taking photos of graffiti, recovering lost objects or just taking photos.

This is a quality of the game that I liked a lot during my time with it, even for a game intended to appeal to a younger crowd, there’s always something to do should you wish to put off completing the game’s main story and completing all of its chapters as fast as possible. Even if you’re just settling for taking photos of everything you see, including yourself thanks to selfies, and trying to build yourself a massive following on the social media app Superstapost.

Popular photos can receive hundreds of likes and comments, even on a small follower count, but as soon as the follower count is over 1,000, the comments and likes soon become never-ending. It’s just a shame that this great feature, is something that needs to be worked on with every character as players will need to build a social media presence for each one of the game’s heroes and you will have to put some time into the game, should you wish to obtain the right to swap between them at will.

In terms of graphics, the game closely follows the show’s graphics, which is a lovely touch, but did you know the text utilised in the game is the same text as seen in The Legend of Zelda: The Wind Waker? What’s more, this wholesome little game actually looks quite rich in its quality, even when some of the game’s locations look a little bland and empty? Additionally, performance is actually rather solid and while the game’s soundtrack can prove a little too repetitive at times, especially when exploring the game’s city, at the very least, cast members from the actual show, have lent their voices to the game, which is always a neat touch.

Something that DC Super Hero Girls: Teen Power does do that adds some depth to it, however, is the inclusion of a rating system so after every completed battle, players will be ranked on their performance and earn rewards based on how well they did, which can also include skill points that can go a long way to improving the abilities of your favourite heroes. Who you choose to favour and when is entirely up to you, just keep in mind there are many missions where you don’t have to go it alone, so if you level everyone equally, your AI controlled allies can become lifesavers. It’s just a huge shame a local co-op mode isn’t supported. (Talk about a missed opportunity.)

There certainly are a few cons that might put off older players considering giving this game a go, especially those who dislike repetitive music, very repetitive sub-missions where NPCs keep asking you for the same thing over and over again and poor camera angles, but it’s a licenced game that remains true to its source material and could have been a whole lot worse. Plus, the Superstapost feature is actually quite fun.