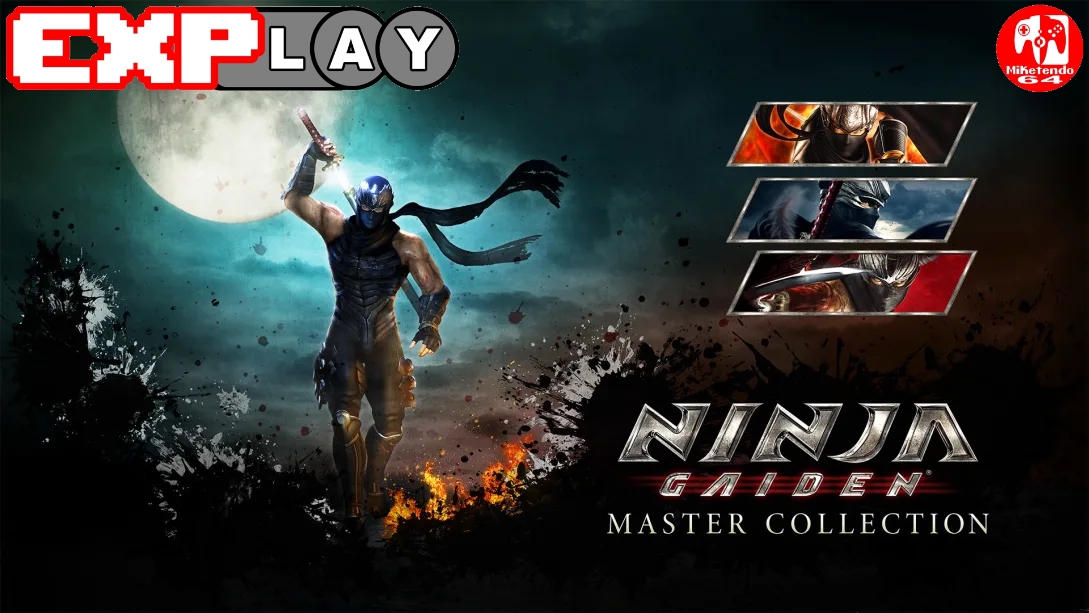 Welcome to EXPlay, (Explain & Play) the review series where we care not for scores but tell it how it is when it comes to every game we get our hands on, whilst also taking the time to include some lengthy gameplay, to give you the reader, the chance to shape your own impressions and views whilst watching and reading. In this instalment, we’re covering the NINJA GAIDEN Master Collection by developer Team Ninja.

It’s time to welcome back the world’s favourite ninja as once again, Koei Tecmo is keen to remind us that good things come in threes as their latest release is none other than the welcome remaster of NINJA GAIDEN Master Collection. Whilst nameless during his debut arcade game, 1988 would introduce Ryu Hayabusa to the world, a young ninja on the hunt for his missing father and tasked with saving the world, and he’s been doing it ever since.

Only, gone are the days of his old 8-bit adventures, as Ryu’s more recent outings, often involve high definition 3D graphics that capture the essence of NINJA GAIDEN perfectly and now, three games, in particular, have been on the receiving end of some performance and graphical improvements and they look glorious.

Making up the NINJA GAIDEN Master Collection, are none other than 2007’s NINJA GAIDEN Σ (Sigma), 2009’s NINJA GAIDEN Σ2 (Sigma 2) and 2012’s NINJA GAIDEN 3: Razor’s Edge, which is not to be interpreted as a third instalment of the Sigma games, but the sequel to 2008’s hack and slash NINJA GAIDEN II. Because of this fact, players can feel welcome to dive straight into the third game of the collection or experience the Sigma titles first.

However, should games not be enough for you, players can opt to get the NINJA GAIDEN Master Collection Deluxe Edition, which consists of all three games, in addition to a separate download consisting of a soundtrack for all three games available as part of the collection, and digital art books. There are some drawbacks to the collection, however, as while the remastered titles look all the more impressive than they once did, had they have been complete remakes, new features could have been added, instead, eager fans are left with a collection where it’s developers had no choice but to omit certain features.

For example, the Tag Missions feature in NINJA GAIDEN Σ2, lack online multiplayer. The Ninja Trials mode is also without online functionality and the “Shadow of the world” Clan Battle, as seen in NINJA GAIDEN 3: Razer’s Edge, hasn’t been included either. This is an annoying factor to be sure, especially when you consider the fact that this collection features “most” of the additional content that was released for these titles, but then when you remember the price tag and the quantity and quality of the content you do get, it’s hard to hold a grudge.

With multiple game modes and three very different storylines to follow, plenty of combat, conquest and gruesome takedowns await in what is a very hack and slash style of action gameplay with NINJA GAIDEN Σ first setting the scene and then NINJA GAIDEN 3: Razer’s Edge really bringing it home by perfecting previously used features, combos and upgrade systems.

The developers have done a wonderful job with capturing the essence of the ninja and showcasing them via Ryu’s movements, only he isn’t the only playable character, as players will also get the chance to go hands-on with the likes of Ayane, Rachel, Momiji, and Kasumi. Each one has a variety of different costumes, which once selected, will be the outfits depicted when your chosen character is present in the game’s impressive cut-scenes. It’s really quite impressive how cinematic many of the scenes are, even in the earlier NINJA GAIDEN Σ.

Despite the fact NINJA GAIDEN Master Collection has a day one update that feels mandatory should you wish to get the most out of the game, including brutality, there is no denying it is a formidable gathering of games. One that can even put Nintendo’s own Super Mario 3D All-Stars to shame. Consisting of some of Ryu’s greatest adventures to date, fantastic previously released additional content and all at a price not to be passed out, now is just as good as any time to pick up the Dragon Sword and learn the ways of the ninja. Only you can take Ryu Hayabusa’s hand and fight evil through him and his friends.