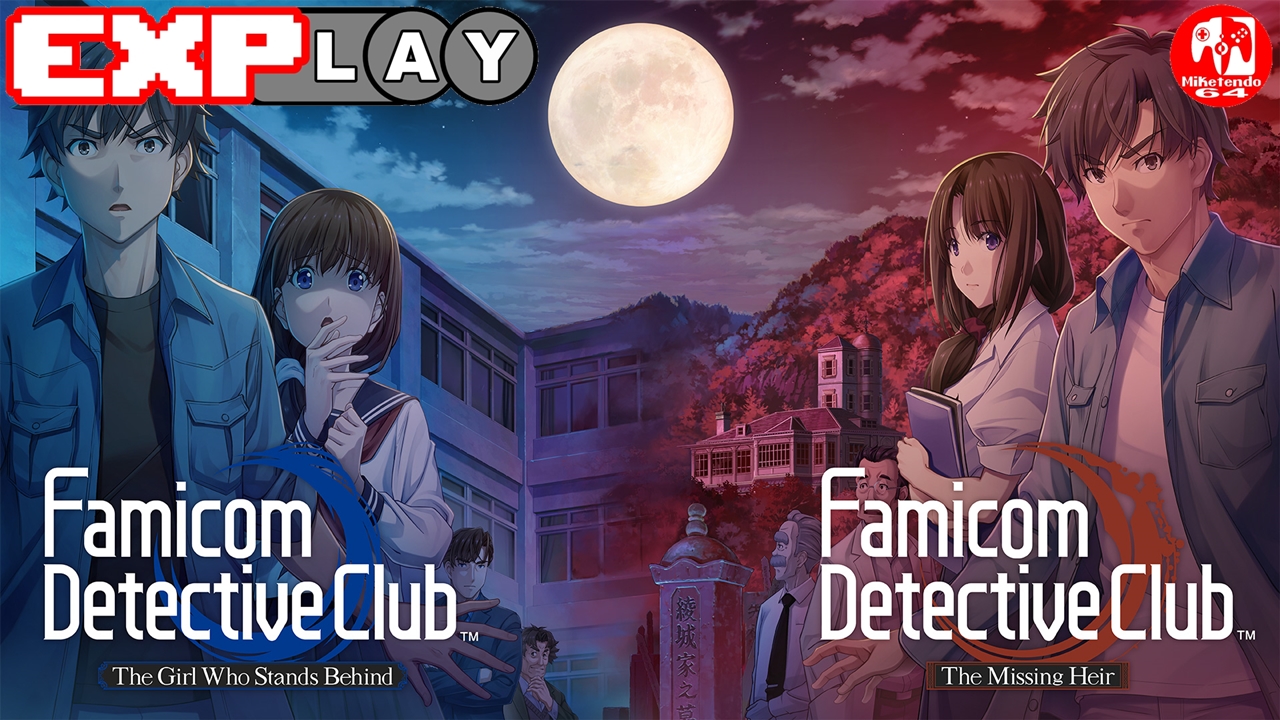 Welcome to EXPlay, (Explain & Play) the review series where we care not for scores but tell it how it is when it comes to every game we get our hands on, whilst also taking the time to include some lengthy gameplay, to give you the reader, the chance to shape your own impressions and views whilst watching and reading. In this instalment, we’re covering Famicom Detective Club: The Two-Case Collection by developer Nintendo R&D1.

Famicom Detective Club is a series of visual novels that originally released on the Famicom Disk System in Japan back in 1988 and 1989. There were two entries in the series that follows a young detective’s assistant who works for the Utsugi Detective Agency.

The first entry in the series is Famicom Detective Club: The Missing Heir. You play an unnamed protagonist who works as a detective’s assistant. After awakening at the bottom of a cliff and experiencing amnesia, you must retrace your steps to remember who you are and what you were investigating. To help you on the case and remember who you are is Ayumi Tachibana, a young woman who works alongside you at the Utsugi Detective Agency.

The second entry is Famicom Detective Club: The Girl Who Stands Behind. In this game, you play as the same protagonist from FDC: The Missing Heir but this game is actually a prequel, taking place before the events of The Missing Heir. The Girl Who Stands Behind follows the protagonist as he investigates the murder of a teenage girl. The girl’s death seems to be linked to a mysterious rumor about a ghost in her school.

Both games have been faithfully remastered for the Nintendo Switch with modern visuals and Japanese voice acting. It is also the first time that the series has been available outside of Japan and includes English text. The Background audio sound effects have also been modernly arranged but you can also choose the original audio in the settings menu if you want the more retro or authentic experience.

Though the two games have their own individual storylines, they both have the same style of gameplay. The player is tasked with asking other characters questions on certain topics. As you interview characters, you can open up new lines of questioning to find out more information that could be beneficial to your investigation.

As you interview characters, you can also examine the backdrop that may hide clues that could potentially help in your investigation as well. You can sometimes call upon other characters to interview them and take a moment to think on what you have learned. When the conversation with a particular character has reached its end, you may be prompted to talk with someone else or travel to another area.

One thing I will point out is that it during interviews, it isn’t always clear how you should proceed with your line of questioning. Sometimes you will get prompts that will appear in yellow and often times, you can be completely clueless with how to progress the conversation further. You will eventually end up spamming every option until you find the key that triggers the next line of question and moves the story forward.

If you need to recap or go over anything that you have learned, you can access your notebook from the main menu (press + to bring up the main menu). From your note book, you can go over statements and facts that you have picked up during your investigation. Towards the end of each chapter, you will return to the Utsugi Detective Agency and will be able to speculate on everything that you have learned so far. This serves to summarize the plotline so far of each chapter.

For both games, you have three save slots available that you can save your game to manually. There is also an autosave function that periodically records your current progress. It is actually a strange set-up as you have to choose “Quit Investigation” in order to save your game. However, you can’t actually quit your investigation from this option. Instead, you can only quit to title screen by pressing the + button first and choosing “Return to Title Screen”. It is a lengthy work around that does seem unnecessary.

The stories in both Famicom Detective Club games are really good and the mystery keeps you motivated from start to finish. While you can purchase each game separately, if you are a fan of visual novels, you will most likely pick up both of these really great games.