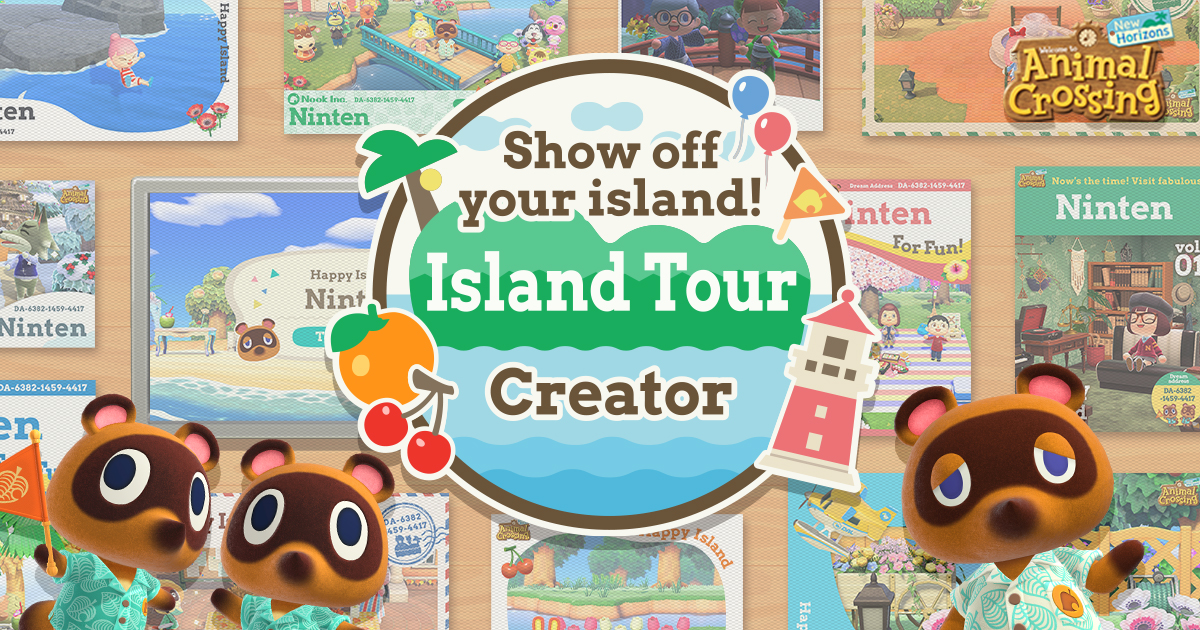 Nintendo has announced that a big update is on the way for Animal Crossing: New Horizons. Available to download on March 18th, players will be able to use the Sanrio Collaboration amiibo cards to invite special Sanrio characters to their island. Not only that but players can also get their hands on new Pro custom design templates as well as an expansion on their custom and pro design storage by purchasing them on the Nook Terminal. That isn’t all though as to mark the 1 year anniversary of Animal Crossing: New Horizons, Nintendo will be sending all players a 1-year anniversary cake in-game item.

You would think that it is all but NOOOOOO! we have saved the best till last as Nintendo will also be starting up the Animal Crossing: New Horizons Island Tour Creator site! Come March 26th, Players will be able to share their screenshots and their videos that they have captured in ACNH to their Smart Devices and then upload them to the Tour Creator site. They can then create their very own “Digital Posters and Special Tour Videos” to promote their island on Social Media!

We have the full details on each new feature coming in the update as shown on the Nintendo UK website below.

Sanrio-themed residents and items are here!

Just ahead of the Animal Crossing Sanrio Collaboration Pack amiibo cards (sold separately) being re-released at the end of March, a range of Sanrio-themed items and residents will be available from March 18th.

By using the six amiibo cards included in the Animal Crossing Sanrio Collaboration Pack, you can invite special residents to your campsite and even have them move in! Buy furniture themed after famous Sanrio characters like Hello Kitty, Cinnamoroll and Pompompurin, and add all kinds of cuteness to your island.

If you already own the Animal Crossing Sanrio Collaboration Pack amiibo cards, you can access this content after downloading the latest update*.

The Custom Design app on your NookPhone is getting not one, but two upgrades! Once you’ve downloaded the latest update*, you can pick them both up from the Nook Stop in Resident Services.

Pick up the Custom Design Pro Editor+ upgrade and you’ll expand the options available to you. Take advantage of four new Pro Design styles, as well as 100 additional slots to store your creations in (50 Custom Designs and 50 Pro Designs). Scratch that creative itch!

You can also add the Custom Designs Portal found in the Able Sisters store directly to your Custom Design app. Access it from anywhere on your island** and take advantage of over 12 million Custom Designs uploaded so far, or even upload your own!

Players who download the latest update* will receive the First-Anniversary Cake in their in-game mailbox as a thank-you gift from Nook Inc. It’s the first anniversary of Animal Crossing: New Horizons coming to Nintendo Switch on March 20th…now, who wants cake?

The advent of spring brings its own special times to enjoy, and you can find a variety of time-limited items at Nook Shopping and Able Sisters to do it with.

On top of the Nook Inc. Silk Rug that is available as an exclusive item from Nook Shopping, Nintendo Switch Online members will also be able to order a Nintendo Switch Lite as an in-game item after the latest update*. It comes in four different colours, so pick your favourite when it pops up in Nook Shopping to order!**

A special someone is planning a visit to your island soon – it’s Zipper! Starting on March 28th, you can find hidden eggs all over your island. Collect them to use as materials for DIY recipes, then trade more of them with Zipper during Bunny Day on April 4th for more rewards. Unique Bunny Day items will also be on sale in Nook’s Cranny.

NookLink within the Nintendo Switch Online smart device app is getting an upgrade in late March. Once updated, you’ll be able to save up Nook Points and trade them for in-game items. Use it daily and reap the rewards!

A new way to share your island with the world is on the way! The Animal Crossing: New Horizons Island Tour Creator launches on March 24th, providing a special service that allows Deserted Island Getaway Package owners to really show off their new home.

Transfer screenshots and videos of Animal Crossing: New Horizons captured on your Nintendo Switch console to your smart device, then upload them to the Island Tour Creator site. You can then create digital posters and special tour videos that highlight all the best things about your island. Download and share these creations to social media to spread the word far and wide!