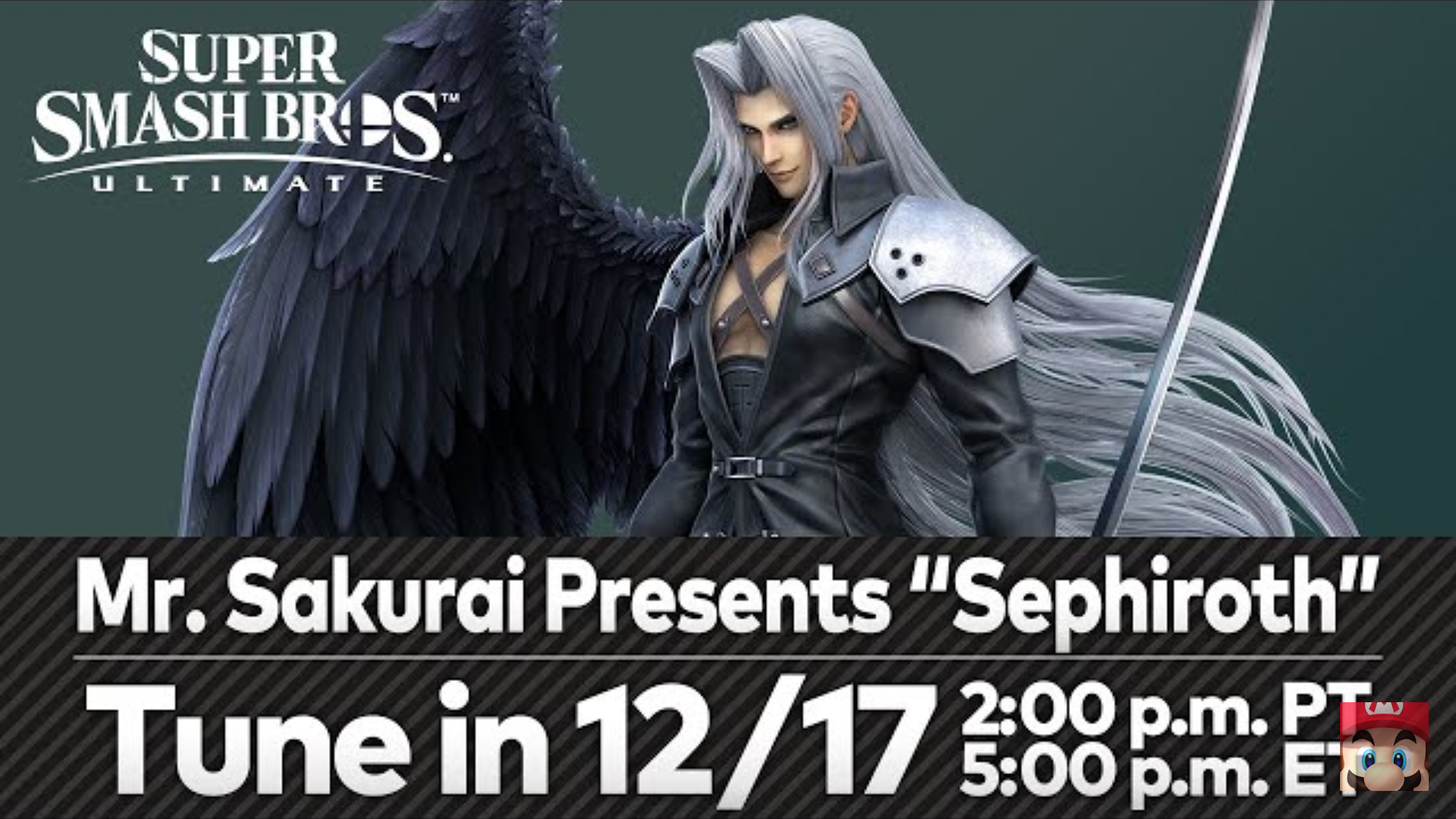 The Mr. Sakurai Presents “Sephiroth” Livestream from Nintendo showcased the newest fighter to be joining Super Smash Bros. Ultimate. Sephiroth is the one-winged Angel that haunts Cloud Strife in Final Fantasy VII and he is not done with Cloud yet. Masahiro Sakurai gave an in-depth presentation with the character, showing his moveset, stage, songs, and played through Classic Mode.

Sakurai also announced that Sephiroth will be available from December 22nd for anyone who bought the Fighter Pass 2 or want to purchase the character separately. A special event is also being held in the game for players who have purchased the Fighter Pass 2 or the Sephiroth challenger pack and would like the chance to obtain Sephiroth early. It has three difficulty modes to choose from and will go live later today (December 17th) and run until December 23rd.

Lastly, New Mii Costumes were revealed and will be available to purchase on December 22nd. The Mii Fighter Outfits include Barret, Tifa, and Aerith from Final Fantasy VII and Geno from Super Mario RPG. While it looks like Geno won’t be getting an invite himself, at least players can create their own Mii Fighter of the Square Enix character.

If you would like to watch the Mr. Sakurai Presents “Sephiroth” Livestream, you can check it out below. We also have the official announcement from Nintendo that has more details on what was shown during the Livestream.

REDMOND, Wash., Dec. 17, 2020 – Sephiroth, the fan-favorite villain from the FINAL FANTASY series, is descending from the heavens with his gleaming sword in hand to join the Super Smash Bros. Ultimate game as its newest playable DLC fighter. On Dec. 22, Fighters Pass Vol. 2 – Challenger Pack 8 will be released for the Nintendo Switch game and contains Sephiroth as a playable fighter. It also contains a new stage based on the Northern Cave setting and nine music tracks, including “One-Winged Angel,” which many video game fans are surely singing in their heads as they read this. Challenger Pack 8 is part of Fighters Pass Vol. 2, which can be purchased for $29.99 and also includes Min Min from the ARMS game, Steve & Alex from Minecraft and three more yet-to-be announced fighters as they release. Challenger Pack 8 can also be purchased separately for $5.99.Sephiroth launches on Dec. 22 as part of Challenger Pack 8, but fans can unlock the fighter early by participating in a special boss battle in the game. By pre-ordering the DLC (either separately or as part of Fighters Pass Vol. 2), players can take part in the special in-game Sephiroth Challenge which begins later today. If players complete the challenge on any difficulty setting before the fighter’s official release, they can unlock Sephiroth, the Northern Cave stage and the additional music tracks early!In a new video, Masahiro Sakurai, the creator of the Super Smash Bros. series, walked viewers through a detailed breakdown of Sephiroth, including his move set, a first look at his new stage and other newly added content.“Super Smash Bros. Ultimate continues to be the largest gathering of characters in video game history,” said Nick Chavez, Nintendo of America’s Senior Vice President of Sales and Marketing. “Every time new content is added to the game, it gives players even more ways to play, more strategies to perfect and more video game history to reminisce about.”

Sephiroth joins Cloud as another playable fighter from the FINAL FANTASY series. But their play styles are far from similar. While they both possess swords, not much can compare to the range of Sephiroth’s legendary Masamune. He is also a much lighter fighter, offering quick movement, but taller and more prone to be struck by opponents. Using a combination of powerful and fast-moving slashes, air attacks, magic spells and throws, Sephiroth and his mighty Masamune are a formidable pair against Cloud and the dozens of other Super Smash Bros. Ultimate fighters.

The new stage that is included in Challenger Pack 8 is based on the Northern Cave, an iconic location from the FINAL FANTASY series where a climactic battle with Sephiroth takes place. Fans of FINAL FANTASY will be delighted to see some familiar imagery while fighting on the stage, including the all-powerful summons Meteor and Holy, as well as the Highwind airship. Fans will also notice that, since Sephiroth is a video game boss character himself, his Classic Mode journey in Super Smash Bros. Ultimate leads him through a series of battles against various bosses, including Dracula from Castlevania, Ganon from The Legend of Zelda, Rathalos from the Monster Hunter games and even Galleom from Super Smash Bros. Brawl.