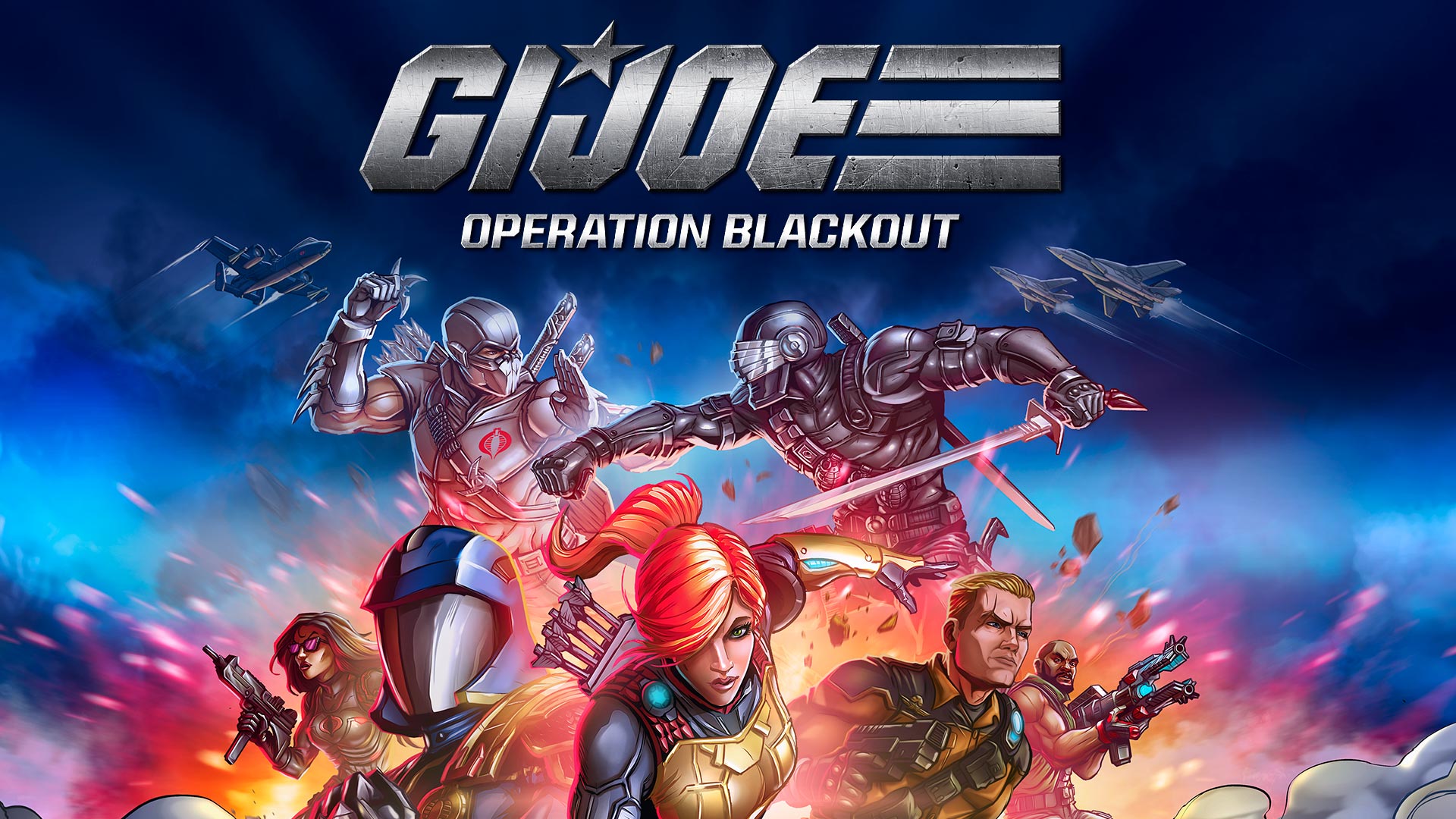 The Nintendo Switch has slowly but surely adapted to finally having some decent shooting games. Titles like Crysis Remastered, Sniper Elite 4 among others have seen some great success and were pretty well received on the Switch. G.I. Joe: Operation Blackout is a decent addition to the Switch’s budding library of shooters, but occasionally misses the mark where others hit a bullseye.

The plot behind G.I. Joe: Operation Blackout is as stock a GI Joe story you can get. Cobra takes over the world, and the Joe’s must find their leader and take the world back from Cobra. If you’ve ever read the comics or watched the old TV show, you understand the plot immediately. The point of G.I. Joe is good versus evil and in this game in particular you end up playing both sides of the story. In one chapter you’re a Joe, fighting the evil cobra and trying to accomplish your mission. In another chapter, you’re a member of Cobra and shooting the good guys and helping Cobra take over the world.

While I appreciate the dichotomy between Joes and Cobras, I think this game should have given you a distinct choice in the beginning to either play as Cobra or Joes. The back and forth can be a little convoluted and confusing if you’re trying to follow the forgettable plot anyway.

Just like any major action movie such as The Expendables, Rambo or even Die Hard, the plot doesn’t really matter so much as the action. Where the story dips and falls into generic execution, the game does make up for in action. Let’s be real, you’re not playing a G.I. Joe game for the story. You want to take over the world or save the world with the help of a plethora of allies and weapons throughout the game.

You will see all the main characters from both sides such as Snake Eyes, Roadblock, Storm Shadow, Lady Jaye, Destro, and Cobra Commander. It’s a shame the story itself isn’t very interesting, as this game had a lot of potential to be something special.

This game had the potential to be fun. I came in expecting a decent (though not AAA level), third-person shooter. What we end up with is a slightly mediocre action game that takes some influence from the likes of Gears of War and other third-person shooters and blandly mixes them together with some basic functionality. You even reload the same way you would in Gears. It just feels a little underwhelming overall.

The biggest complaint I have is the camera work. The shooting and aiming system are okay if you’re good at lock-on aiming and firing. The camera is just clunky. I died more times because of the camera and the reticle that would not stay on target or would not get to the target fast enough and when your shield breaks, your health will deplete in a firefight pretty quickly.

This title has 12 characters on each side, all with their own unique skins and weapons and even weapon skins. Each character also has their own “ultimate” ability, akin to Overwatch. Some are decent and powerful, while others are okay and don’t really add much except a little bit more power.

The weapons systems are generic and your basic array of guns. Shotguns, an LMG like laser cannon, a pretty powerful sniper rifle, an overpowered pistol, and the stock automatic machine gun. The grenades pack a punch, some waves I took down with a single grenade if timed correctly. Nothing to complain or be excitedly wow-ed about in the weapons department.

Some missions required you to drive a giant tank-like vehicle that was like skating on ice for the first time. It took a little bit to get used to as the controls are as slippery as the early Halo Warthog were back in the 360 era. The tank has the main cannon and a minigun and will take a ton of damage if you hit a big rock, so be careful as you navigate the slippery terrain.

Alongside the campaign,  G.I. Joe: Operation Blackout features a local multiplayer mode that allows up to four characters at a time for a small batch of game styles. While I do wish this game had online multiplayer, I do appreciate the couch co-op and local multiplayer additions that hearken back to the days of Goldeneye and other such shooters.

While I do wish there was more to the gameplay, this game doesn’t really need much more for what it is: A fun third-person action shooter that is a lot more fun with friends In co-op mode (the CPU partner is a really bad partner…) that features a decent multiplayer mode for those that wish to party like it’s 1997.

As mentioned earlier, this game features a small collection of local multiplayer modes. To make the campaign worth dredging through, G.I. Joe: Operation Blackout features some neat unlockables to keep you excited about the otherwise bland world and story. Each character has their own set of unlockable skins and weapon skins unique to that character that you either find in the world or unlock through other means. There are also neat comics to find throughout each world as easter eggs.

Aside from the 17 missions, there’s not a lot more to this game than the unlockables for each character and their weapon skins. The skins are also nothing to get excited about, one has a chef’s outfit which looks hilarious as he’s mowing down bad guys, others are just generic recolors or a different type of military outfit. I wish there was more to be excited about with this title.

While the game’s “cinematics” is stylized in simple comic book arts with voice overs, the voice acting is actually quite good. Each character does have a strong personality and it does feel like we are watching a Saturday morning cartoon with each cutscene. The balance in the voice audio is quite well mixed too.

The music is about as generic and bare as one could expect. Heroic style background music that doesn’t really add too much to the overall experience. It’s not terrible, it’s just not quite outstanding either. Each level does have its own unique music, but it’s just good background music.

The gunfight audio can be a little annoying. Every hit you take is pretty loud, coupled with a constant vibration in the controller (which you can control), it can be quite jarring at times when firefights and waves get hairy. At least you know you’re being shot because the sounds are pretty ear-piercing.

Graphically, this game completely misses the mark. The graphics remind me of an older Xbox 360 game instead of a brand new title for the Switch or PS4. In docked mode especially, the visuals are quite rough. When firefights get chaotic, there were definitely some dips in frame rates. Even the character selection menu is not the best. I’ve personally seen games on my iPhone look better.

I am not a developer nor do I really know what a game developer goes through behind the scenes, but with today’s standard of graphics, I do wish the team that put this game together had put more thought and care into the graphics. In the past, I have always said the graphics do not make the game, but if you have to look at something for 5-8 hours, it needs to be enjoyable. The presentation overall for this game was subpar.  The comic book-esque cinematics are decent and really are the only saving grace. This game just does not perform well on the Switch.

With an influx of shooters being added to the Switch, this game could have been a great addition. Essentially, this is Gears of War for kids. The graphics are not the best, which most kids don’t care about (although they will know if a game’s graphics are bad and will tell you immediately without hesitation). The controls are not bad, although a little clunky at times and the overall presentations are just like the franchise of G.I. Joe: Generic and bland. We all loved the series growing up on Saturday morning cartoons, but it seems every time someone tries to make a G.I. Joe game, it does not live up to the expectations of anything we experience.

If you want to play a shooter on the Switch, there are plenty of other good titles out there. If you are a die-hard G.I. Joe fan, then pick this title up. If you are tired of your kids playing Fortnite, introduce them to your childhood G.I Joe heroes with this title, otherwise, don’t expect too much from G.I. Joe: Operation Blackout.