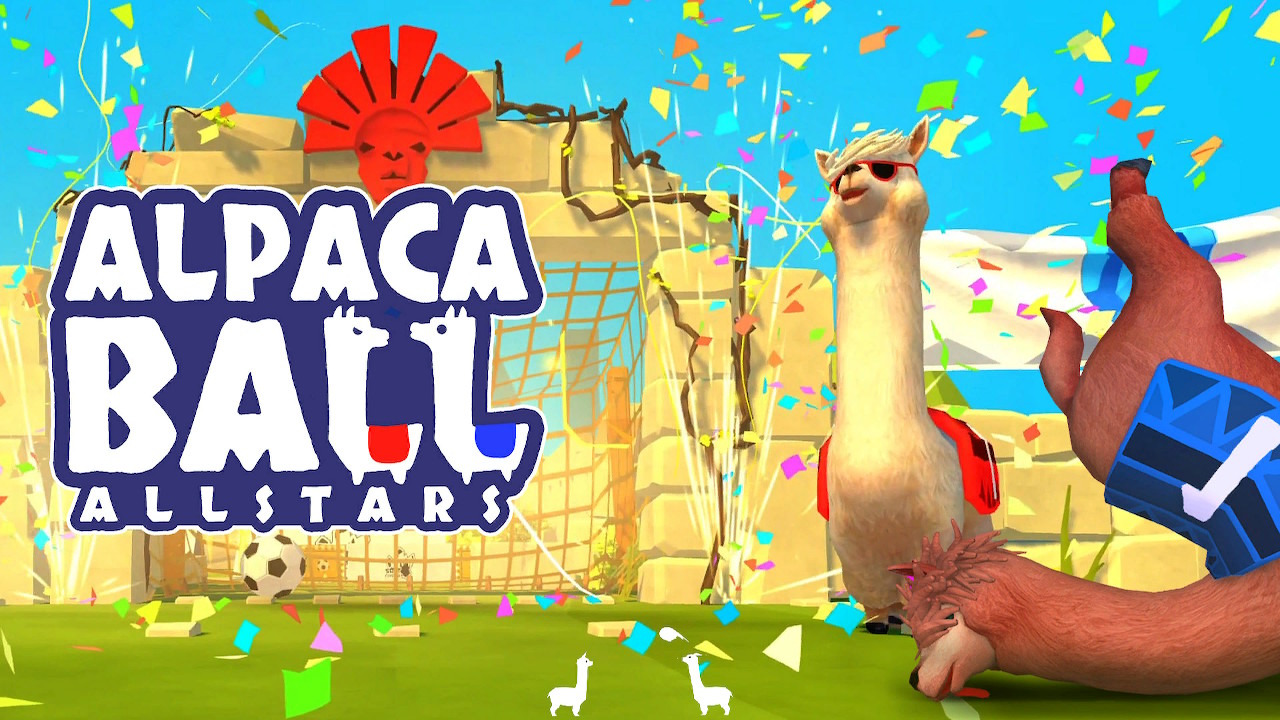 I couldn’t find much in terms of the history of Alpaca Ball: Allstars. The game dropped on all major consoles in October 2020 making its debut on the Nintendo Switch alongside all major releases. As far as I was able to find there are not any fundamental differences or parity with the other console versions, except that online play is for 8-player local matches only, whereas other versions allow for online play. This may be the biggest feature lacking in the Switch version of the game and put people off altogether, since getting 8 people together (currently during COVID lockdowns) may be impossible or irresponsible.

The campaign mode takes you around various locations and match types learning the ins and outs of being the best alpaca you can be in a sport generally made for humans to play. You run up the rankings of increasingly difficult AI opponents through to the end which results in you being the Alpaca Ball: Allstar. Along the way you will play against other teams, some introducing a variety of rules for your matches. All in all the games are 2v2 games set within a one-screen soccer stadium complete with power-ups.

The game uses a colorful map, reminiscent of the overworld map in the Overcooked series of games, complete with levels and white dashed lines to lead your way. There is story banter back and forth between you and other NPCs, but most of it is just leading you to the next match, talking about how you could improve, and jokes that generally are pun-filled.

Playing Alpaca Ball: Allstars is a lot like guiding the Goat in Goat Simulator or the father in Octodad. You often feel a bit awkward as your long-necked player runs up and down the pitch and swings their neck towards the ball for a hopeful goal. You move along the field with the L stick, jumping with B. You can dash by using the L and R shoulder buttons and use your power shot by double-tapping B. Depending on the positioning of your alpaca to the net you may want to shoot either with Y which is the backward shot or A which is your standard forward shot. You can pass to your teammate, but usually, it seemed pretty random as to which direction the ball went and if it went towards the goal or to my teammate as a pass.

Along with “normal” in air quotes, since there is not much normal about alpaca’s playing soccer, there are power-ups in the game. These can result in various gameplay mechanics being turned upside down. For instance, you may get the lucky shot which pushed the ball to the goal like a laser-targeted torpedo. There are size-changing mechanics making you either slow and gigantic, or small and fast, though controlling each of those changes a bit in reaction and speed. There are other power-ups that can affect your opponents varying their size, making them run in opposite directions, and more.

Along with gameplay altering abilities, you can select various different types of balls as well. There are beach balls that bounce more uncontrollably than normal soccer balls, rugby balls that have a chaotic trajectory, and more.

If you jump into 1-8 player local multiplayer matches you can choose a variety of game-changing rules. Match times can be 1-10 minutes in length, ensuring that more time means more goals scored. Golden Goal or Draw which allows for ties or forces one team to win the game. You can also allocate up 7 computer AI teammates and opponents if you need to fill out your game. There are Easy, Medium, and Hard CPU difficulties as well giving the AI a better chance at scoring and a more aggressive playstyle. Lastly, you have the ability to turn off game power ups.

Before you play a game you can choose from a variety of colors for your alpaca, as well as a series of hats/hairstyles to differentiate them from your teammate or opponents.

There’s not much here in terms of audio. The game tries to have cultural/soccer themed music, though I would contest that it got boring and repetitive very fast. There’s also the overused sounds when you get a goal as the ball and fireworks show afterwards seem to erupt. If you have played Rocket League, you know what I mean about the repetition of the overplayed Goal audio.

Alpaca Ball: Allstars as a low poly world map, which is vibrant and colorful. The game also uses a bit of a cell-shaded look in its cast of characters. The overall look and feel of the game is fun and vibrant and matches the ludacris level of alpacas playing soccer.

I noticed several times where the game seemed to stutter during gameplay and moving around the map. It seems that when there is a lot going on the stage like a recent goal animation or power-up that Alpaca Ball: Allstars struggles to maintain any kind of frame rate consistency. Overall the game usually ran decent enough and since games are fast-paced, during actual gameplay scenarios, the game ran fine enough and was playable both in docked or handheld.

Alpaca Ball: Allstars seems to fit in the niche animals playing sports genre which is sorely lacking. Though as a packaged game sitting alongside other arcade-style games like Mario Tennis and Rocket League. Alpaca Ball: Allstars isn’t as polished as either of those titles but if you like games that play with wonky physics like Octodad and Goat Simulator, having fun with your friends in a game of alpaca soccer might be great for laughs during parties.

You could do a lot worse when it comes to sports games on the Switch. While Alpaca Ball: Allstars isn’t a terrible game, I think the shallowness of gameplay and heavy arcade feelings of high scores and luck-based physics might turn a lot of people off. But if you are just looking for laughs and a game that will keep you grinning, Alpaca Ball: Allstars is a decent enough game to give a go on Nintendo Switch.