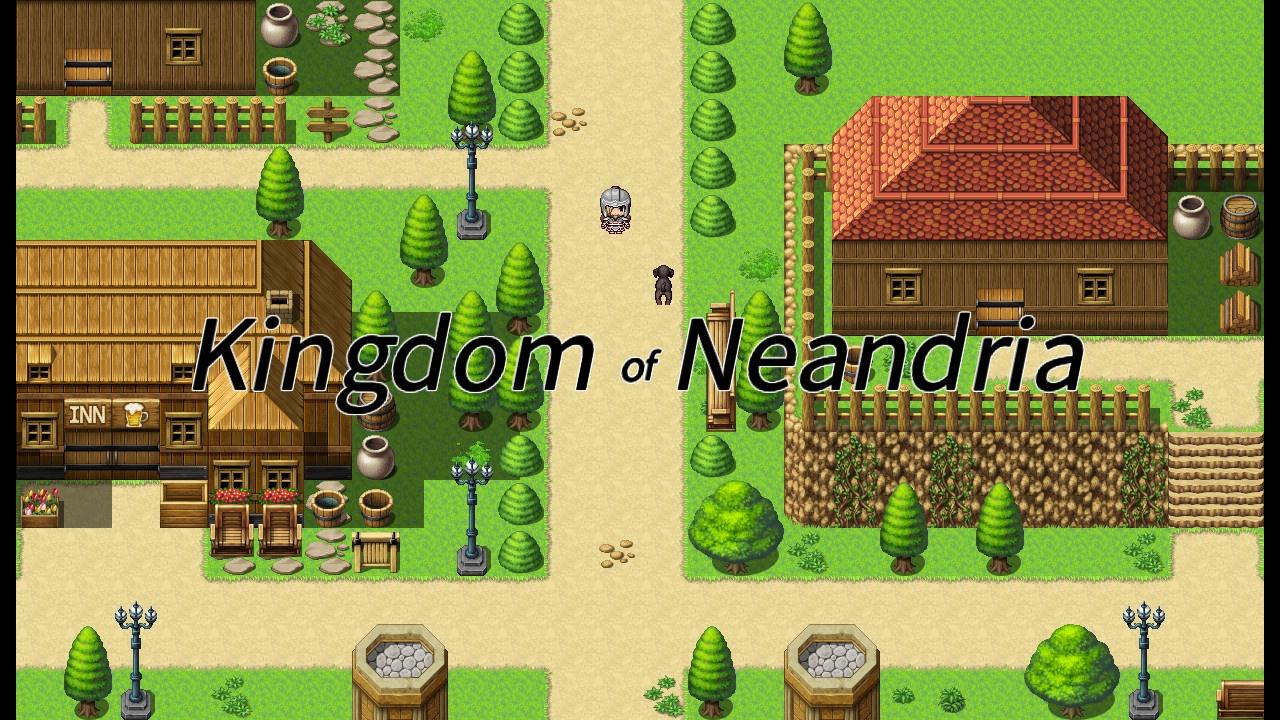 RPG Maker MV released on Nintendo Switch back in September this year. The game allows players to create their very own RPG’s by literally handing over the keys to the kingdom. There are thousands of assets at the player’s disposal and they can make their own game as small or as big as they like. It is one thing to have the tools to create an RPG though, and another thing to actually do it. However, one person has actually created their own RPG game and got in touch with us to try it out.

The game is called Kingdom of Neandria and it was created by @KNeandria. It is designed to be a 4-5 hour long demo to a much larger game and therefore features the starting area and the first dungeon. It is actually very well designed and a lot of thought and work has gone into the process. Here is a synopsis of the game:

The game starts with you, Philo, waking up to your daughter (who is very ill) speaking a strange tongue in her sleep. The problem? Your daughter was born a mute. The following day, after conferring with a doctor from a nearby town and your father-in-law, you determine that magic may lie at the root of your daughter’s condition. You decide that the next best course of action is to seek out the local witch doctor who lives in the woods nearby. That’s all I’ll say here–the rest is for you to discover! The game includes a village, a forest, a mountain, a beach, surrounding plains around the village, and the game’s first dungeon, as well as dozens of NPCs, lots of story, and a few sidequests.

In order to play Kingdom of Neandria, you can download the RPG Maker MV Player software for free on the Nintendo eShop. You can load the software and play games created by other users for free. To download and play Kingdom of Neandria, it can be found by using its ID Number: 405. We have recorded our own gameplay of the game so you can see just what kind of game it is, how it looks, and most importantly, how it plays.

Because we enjoyed the game, we reached out to @KNeandria to answer a couple of questions about its development and the difficulties they face using RPG Maker MV to create Kingdom of Neandria.
What is Kingdom of Neandria and why did you create it?
Kingdom of Neandria is a traditional turn-based JRPG that takes place (as you might guess) in the Kingdom of Neandria, particularly in the main character’s (Philo) hometown, Rosedale, and the surrounding areas. My primary focus in the development of the game was to create lively environments with a memorable atmosphere, engaging characters, and a plot that contained elements of mystery, comedy, and tragedy. While combat is turn-based, there are no random encounters as all enemies are seen on-screen prior to battle. I also decided early on not to utilize a world map as I felt that this would hamper the sense of exploration and discovery that I wanted to convey. Hence, all locations consist of interconnected maps as experienced in games like A Link to the Past or the recent CrossCode, to cite a couple of my inspirations.
In terms of my reasons for creating Kingdom of Neandria, apart from just a fondness for some of the great games in the RPG genre, I had really good memories playing RPG Maker on the PlayStation when I was a kid. So, when I saw that MV, which I had never played before, was coming to Switch, I thought it would be at least as enjoyable as the one from my childhood. And generally, I really enjoy games that let you materialize a vision, whether it’s Cities: Skylines, Stardew Valley, or Animal Crossing: New Horizons.
One final note on the game: Kingdom of Neandria was designed as a ‘demo’ in the sense that everything unfolds as if it represents the first 3-5 hours of a 35-40 hour game. That is, my main intent for the project was just to create this first ‘demo’ section, so whether or not I spend another 2000-3000 hours making it into a full-length RPG is uncertain, though at this point unlikely. My future ambitions for it partly depend upon the response I receive from players and if there is an actual audience for that kind of thing. I have established a GoFundMe campaign for anyone who completes the demo and would like to contribute financially to the further labor that would be required to complete the game. Otherwise, however, I made the game with the idea that the demo would stand on its own, despite many plot threads being left hanging when the demo concludes.

How long did it take you to create the game?
It took me two months, in which I invested about 550 hours… My gaming habits were pretty unhealthy between the months of September and November.
Did you find the development tools in RPG Maker MV easy to use?
Not at all. Actually, almost nothing came easy. This is partly because I hadn’t played an RPG Maker game since the PlayStation, so I had little remembrance of what to expect, and also because the mechanics can be very confusing and intimidating when you’re trying to create at first, especially a big cutscene with lots of moving parts. Take, for example, a scene that occurs about three-fourths of the way into the game that takes place at Philo’s house. There are, for most of the scene, nine characters involved. Each time a character spoke, I had to individually input a command so that the other characters would be facing in the general direction of the character who was speaking.
That might not sound like a big deal but on the Switch version, at least, it was extremely time-consuming. That whole scene at Philo’s house, involving the Village Elder’s story and the ‘exorcism’ of Lydia (Philo’s daughter) took me about 4-5 days, or probably somewhere upwards of 50 hours, to get right. In short, the whole process, while fun and addictive, was also oftentimes a huge pain. This was all made worse by the fact that there’s not a lot of help out there for Switch users as PC users just write scripts and/or use plugins any time they want to do something that the default mechanics don’t offer a good solution for (take, for another example, a ‘steal’ ability).

Did you have any issues creating the game?
Haha, yes! See my answer to the previous question! But to elaborate a bit further, one of the challenges about using the Switch version of MV is that I was restricted to using default tile sets and unable to utilize plugins. Yet, this is also what motivated me: I really sought to dispel the notion that a solid RPG cannot be made using only the baseline tools that MV offers. I think I have succeeded, insofar as I am satisfied with the result, but that will ultimately be up to you, the players, to judge. Beyond that, an ability to use a mouse and better cut/paste functionality when it comes to scripting event commands would have probably saved me, in all seriousness, dozens of hours.
How can players of your game contact you to give you feedback?
I happily interact with anyone who contacts me on Twitter, @KNeandria, and feedback is always more than welcome. You can also find the link for the GoFundMe campaign there although at this point I’m less interested in actively promoting that as I am just getting the word out there and having people play the game.

Thank you for reading this little feature. It never ceases to amaze us the talents that people have in our community and we love to share their projects and creations with the rest of our community. We wish to thank @KNeandria for sharing his game with us and we hope you will decide to give it a go on Nintendo Switch.

If you have your own Nintendo project or creation that you would like to share with us, please be sure to get in touch at contact@miketendo64.com