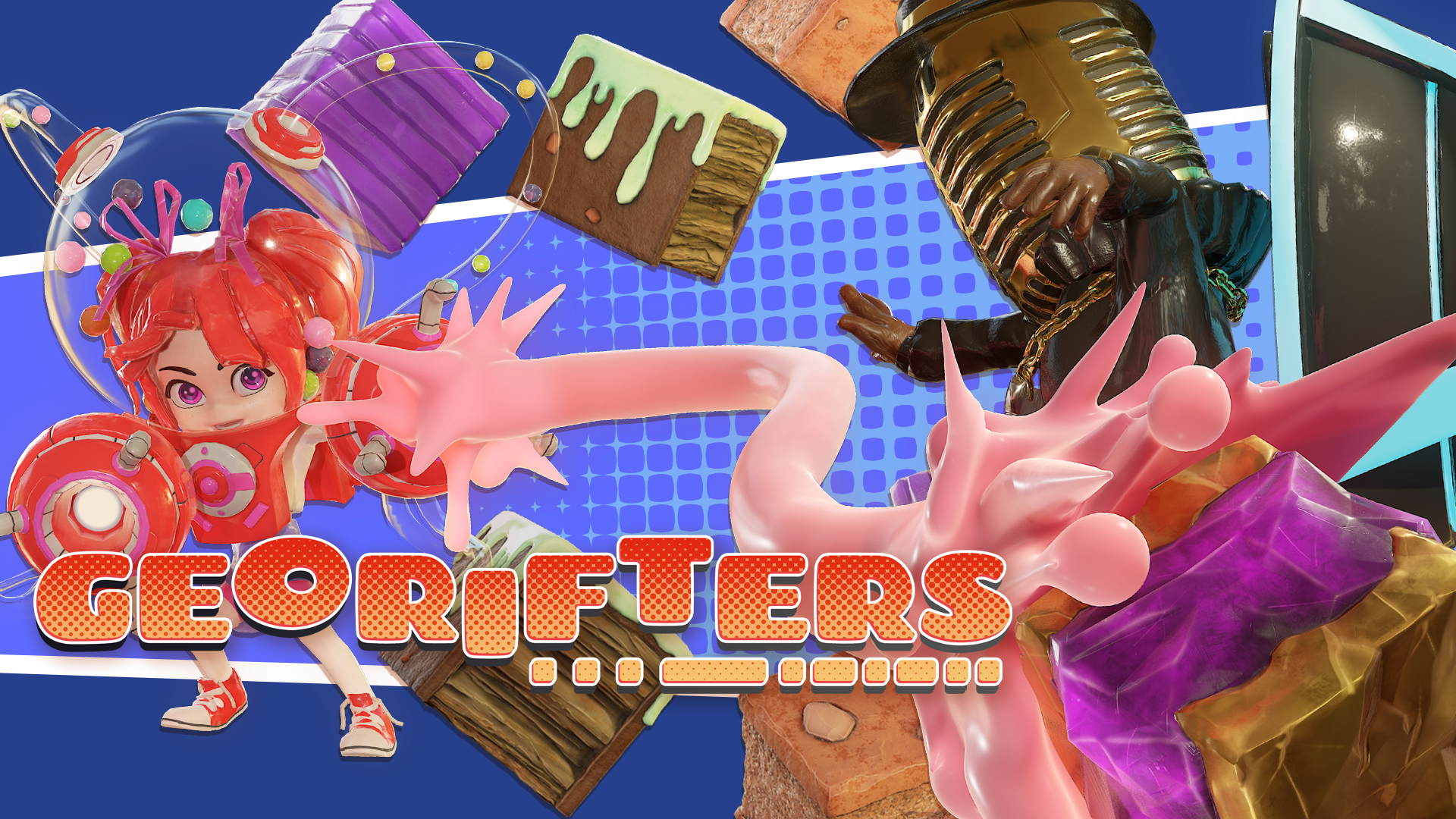 Georifters is a unique puzzle-solving platformer that was developed by Busy Toaster Games. Busy Toaster is a team created and owned by Playerium, which was founded in 2015 by video game industry veterans who wanted to reduce the amount of non-creative workflows and processes that engulfs development.

Georifters was released on the Switch in September and was also released on PC, Xbox One, and PS4 earlier in the year on May 29, 2020. This game received a few awards such as the “Best Casual” Game from the Dreamhack Anaheim 2020 Indie Awards and was a finalist for the Taipei Game Show 2020 Indie Award for “Best Design.” This unique game does deserve praise for its vast array of features and worlds to explore to have been created by such a small team.

While the story is not the deepest, it does set the tone for the entire game. Georifters is a story about intertwining worlds that all connect with each other as you traverse the levels as different characters. You begin as Candy, our main character, as she interacts with various characters and their unique worlds such as Dr. Schnoz and his nostril spreading skills and The Chief who is obsessed with chocolate. (This game is replete with food puns….).

The story itself is simple, and merely a backdrop to the main premise of the game: Challenging puzzle-solving and platforming. This game doesn’t hold a candle to the challenge of the likes of Celeste or even old school Super Mario Bros and  Megaman but the challenge is still there, and unrelenting at that. If you run out of lives before you finish the level, you have to start all over again at the beginning, a la Megaman.

I appreciate the challenge, but it can be frustrating when you are just trying to make it to the end of a level after giving on catching all the crystals in each sub-level, unfortunately, the story is forgetful, however, it is quirky and the dialogue between the characters is humorous enough to keep me interested throughout the game.

The primary controls for this game are using the R button to move blocks in any direction and a special ability that is unique to each character. Candy can use her bubblegum to pull blocks towards her, while Dr. Schnoz can use his special ability to separate a row of blocks upwards and downwards. There are also characters such as Rolbert, Mighty B, Lex, and Crank which you will need to play the game to understand their unique abilities!

The premise is skill and timing and puzzle-solving. Getting to the end of a world after collecting all the crystals for every sublevel is quite satisfying. Other levels are frustrating enough to just grab a crystal and just move on to the next level. I would say that is quite balanced for both the casual gamer and the hardcore platforming expert. This game is perfect for parents who want their children to get off their phones and play something fun together.

The platforming and puzzle-solving of this game are well done, however, the formula is almost too basic. This game definitely deserved the “Best Casual Award” mentioned earlier because this game is more suited for handheld mode to mindlessly play as you binge the latest series on Netflix or YouTube. This is almost as if Candy Crush made a platforming type game. There are an incredible amount of levels, but the monotony can almost keep one from finishing the game itself.

None of this is to say this is a poorly produced game at all. It just simply lacks variety. There are plenty of unlockables such as weapons and skins for each character, but the grind can get to you. You collect crystals in every sublevel for each world that you spend on upgrades, skins, and other unlockables. You have to really, REALLY love this game to unlock all the things available.

Aside from the basic campaign which includes two-player co-op, there are challenge modes and a 4 player battle arena as well. This game is chock full of unlockable skins and weapons. Over 30 levels, six worlds, and well over 300 stages, this game is full of content. If you’re a completionist, this will keep you occupied for some time. If you’re more of a casual gamer, this game is mindless enough to give you something to do as you watch something on TV.

In the battle arena, you must collect the most crystals to win. In a randomly generated world, you fight against your opponent to collect the most crystals by any means necessary. With each characters’ unique abilities, this adds quite a bit of variety and fun to the multiplayer aspects of this game. This would be an excellent party game for kids or college-age players alike!

You can also collect cards and ability boosters to help you in a level should find yourself stuck or can’t figure out a puzzle. These range from speed increase to decreasing the cooldown for your special abilities. These do cost quite a bit of credits that you earn in-game, but they can be worth it. I didn’t realize until a couple of hours into the game that I even had credits to spend and I went on a little shopping spree of credits for abilities and items for my characters. Some rewards and abilities take a very, very long time to unlock. One award, in particular, requires you to complete 200 rounds in the battle arena and to reach level 27. You must be patient to 100% this game, as this could take quite a while.

Finally, Georifters includes its own achievement system, dubbed “badges” that unlock when you hit certain milestones. Further proof that the Nintendo Switch needs it’s own unique badge system. This feature is always a favorite of mine because I love seeing the unique unlockable rewards, or even the weird quirky rewards for certain achievements.

The audio in Georifters is basic and fun. The balance is well-tuned and nothing sounds out of place. The background music can be quite relaxing, especially the main title screen’s music. Think Splatoon with less in your face edge. There is no dialogue, just little quips, and sounds from the characters when they talk to each other.

I always love this feature in games because it forces you to read their dialogue and honestly, the dialogue in this game is quite amusing. I appreciate the humor and tongue-in-cheek remarks every character makes, which gives an otherwise lifeless body with special abilities a personality.

This game runs quite smoothly in both handheld and docked mode. I would prefer this in my hands as it is more akin to a mobile game than a big blockbuster hit on the TV. The graphics can be a little muddy and scratchy visually in docked mode, however, the performance is smooth. I experienced no hiccups or tears and the animations for the characters’ special abilities were very satisfying and smooth.

With the co-op and four-player battle mode, this would be a great game to play in tabletop mode on the go. If you have a child who takes their Switch to school, this is a great lunchtime game that doesn’t require much time and effort. Overall, I was pleased with the simple controls as well as the decent graphics and good overall performance of this game.

Georifters is the definition of casual, without being a money pit. There is just enough depth in the simple story and controls that give it a little edge over the likes of Candy Crush and is full of challenges and unlockables, but the vastness of the game can be a little intimidating, or off-putting. This game is great for fans of party games, brainteasers, 2.5D platformers, or just silly food puns.

The hardcore crowd may not find this game as enjoyable, however, there are games for everyone. Georifters runs well and CAN be addictive if you are into this style of gaming. If you are not a completionist, a fan of platforming, or dry humor and food-related puns, this is not the game for you.

Georifters whets the appetites of platforming fans, however, the buffet can be a little too much if you have had too much of a good thing. There are a variety of flavors in the different characters, but a game of this size, there has to be more keep us hungry.