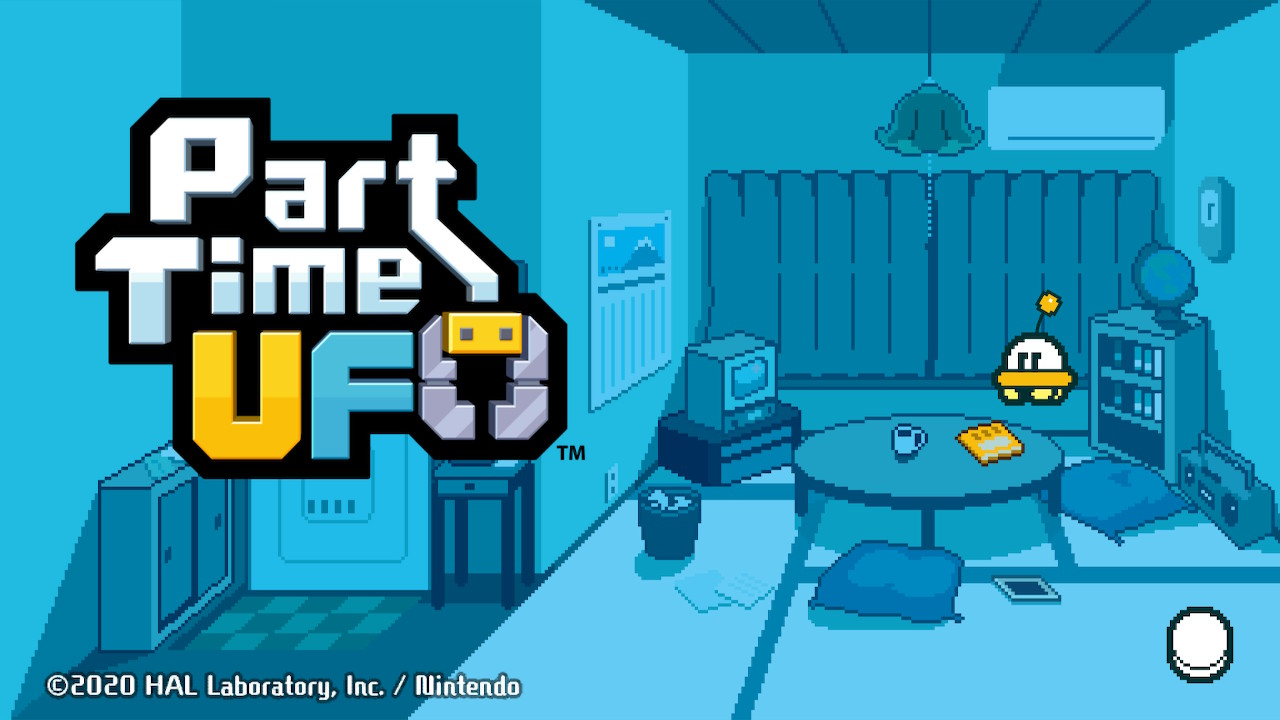 Though widely known for the Kirby franchise, developer “HAL Laboratories” have also created a series of other titles with unique gameplay mechanics and characters, like BOXBOY! for example. On November 14th, 2017 they released a new title, “Part Time UFO” onto mobile platforms in Japan, and later worldwide in February of the following year.

To the surprise of many, featured at the most recent October Nintendo Direct Mini, was an enhanced port of Part Time UFO, which released onto the Nintendo Switch that same day.

There’s not much of a story in Part Time UFO, other than the first thirty seconds after you boot up the game for the first time. You play as a UFO named… well, UFO, who had just arrived on planet Earth. After helping a farmer in the first level, you’re given a list of part-time jobs to complete. That’s about all the lore you’ll get, since the game focuses in its entirety on gameplay, rather than having a narrative.

The gameplay in Part Time UFO is quite simple. The UFO that you play as, has a claw that can be lowered and pulled back up as many times as you want. It’s quite big, so you’ll have to work around spaces to grab objects. Using the left analog stick, you move the UFO. With the face buttons, you drop the crane, which automatically pulls itself upwards after dropping. To drop the object you’ve grabbed, simply press one of the face buttons again. There’s also two secret emotes you can perform with the back-triggers.

With a game revolving around balancing objects, you need a good physics system, and fortunately, Part Time UFO nails this. Bigger objects are heavier, there’s momentum when throwing objects forward after gaining some speed, objects wobble and tumble when placed incorrectly.

There’s a total of thirty levels, divided into three levels for each sub-area. You can obtain three medals by completing special tasks, and you use these to unlock new sub-areas. You only need fifty medals to unlock the final set of levels, however. After completing a stage with all tasks complete, you unlock an alternate version of said level, which is harder to beat and require more skilled plays. Like the normal version of these, you can unlock three more medals for completing tasks.

Speaking of which, the objective in each level varies, though they follow a similar line. The main goal is to claw the objects in the ground and leave them in a designated area. There’s no reward for simply completing a level, so you’ll have to work for those medals. Usually one of these challenges is to complete the main task before the timer reaches zero. The other two tasks are harder though. You’re never explicitly told what to do for each task, instead, you have to decrypt them with the provided task icon. Some are rather easy to figure out, while others are confusing enough I had to search them up online. As an example of these tasks, on a dock level, you’ll have to collect ten fishes before the timer runs out, or build a broken sculpture in a museum to its original form, or select different desserts.

As previously mentioned, there are thirty levels, double if you consider the alternate challenge version of these; plus one-hundred and eighty medals in total. Additionally, there are a few other modes and collectibles for those looking at 100% completion.

There’s a shop, owned by a female alien, where you can purchase costumes tailor-made for visiting UFOs in the Milky-Way Galaxy. There are thirty charmingly distinct costumes, some of which can grant you some minor abilities when in a level (better speed, stronger crane, etc.). You purchase these using in-game currency, which you unlock simply by completing levels and tasks. Trust me when I say these are ADORABLE and absolutely worth unlocking them all, simply for aesthetics. Then there are the Feats of Glory, essentially an in-game achievement system. They’re spread in grids of four that, once completed a set, unlock an adorable cinematic that plays on loop.

Finally, there’s a local 2-player co-op mode. While in concept this sounds like a lot of fun, it ends up being more of a struggle between two players trying to do the objective at the same time rather than cooperation. Levels aren’t structured for two players in mind, so this option, while nice to have, doesn’t serve a lot of purpose other than more inconveniences when playing.

I was shocked at how good the soundtrack is. The main theme is an absolute bop, and for the most part, the rest of the OST is remixed versions of this one theme. It never got repetitive, and the theme itself was catchy enough to have it looping in my head for a few days. Sound effects are pretty good too; both the SFX and music are chiptunes, reminiscent of the early Kirby SNES games.

Part-Time UFO is adorable. Have I said this enough yet? I’ll say it again. Part. Time. UFO. Is. ADORABLE!! It has some of the best pixel art I’ve seen in recent memory. Characters have a thick black border around them, and they’re well-animated and expressive. Backgrounds are just as lively as the characters on-screen, with great detail and movement.

After beating a stage, you can press the + or – buttons to take a screenshot and post directly to social media. After doing so, you’re presented with a cute illustration of the level you just played. It’s a fantastic way to incentivize sharing stills of the game online.

While yes, the physics in Part Time UFO are mostly great throughout most of my playthrough, there were the occasional one or two levels where I struggled with certain objects and it felt more like a fight against the physics system, rather than the game simply challenging me. It’s a minor inconvenience that appears from time to time, though I thought it was worth mentioning.

Being developed by HAL Laboratory, there are a few easter eggs from their other franchises here. For example, on every level, you can find Qbby from BOXBOY! hidden in the background.

While I don’t have specifics, your playtime will range around roughly two to three hours. Part-Time UFO, though a lot of fun, ends up being rather on the short side.

Part Time UFO is another great game from HAL Laboratories. Though the experience itself is quite short, it’s compensated with it’s addictive gameplay, fantastic soundtrack and charming design.