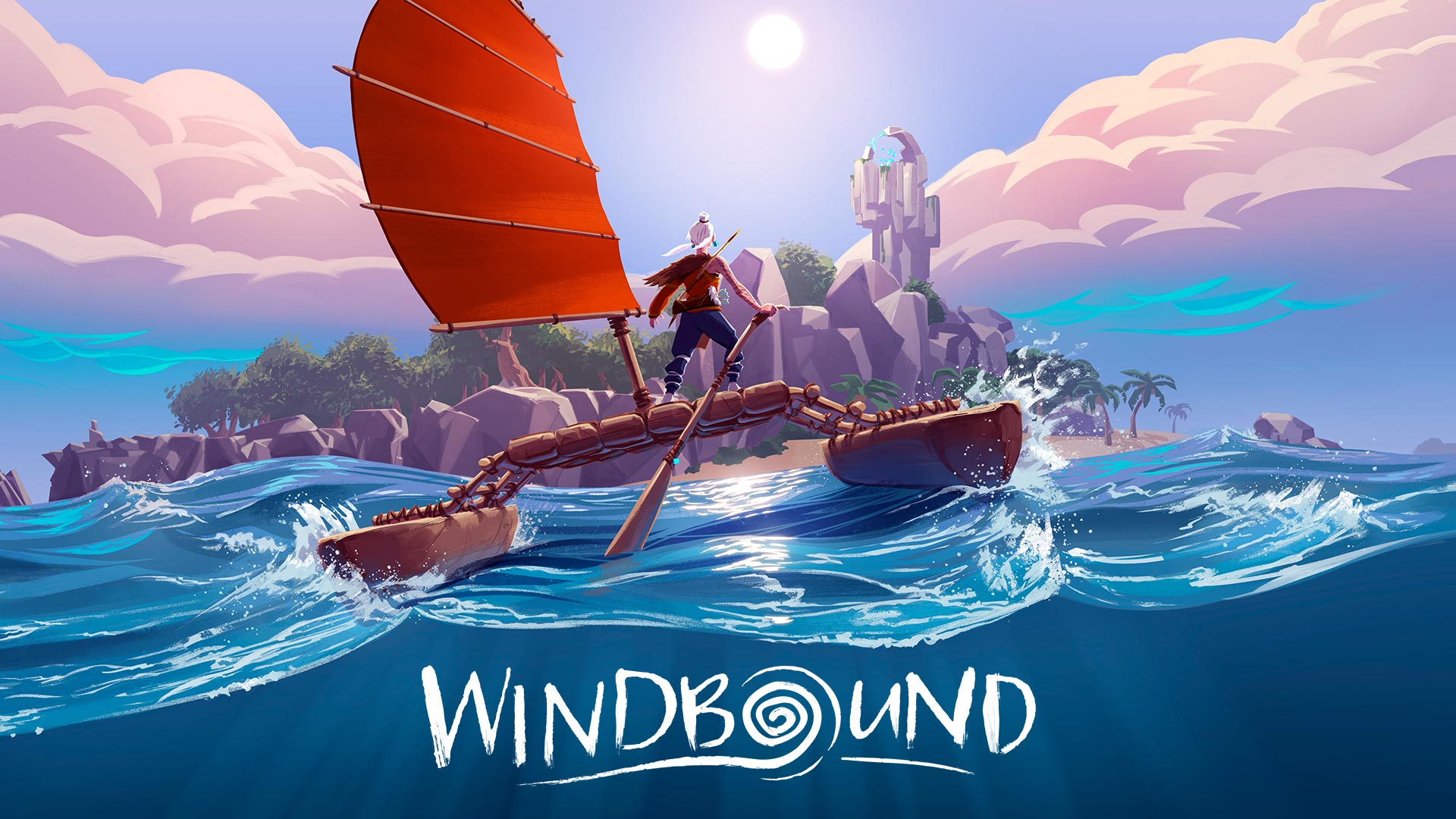 Windbound, by developer 5 Live Studios, came out this August on Nintendo Switch, PlayStation 4, Xbox One, Microsoft Windows, Google Stadia. Not much was known about Windbound until some press info releases in May and June via the developer’s website and twitter. The initial game reveal showed off a vast ocean world, visiting islands, and huge beasts threatening our heroine and her small boat.

In Windbound, you play as Kara, washed up on an island shore. You are thrust right into the game’s tutorial of movement, item collecting and crafting, and combat. From there you, the player, need to decide how you want to venture ahead crafting items, managing those items, engaging in combat, fueling your health meter by finding food, cooking raw meat, and moving forward to the next set of islands.

Within the chapters, you will need to unlock three beacons that tower overhead to then unlock the next portal taking you deeper into the game. The ocean may be vast, but it’s not plentiful and it is easy once you get going forward to skip over some of the smaller islands, though I would recommend visiting islands you see as certain ones containing structures that will help you unlock health and stamina abilities.

The actual story you uncover is told through the game’s mid-chapter moments where you will reveal a mural depicting the events Kara has been thrust into. There’s nothing really revelatory there or that stands out, and since there’s not much in terms of written dialogue within the game, the story ultimately of Windbound is your journey from start to finish.

There are three main parts to Windbound that sum up its total gameplay package. You have your sailing, which for the most part is relaxing though the later game’s chapters do require a bit of swerving and avoiding attacks from animals in the water. Sailing is made faster by upgrading your boats and outfitting your rig with sails, and other items to ensure smooth sailing from island to island.

Crafting is a huge part of Windbound’s main gameplay concept and takes a front and center approach. You will be cutting down a lot of trees and tall grass, picking up rocks and berries, digging in mounds of dirt, and more throughout the story. Once you have a certain amount and type of item you can begin crafting. You will see the crafting animations a lot during your time in Windbound. They get tiresome and repetitive quite quickly and slow things down as well. And since items deteriorate, weapons will break and food will spoil, it is important to always be ready to make more sharp sticks and slings for rocks, as well as keep Kara fed and healthy.

Lastly, there is combat. You can lock onto an enemy and dodge and strike them using your various items and weapons you have crafted. Each weapon has a varied attack range and strength. In one of my playthroughs, I came across a spear with a blade which helped to dispatch enemies rather quickly. Enemies vary somewhat as well from defenseless small rabbits like animals, to boars, to large almost prehistoric rhinos that charge at you. When you approach an enemy, you can sneak up on it, but most of the time they will see or hear you coming and begin charging towards you if they feel threatened.

There were a few times during my gameplay sessions where enemies would attack me and get Kara in a defenseless loop of kill animations, one time in particular I had nearly full health and was taken all the way to death because I was thrown in the air, attacked, thrown again, and never able to recover.

Windbound does suffer from being more about exploration and discovery than anyone solid gameplay mechanic. It would have been nice to have some environmental puzzles, NPC interactions, and more, though that’s more of an opinion on what kind of game I wanted Windbound to be, versus what kind of game it actually is.

There’s a lot of islands to discover in Windbound. While not all of them will be lush and full of life, a majority of them do offer either a tower or combat scenarios as well as plenty of items to harvest. While this may pad the game’s length out somewhat, there are some ways to cheese the game if you are able to find mushrooms and use those to replenish health and stamina while you hope from island beacon to beacon opening up the portal. This method of cheesing the game may not work 100% though as you will need to acquire some modest boat upgrades to strengthen your hull for the journey in the final stages.

Windbound does include two difficulty levels, Story and Survival. I played the game on Story mode after first attempting the Survivalist path, which after losing about two hours of game time only to be sent back to the first island empty-handed, I figured the softer pace of the Story mode might be more up my alley. While I enjoyed that mode as well, which only takes you back to the chapter you are currently on, and with many of your items on your person still intact, the frustration with having to restart chapters over and over again makes for a rage-inducing game that I think few will stick with.

The gameplay loop and difficulty, along with some of the game’s jankiness, makes Windbound an acquired taste that I never really enjoyed in my several hours of attempting to get through the chapters. At some point, a game shouldn’t penalize you because enemy animations get you stuck in a combat loop with no way to recover or avoid. Having been ganged up on by two or three Gore Horns, slammed against the rocks, and then kicked sky does not make for entertain gameplay.

Sound effects in the game and music are fine in Windbound. The overall soundtrack is whimsical though not original enough sounding and catchy, like tunes you would find in games that inspired Windbound. Every time you have to interact with an item, like cutting a tree, picking up a rock, plucking leaves, etc, all have decent effects on them, but again nothing is really awe-inspiring and the sounds fit the game just fine.

My first weeks with the game were full of visual hiccups like screen tearing, pop in, getting trapped in the ground, water, objects, forcing me to quit the game and restart chapters. The main character, Kara, has a plastic sheen to her which made her look more toylike than realistic. The overall islands have lush grass, vast forest, stone architecture, items to pick up, and more, though the variety is not plentiful and so the assets you come across are fairly minimal and you will have seen most everything the game has to offer pretty early on.

Kara’s walking and jumping animations seem stiff which made movement slow in the game and jumping somewhat awkward. At least you aren’t tasked with jumping too much except for when you need to get out of harm’s way from a beast that will attack you and also when you need to get to the top of a tower to activate a beacon. The camera stutters and frame rate does seem to dip from time to time, though in my more recent playthrough, since the latest update the game does seem smoother.

Windbound does try to do a lot of things, and sometimes to its detriment. I found the survival mode to be very unforgiving and with some combat loops that can take you from full health to death in a moment’s time.  With the threat of having to start over again, story mode is definitely the best way to play this without raging and destroying your console from a cheap death.

While the various systems borrow from adventure and crafting games that came before, the various mixture doesn’t always equate to a decent game. There’s boating, but the oceans are sparsely populated and there’s nothing to do in the ocean except going from point A to B. Crafting is deep, but managing your inventory oftentimes becomes a game of dropping items and having to build weapons and items you may not ultimately use. Also, cooking can be painfully long and while waiting for meat to cook, you may not have much to do on the island while you are making your meal.

Under Windbound’s steep learning curve and various crafting systems that can be cumbersome and unintuitive to navigate, there’s a decent game that some players may have a lot of fun with. I have a hard time whole-heartedly recommending Windbound to gamers seeking a Windwaker-esque adventure. The gameplay loop of navigating a set of islands, fighting monsters, crafting gear, setting off some beacons and repeating, gets monotonous fast.