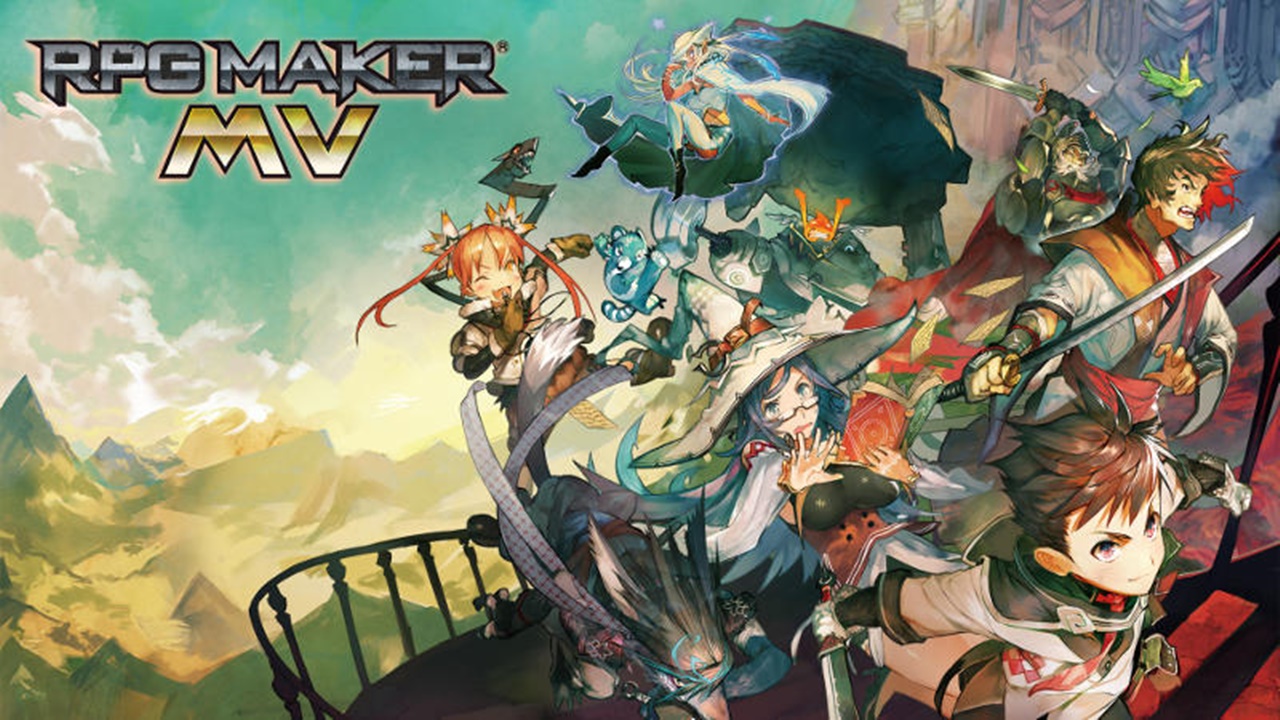 RPG Maker MV was developed by KADOKAWA CORPORATION and released on PC via Steam back in 2015. It scored very highly among user reviews, giving the game a rating of 9/10. The game boasts that it is “POWERFUL enough for a developer. SIMPLE enough for a child. Versatile enough for any platform!”  It is a relatively easy-to-use development tool that users can create their very own RPG games with and then share them with friends to play.

The part about being versatile for any platform is something KADOKAWA CORPORATION are certainly striving for. RPG Maker MV has been optimized to run on Nintendo Switch and PS4 for a more streamlined game building experience. Not only does it have all of the same features as the PC version, but the Switch and PS4 versions also have even more assets for users to indulge in.

The Story in RPG Maker MV is what YOU make it. Are you an elven forest boy who goes to rescue a princess from an evil warlock? Perhaps you lead a group of warriors through a lush world now plagued with monsters? RPG Maker MV is YOUR game and you can make the story YOUR way.

You are essentially a creator of worlds and it is up to you to build your game how you see fit. You have a wide range of tools and assets at your disposal. The only thing that limits what you do is your own imagination. If you can think it, you can create it (within reason of course).

There are two main types of gameplay for RPG Maker MV: Create Game and Play Game. In Create Game, you can use all of the available assets to make your own RPG game. You can create Maps and design them how you like. You can construct buildings by using the many tiles at your disposal and you can insert NPC’s and enemies to engage with. You can also save and playtest your game to make sure it is running smoothly and there is nothing you have overlooked.

In Play Game, you can play your created game or one that you have downloaded from the Maker Forum online. You won’t be able to edit the game should you find an issue like not being able to transition from one area to another or if an NPC won’t move to let you pass. From the pause screen, you will be able to opt to return to the title screen or the main menu.

In a way, I suppose you consider RPG Maker MV to be a cross between Super Mario Maker and the classic Final Fantasy games. However, instead of creating a single course at a time, you are creating a whole game which can be a little overwhelming at first. Ideally, you want to work on one part at a time and then move onto the next or generally plan what you wish to achieve on paper first. With the option to create multiple maps and use transitions to move from one map to another, you may soon overlook a small detail that might bite you on the bum later.

As regards combat which is practically the bread and butter of these kinds of games, it is turn-based combat in which you can choose to attack from a number of moves. After you have attacked, it is then your enemies’ turn. There are a number of enemies you can choose from to add to your game and you can also edit their parameters to make them stronger or weaker. You can also do the same to your team and add items that can be collected to give more buffs. The amount of experience gain after battles can also be gauged as well.

RPG Maker MV has plenty of content that might not seem too apparent at first. The In-game tutorial walks you through the basics of creating your game by giving you a template to work with. In a ‘learn by doing’ approach, you are tasked by the ‘king’ of a kingdom to take the game’s protagonist from his home and deliver something to their neighbor.

It isn’t so simple, however, as there are a number of instances that need to be rectified first. How can you water the plants if there are no plants to water? Why you have to program them in first! Next, how are you supposed to leave the garden surrounding your home if there is no transition to move from your home map to the overworld map? You guessed it. You have to add the transition.

The tutorial is quite lengthy but very beneficial in teaching you the basics of RPG Maker MV. After that though, you are well on your own so try to pay attention to what you learned in the tutorial. Should you have breezed through it and require a refresher, we have uploaded a gameplay video of the Tutorial which you can check out below.

When it comes to what you would like your maps and dungeons to look like, there are many types of tiles to use, from floor tiles to wall tiles and everything in between. You can also choose the theme of your map so that it will show the corresponding tilemap. Would you like to build a fantasy castle or perhaps a Japanese temple, or even a modern city with cars, trains, and shops!

You can also edit characters’ appearances with a vast list of parameters. Do you want them to look human? Perhaps they could be blue with pointy ears and fangs? This all comes down to personal preference, and there are many templates to overwrite so go nuts. You can then add characters into your game by creating an event and selecting the type of character you would like to add. The same goes for enemies as well.

As I said before when talking about gameplay, you can also download and play games that have been made by other people. The Maker Forum is the place to go. Here you can search for games to play and even submit your own onto the server. In order to do that though, you do have to show that the game can be played without issue first.

If you choose to search for games to play, you will find games created by other users. You can search by genre, title, ranking, and via Game ID if you have one for a game you are searching for specifically. Funnily enough, as I was browsing through the uploaded games to download and take a screenshot of, we unknowingly downloaded a game that was created by our friends Switch RPG! How uncanny!

For those who are not really into making their own games and would prefer to play those made by others, A free software in the form of RPG MAKER MV Player will be made available. This gives players all the benefits of playing games made in RPG Maker MV without needing to purchase the full game to play them.

Just as there is a lot of visual assets to choose from, there are plenty of audio options as well. There is quite a list of background music and sounds to implement into your game creation. You can use different sounds for different things and interactions. You can play the sounds via the sound test option in the top toolbar. How you use them and where is again, totally in your hands.

The sounds and music do differentiate from one another so there is bound to be something that suits your interests and the feel you would like for your game. The background music can be selected by editing the map details in the lower right-hand corner of the screen. As regards to characters and objects, each has to be implemented individually on their own editing screen.

RPG Maker MV uses a very retro style that is like 8-bit/16-bit. Much like the classic RPGs of the mid 80’s / early 90’s. The text boxes and character art style in the text boxes are much more modern, however. It is a blend of old meets new that just seems to work.

I have found the performance of RPG Maker MV on Nintendo Switch to be very stable. I have not found any issues at all during my playthrough, much to my surprise. I suppose the use of the retro-style graphics helps minimalize any serious demand on the console’s GPU, allowing for a smooth experience as possible.

I must say, that RPG Maker MV on the Nintendo Switch would surely be any aspiring RPG game maker’s dream. It is reasonably simple to use, once you get the hang of the many controls and features. The ease of using tiles to create your game as you see fit makes your world come to life much quicker than the nitty-gritty coding that most developers have to use.

That said, for RPG Maker MV to reach its full potential on Nintendo Switch, you do need to have a real interest in creating your own game. A passing fancy is not enough to warrant buying this game as the many tools and features will have you giving up before you have even started. True aspiring RPG game developers will get a lot out of RPG Maker MV but only if they put in the time first.

I will admit that I lack true commitment and time to really make anything out of RPG Maker MV but don’t let my own impotence deter you. If you have true gumption to and plenty of ideas that you would like to see come to life, RPG Maker MV could certainly be the game for you.

The ability to download other people’s creations is also a great addition as it can help serve as a break from creating your own game. You may even gain inspiration from what other folks have done and try to recreate similar mechanics in your own creations.

RPG Maker MV is an aspiring RPG game maker’s dream come true. With so many assets available including tilesets and sound samples, users can create and play their own RPGs how THEY see fit and then share them with the world!