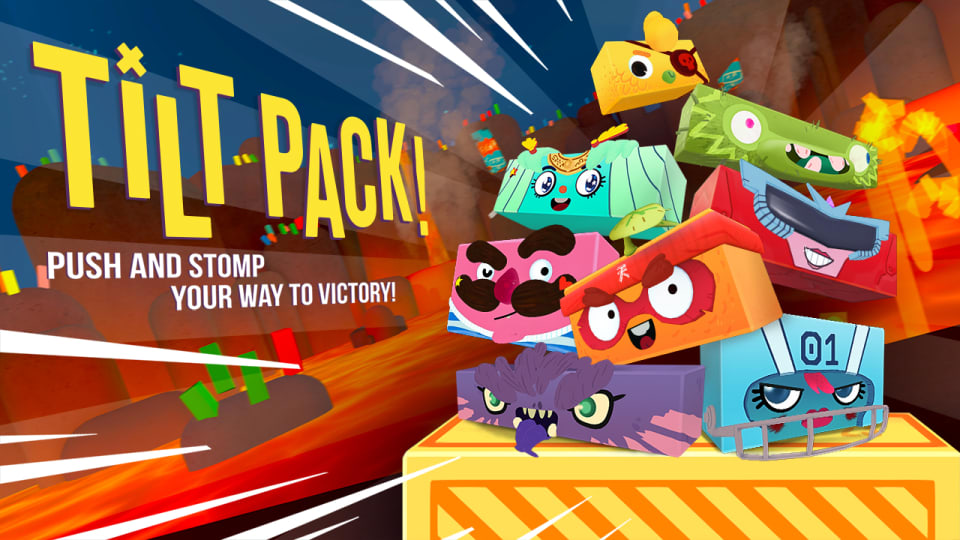 Tilt Pack, officially subtitled, Push and Stomp your way to victory!, released on the Nintendo Switch as an exclusive back in February 2020. It kind of flew under our radar when it first released but we finally got our hands on the game, and well…let’s dive in.

So apparently you are entering into a yearly Tilt Tournament, which has your fighter going head-to-head against a slew of other colorful combatant blocks all in the name of being crowned Ultimate Champion.

In Tilt Pack, you move left and right tilting your box against your opponents in geometric box battle action trying to push your competition off the edge and into oblivion. While the gameplay is pretty straightforward and there’s not much else in terms of buttons and movement options, there are items you can pick up.

There’s a gigantifying pill that will double your block’s size, making the competition squirm trying to escape your now-massive blocky stature. The one-hit mace is great for lining up instant wins, and there’s a boxing glove, among other items, that will help aid in the constant back and forth.

Some levels introduce either a forward or backward movement in 3D where avoiding traps and pitfalls on top of the chaos with your opponents will involve timing and throwing off the balance of your challenger. A volcanic level introduces fall balls of fire which will knock you off the level. Another map has the platform blocks disappearing like a game of Knockout.

There are a few worlds to cycle through and get trophies in the single-player mode. These modes have a quick continue mode in them, to allow you to get back into the action fast, though netting too many deaths will result in a lower trophy.

The worlds have a theme to them, which wasn’t too exact sometimes, as I felt like some of the maps were just reskinned versions of previous ones with world based traps thrown in to make them different.

The cast of characters is also vast with players selecting one of a dozen or so blocks each with their own design and personality with it. There are couch co-op modes that are always welcome additions and Tilt Pack is a fun multiplayer experience if you can find three other friends or family members to play this so-so game of skill and chance.

The audio in Tilt Pack is mostly generic and canned sound effects. While it’s not terrible, there’s nothing here to really discuss and talk about. There are some character sounds when you get hit and die that are different for each playable block. They help to add some characterization to the boxes, but again, not much is there, and it’s not really a highlight of the game itself.

Characters and arenas in Tilt Pack are rendered nicely and while they don’t have a lot of detail, the character models themselves do and when the chaos is heavy on the screen, having a box that is easy to see among the crowd is important (much like why I choose the white-suited Samus while playing Smash Brothers Ultimate).

Performance in the game is alright and never seemed to stutter either in docked mode or handheld. I only notice a few instances of some of the terrain or animated level traps feeling like they were slow and/or sluggish.

Tilt Pack enters the fight as a couch co-op game with a very simple premise, move left and right, flipping your box on its side to hopefully knock off your opponents and win. The simplistic controls of the game make it easy to pick up and play.

That simplicity though will only go so far amongst your friend and family as depth is not one thing this game has. Tilt Pack may make for a fun party game if some adult beverages are included, as the challenge and replayability is low, in my opinion, and may be hard to captivate an audience.

You can do a lot worse when it comes to couch co-op gaming on the Switch, though you can do a lot better as well. It’s hard for me to recommend the game, as it is currently $14.99 on the eShop and will require convincing your friends and family to play a pretty shallow game in regards to gameplay depth.

There’s fun to be had, and the back and forth gameplay can be engaging for a time, but ultimately the game falls flat in concept and delivery. Perhaps wait for a sale if you are interested in getting this Switch game.